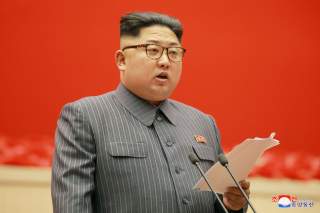 In a rare moment of political consensus, the recent New York Times report on North Korea’s “great deception” on its continued ballistic missile program was “unanimously condemned” by Asia specialists. The universal condemnation was expressed by the readership of the Nelson Report, the gold standard newsletter on U.S. policy toward Asia. The typical media cliche that North Korea is tricking the United States and President Donald Trump is a fool for talking with Kim Jong Un is misleading, incomplete, and potentially dangerous as it could support a case for what would be a disastrous war.

As Korea specialist Harry Kazianis of the National Interest pointed out in The Hill, journalists David Sanger and William Broad inaccurately described the North Korean regime as deceiving the United States by continuing to develop its nuclear arsenal. The Times analysis was based on a report by the Center for Strategic & International Studies (CSIS) that used commercial satellite images of Sakanmol, North Korea, dated from March—before Trump even met Kim in Singapore. (Disclosure: I was previously a CSIS fellow.)

The Times report concludes the following: “The satellite images suggest that the North has been engaged in a great deception: It has offered to dismantle a major launching site — a step it began, then halted — while continuing to make improvements at more than a dozen others that would bolster launches of conventional and nuclear warheads. The existence of the ballistic missile bases, which North Korea has never acknowledged, contradicts Mr. Trump’s assertion that his landmark diplomacy is leading to the elimination of a nuclear and missile program that the North had warned could devastate the United States.”

The problems with the Times story abound. North Korea never agreed to stop its nuclear development, and the sites in question were not hidden or secret since there has been no official disclosure of the sites. Moreover, Kim had publicly ordered the mass-production of nuclear warheads in his 2018 new year’s speech. While it is true that Trump asserted that the North Korean nuclear arsenal was no longer a “threat,” he never claimed that the arms were eliminated. Threat comprises both capability and intent. As for Trump’s claim that he has gotten more done with North Korea than previous administrations, many Koreans agree.

To be sure, Sanger and Broad are highly respected reporters in their fields of Asia and weapons of mass destruction respectively. That’s why it was surprising that they would present the story in such a partisan and inflammatory way. The reaction to the article, however, was predictable. While experts roundly criticized the piece, the press circled the wagons, repeating a common trope that the North Koreans are tricking us, and Trump is a fool for believing them. To intuit that Trump is taking North Korean claims at face value is preposterous, and as is often the case, the situation is much more complicated.

After the article was published, rather than retracting or correcting the flawed article, the Times doubled down. Their communications team defended the reporting on Twitter, to the glee of many non-experts, and the company aired a podcast episode of “The Daily” that repeated the same false claims. On that episode, titled “Diplomacy and Deception,” Sanger spoke about the article with host Michael Barbaro of the New York Times and claimed that the entire world was deceiving itself on North Korea.

Sanger tells Barbaro, “Everyone is deceiving everyone else. The North Koreans are deceiving us about what kind of facilities they are secretly keeping going even while they dismantle some. The Americans are deceiving themselves about how quickly and how sincerely the North Koreans will go about denuclearization because they are intent on showing the president’s one-on-one diplomacy worked. And the rest of the world may be averting its eyes from both the truth of what’s happening in North Korea and what the administration is saying about it because they fear going back to the summer of 2017 when President Trump was still talking about ’fire and fury like the world has never seen’ and seemed about to attack the North Koreans.”

Is the New York Times implying that only it tells the truth and the rest of the world is lying to itself? Having a monopoly on truth is quite a claim given the questionable nature of this very article. Ironically, an article about deception is itself deceptive.

The fact is that the Singapore summit between Trump and Kim last June only produced a broad statement of four realistic goals: the return of American POW remains, which has happened; the undefined long-term denuclearization of the Korean Peninsula; and at the top of the list, the establishment of peaceful U.S.-North Korea ties and a “peace regime” on the Korean Peninsula. That list of goals conveys an important reality: i.e., the necessary condition for denuclearization is an improved security environment. At the very least, that will require a declaration by the US, South Korea, and North Korea officially ending the Korean War, as former U.S. State Department official Joel Wit has argued on Twitter. Such a statement would come at no cost to the United States and yet dramatically change the political incentives for North Korea to meet American demands.

In the meantime, the de facto understanding between the two countries is a “freeze for freeze”—a freeze in missile testing by North Korea for a freeze in U.S.-South Korean military drills. There was no agreement on the cessation of nuclear weapons development. If any actor is to blame for violating the current deal, it is the United States, which conducted drills with South Korea earlier this month. Often simulating the destruction of the regime in Pyongyang, those drills are threatening to North Korea and expensive for it to respond to.

As for the claim of deception, by any reasonable account, the U.S. government knew about the sites in question given its superior surveillance technology. Trump supported that notion in a tweet after the article was published: “The story in the New York Times concerning North Korea developing missile bases is inaccurate. We fully know about the sites being discussed, nothing new - and nothing happening out of the normal. Just more Fake News. I will be the first to let you know if things go bad!”

Beyond the technical points, what’s missing from the journalistic storytelling can be found by incorporating insights from political science. First, all negotiations, including the one in question, operates on at least two levels. Two-level game theory observes that when countries are bargaining, they are simultaneously negotiating with each other internationally and back home with their own domestic constituencies. That means Trump must negotiate with Kim while also negotiating with U.S. public opinion, the press, and the country’s bureaucracy; the same goes for Kim who must negotiate with Trump and his own people. That’s likely the reason Trump said of Kim, “We fell in love”—that’s rapport-building bargaining technique. It is reasonable to conclude that both Kim and Trump must be seen as taking some “win” from the bilateral talks. As long as the United States and North Korea have ceased threatening oblivion, some degree of political spin with domestic audiences is forgivable, especially when Trump’s advisors are more hawkish than he is, as former U.S. official Morton Halperin has pointed out.

The second missing piece of analysis is what political scientists call the security dilemma and the related concept of the Hobbesian trap. These concepts describe the state of U.S.-North Korean relations since the end of the Korean War: Mutual suspicions have driven both countries to build up military defenses to prepare for a possible return to armed conflict. The unfortunate consequence of military build-up, as the theory predicts, is heightened suspicions and a paradoxical deterioration of security, thus driving the continuation of an arms race. While cooperation might be preferred, this vicious cycle will continue. Being the vastly stronger power, the United States is in the position to afford to break this terrible cycle. Again, that means issuing a statement on officially ending the state of war.

Finally, American journalists often omit the critical role of regional politics in East Asia, where I travel frequently and have conducted opinion interviews for more than a dozen years. For all its flaws, Trump’s approach toward North Korea enjoys support among the policy communities in the countries that have the most skin in the game. Japan and South Korea—the countries that are most vulnerable to a North Korean attack—broadly support the reduction of tensions. Moreover, North Korea is surrounded by strong, heavily-armed, hostile states. For instance, Japan has the world’s fifth largest navy. U.S. press reports that ignore those critical points appear myopic and narcissistic to many Asians, and the unrealistic demand for instant denuclearization by U.S. officials such as John Bolton and Mike Pence looks petulant and blinkered to many regional specialists. Sure, it may be part of the American negotiating strategy—Trump is the good cop and Pence is the bad cop—but it should be geared toward a realistic outcome.