What Pearl Harbor Still Has to Teach Us 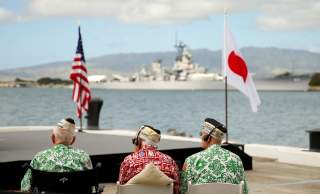 Thinking about Pearl Harbor and avoiding inevitable war, I recently revisited the solemn Arizona battleship memorial at Pearl Harbor while on a brief layover in Hawaii, after spending two enlightening weeks traveling deep within the complex Russian Far East.

Returning to such hallowed American waters and ground on the heels of my trip to Northeast Asia brought home to me the unsettling fact that events like Pearl Harbor—a carefully planned surprise attack—often grow out of an adversary’s complete and utter conviction that war is inevitable. Once that conviction takes root, it’s all too easy for a nation to interpret even unintentional slights or innocent actions as signposts on the “road to war.” In today’s lightning-fast world, a major misunderstanding or miscalculation could spell catastrophe for the planet.

In the 1930s, Imperial Japan entertained major regional ambitions in Asia that met with irritating resistance from a number of nations that included Great Britain, the Netherlands, France and the United States. Japan—certain of its superiority and destiny—viewed the United States with a mix of disdain and suspicion. Any U.S. action that appeared to be part of a strategy to interfere with Japan’s expansive plans reinforced a growing Japanese belief that going to war was just a matter of time.

In the years immediately before Pearl Harbor, the Japanese bristled at several U.S. actions which were undertaken to warn the island country off of its aggressive regional adventuring, especially its brutal offensive campaign in China. When the United States moved its mighty, battleship-heavy Pacific fleet from San Diego to Hawaii in 1940, Japan viewed the decision as a direct challenge. When the United States followed the next summer with an oil embargo and by freezing Japan’s assets, the emergent Japanese military “war faction” was primed to lash out.  Even Harvard-educated Japanese Admiral Isoroku Yamamoto joined in the war preparations—albeit with misgivings—planning every aspect of the surprise attack into Hawaii designed to shock its target to the core from the first second of hostilities.

With great secrecy, the Japanese First Air Fleet sortied with six aircraft carriers in November 1941 and within two weeks arrived early on December 7, about 230 miles northwest of Honolulu. They launched their air attack in two waves, catching the United States off-guard and completely shattering the battleship fleet. By sheer providence, our aircraft carriers were out of harbor and spared destruction. Simultaneously well-coordinated Japanese forces launched a massive military sweep through resource-rich British and Dutch Southeast Asia, including Indonesia, Hong Kong, Singapore and the U.S.-protected Philippines.

How could a smaller, less-developed nation wreak so much havoc in such a short time? By capitalizing on a U.S misperception of Japan and by using surprise and deep study—critical elements for any nation that feels out-manned, outgunned and out-resourced as Japan did in 1941. Its military leaders studied and learned our key vulnerabilities, and then planned and brilliantly executed their preemptive surprise attack. They leveraged every possible innovation and lesson-learned. These included making the most of new carrier tactics and aircraft weapons innovation at Pearl Harbor, as well as unprecedented amphibious operations across the western Pacific. On land, Japan’s fast-marching light infantry outflanked major defended bastions such as Singapore in Southeast Asia.

At Pearl Harbor early on a peaceful Sunday morning, the underestimated Japanese Navy dramatically changed notions of naval warfare and military history by wrecking an entire battleship fleet by air attack. Well-designed airplanes with trained pilots launched from Japanese aircraft carriers dropping armor-piercing bombs and shallow-running aerial torpedoes that knifed into our helplessly-moored battleships. Photos taken at the time showed major Japanese rehearsals with Pearl Harbor mock-ups on the eve of the attack. The Japanese appeared also to take a lesson from a smaller, but effective British operation a year earlier, when torpedo-laden biplanes took aim at Axis Italy’s Taranto Harbor.

How does what happened at Pearl Harbor relate to the state of the world today? How are we being studied today? Once again we’re seeing some of the same drivers of the conflicts of the 1930s bubbling to the surface. An insatiable need for resources. Ambitions for growth. Ideologies that put the accent on nationalism and “destiny.” And rising frustration among ambitious players who resent the United States with its allies and partners standing firm against aggressive behaviors and extralegal territorial claims.

Pearl Harbor was a textbook demonstration of the powerful advantage of surprise and asymmetry when employed by a self-aware lesser power against a seemingly stronger adversary. With today’s globally deliverable weapons of mass destruction, add in a mindset that sees war as unavoidable and our world faces a recipe for disaster. Asymmetric surprise today would likely begin in a blink using cyber, artificial intelligence (AI) and other new-age technologies designed to stagger and paralyze in the initial phase of a conflict. By throwing a large adversary off-balance, this strategy would even the playing field in any major non- or pre-nuclear war...or worse. Emboldened by success, the seemingly lesser power might believe—as Japan did—that it can preemptively subdue one or more rivals or foes.

As an open, liberal democratic nation we remain prone to being surprised and therefore must always be on watch with high readiness. As such, military exercises and other defense preparations with our numerous like-minded allies and partners remain vital and non-negotiable. We must also stay attuned, however, to the drivers and perceptions that could make a potential adversary believe conflict is unavoidable. Accordingly, and especially in negatively trending relationships between major powers, firm, patient work via frank, persistent and low-publicized dialogue combined with unambiguous actions must continue even while frustrating. While no guarantee of staving off a crisis, such measures designed to chip away at core sources of deep distrust and misunderstanding could go a long away at reducing perceptions of unavoidable war as occurred within Japan before Pearl Harbor.

Such was my pensiveness while standing and thinking about what happened at Pearl Harbor just after traveling across complex and historically volatile Northeast Asia.

Brigadier General (retired) Peter B. Zwack, former U.S. defense attache to Russia (2012-2014), is the senior research fellow for Russia-Eurasia at the Institute for National Strategic Studies (INSS) at National Defense University (NDU). The views expressed here are his own, and do not necessarily represent those of NDU, the Department of Defense or the U.S. Government.