What Putin's Reelection Means for Russia and the World 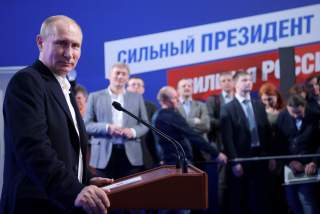 No one should have been surprised by the results of Sunday’s presidential election in Russia. Official figures maintain that nearly 60 percent of eligible voters cast ballots, with incumbent Vladimir Putin cruising to an easy victory with more than three-quarters of the votes. Even assuming that the figures were massaged—note the inflated voter participation counts and tallies for Putin, especially in the republics of the north Caucasus, where totals approached Soviet-era levels—what can we conclude from the elections?

The first and most noticeable conclusion is that the center of gravity in the Russian opposition to Putin still lies with Communists and nationalists, not liberals and democrats. The various “red/brown” candidates collectively took some 20 percent of the vote, meaning that two in ten Russians who voted preferred anti-liberal, anticapitalist, anti-American choices. In contrast, the three liberal-leaning candidates did not, collectively, crest five percent in the tally. For those in the West who are counting on a Maidan or Tahrir Square–style uprising that will depose Putin, his replacement would be more likely to antagonize the West rather than to seek reconciliation.

The second is whether or not the boycott of the election called by anti-corruption campaigner Aleksei Navalny backfired. No one expected Putin to lose the election, but at least some of the 40 percent of Russian voters who stayed home might have casts ballots for candidates like Grigory Yavlinsky, Boris Titov or Ksenia Sobchak—and sent a signal about the constituencies that these political figures can credibly speak for. Given the likely reaction to Putin’s reelection will be apathy rather than protest, and given the emergence of a new and perhaps long-lasting feud between Sobchak and Navalny, the continued failure of Russia’s liberal-democratic sector to coalesce will continue to have a negative effect on Russian politics for the foreseeable future.

So Putin returns to office. What is this likely to mean for Russian domestic and foreign policy? Allow me to offer a few predictions.

First, Putin himself, in his victory speech, alluded to his age and the reality that he will not be around forever. It is in this forthcoming six-year term that Putin will have to set the foundations for a durable transition. I expect to see a government shakeup, perhaps later this year, in which a number of the long-time figures who have dominated the Russian government for the last decade and a half will be honorably retired to clear the way for new faces, and for a new cadre of fortysomething Russian politicians to assume greater prominence.

One of the ways Putin can ensure a rotation is to better guarantee that those who retire still retain some power and influence and, much more importantly, their property. This will also be critical to his own plans to eventually hand over power. So I would also expect to see, in the coming years, more efforts to codify guarantees and amnesties into law, culminating in a series of arrangements that would preserve Putin’s own stake (and that of his children) intact as a condition for a transition of power.

Given how Putin himself was selected, I also cannot rule out that Putin might not wait until 2024, but instead choose a strategic resignation at an earlier date in order to better stage-manage the process of succession.

Now that he has won, will Putin, to paraphrase Barack Obama, now be able to show more flexibility on the world stage? We have three tests emerging: finalizing a settlement with Japan, the conflict in Ukraine and the Syria intervention.

Prime Minister Shinzo Abe is expected to visit Russia later this spring for yet another summit with Putin. Abe continues to strive for a settlement to the Kuril Islands matter, and for a formal peace treaty with Russia that would enhance Abe’s own standing and nationalist credentials. Putin has shown unwillingness to bend on the territorial issue in the past, but now that he has secured reelection, will he take the position that ceding some territory back to Japan is still a net plus, given the annexation of Crimea? And would he be willing to trade land for an investment that would help develop the Russian Far East?

Russian plans to bypass Ukraine as a transit country continue, despite efforts by some EU countries and the United States to impose roadblocks. At some point, it makes sense for Putin to show much more willingness to offer concessions on the Donbass question, especially with the return of a grand coalition government in Germany and the likelihood of a more pro-Russian administration in Italy. Will we see in 2018 some dramatic shift in the Kremlin’s position?

Finally, the Syria intervention has largely served its purpose. Now, the task is to disentangle Russia from a possible quagmire in the Middle East—having observed America’s own difficulties in disengaging from the region—while still retaining the benefits the Kremlin has obtained. After completing the effort of restoring the Bashar al-Assad regime’s control over most of the Damascus suburbs, my sense is that Putin will not continue to offer the regime any sort of blank check, and will shift efforts to forging a series of regional balances (Israel-Iran, Iran–Saudi Arabia, et cetera) based on Russian mediation.

All of this takes place against the backdrop of worsening U.S.-Russia relations. That dynamic will not change as a result of the March 18 polls, and if President Donald Trump is removed during his first term or defeated in 2020, the Kremlin expects that any Republican or Democratic successor would be more hostile. So we are likely to see a Russian foreign policy that continues to focus on ways to divide and isolate the United States from its Asian, Middle Eastern and European allies. In that sense, not much will change as a result of the elections.

Putin is staying—but he is likely to take the initiative to shape both Russia’s domestic politics and its international position to his liking. This has been no secret to the U.S. national-security community, but as long as the United States remains in reactive mode, then Putin will continue to stay one step ahead in the game.