What Rare Earths Tell Us about China's Competitive Strategy 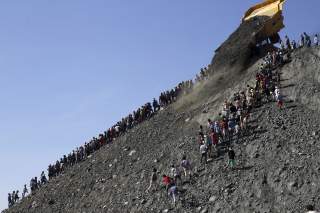 The recent debate over whether or not China will carry through on its threats to stop exporting rare earth minerals to the United States is an important one. It raises deeply unsettling questions about the strength of America's defense industrial supply chain. But Beijing’s monopolization of the global rare earths industry gives it far more than a card to play in an escalating trade war. The game is far bigger and the stakes higher than even many national-security experts seem to realize.

In the minds of Chinese strategists, this issue is ultimately about which nation, China or America, wins the central struggle of the twenty-first century, the race for world leadership. Obviously, they intend to win and to win big.

The Chinese Communist Party (CCP) considers rare earths to be essential for growing China’s power and eclipsing the United States. Official Chinese propaganda outlets recently called rare earths “strategic resources” for the “six new technology groups” that Beijing sees as engines of China’s future strength. These include information technology, medical technology, new materials, new energy sources, space technology, and advanced shipbuilding. According to the report, a major breakthrough in the application of rare earths is being made every five years, and one out of every six new inventions involves these minerals.

China’s government has long viewed rare earths as a domain of strategic competition. In 2015, one of the Chinese military’s official propaganda arms published an article declaring rare earths to be “strategic mining resources, especially important for protecting state security and winning modern warfare.” The article went on to call rare earths “the lifeblood of national defense” and stated darkly that: “Now the struggle between nations for these strategic resources is becoming increasingly fierce. So we must . . . strengthen our protection and control over these strategic mining resources.”

To this end, China’s authoritarian leaders have successfully executed a series of centralized plans to lock up the global rare earths market. Rare earths are part of “Made in China 2025,” an ambitious plan for China to undermine America's high-tech industry and economic leadership by institutionalizing unfair trade practices as a matter of policy. They are also highlighted in China’s 13th Five-Year Plan (2016–2020) for science and technology, which envisions using rare earths to develop futuristic technologies that will fuel China’s continued economic growth and rapid military buildup.

To recruit the foreign brainpower needed to maintain primacy in rare earths, the CCP has tapped into its Thousand Talents Plan, a shadowy government scheme to recruit thousands of the world's top minds to work in China and contribute to cutting-edge strategic programs. While the Chinese government has hidden the identities of the Americans who have been lured into the program, it is known that one of the organizations recruits are assigned to is the Baotou National Rare Earths High-Tech Industrial Development Zone in the mountains of central China, a complex that is reportedly part of China’s nuclear program.

The CCP’s overarching strategy for rare earths has hinged on China’s ability to leverage predatory economic policies. Here’s how it works. On the one hand, Chinese state-backed companies exploit the openness of the international system to attack American competitors, poaching their talent, stealing their technology and knowhow, and underselling them to erode their competitiveness.

On the other hand, China uses its great wall of protectionism to keep foreign companies from gaining any defensible position within its own market. American companies in China, while generally profitable at first, over time are systematically infiltrated, manipulated, corrupted, and in the end, either taken over by CCP-controlled companies or sent packing. The result is that rare earths products that used to be made by U.S. companies are increasingly being made by Chinese military-affiliated state corporations.

The results of this strategy have been jaw-dropping. China currently has the world’s largest rare earths reserve stockpile and is the only country capable of producing every known rare earth mineral. Worse, it controls 80 to 90 percent of the global market for rare earths products, leaving the United States dangerously dependent on it. This is a stunning development considering the United States was the world’s largest producer as recently as the 1980s. And while China has replaced the United States as a world heavy-weight exporter, it is also a gigantic consumer of what it makes at home.

For American policymakers and national-security professionals, the story of China’s domination of rare earths should be an instructive one. The same basic strategy is being leveraged across all the drivers of future military, technological, and economic growth, from pharmaceuticals to aviation and artificial intelligence to 5G communications. China’s mega companies don’t have to make a profit; they are an arm of the CCP, subsidized by the state and the military in countless ways. Nor do they have to follow any international law. What they absolutely must do, however, is to follow Beijing’s orders and ruthlessly overtake their American rivals. In the absence of a countervailing strategy, this will continue to be a winning formula for Beijing.

With minerals, China has found a soft underbelly to exploit. Despite minerals becoming increasingly important to every dimension of America’s high-tech economy, domestic mineral production has withered. China’s adversarial approach to domestic mining has pushed investment overseas notwithstanding the nation’s vast mineral reserves. The result has been an import reliance that Sen. Lisa Murkowski (R-AK) recently called the nation’s “Achilles’ heel.”

It is imperative for the continued security and prosperity of the United States that Washington wakes up to China’s strategic successes (and its own policy shortcomings) and begins to act accordingly.

So far, little has been done to ensure America is able to supply its own rare earth mineral needs. This leaves the nation, and especially the military, in a precarious situation. The Chinese government views the United States as an enemy and has demonstrated that it will go to great lengths to undermine American national-security interests. So, too, should American leaders be willing to take all necessary measures to break free of Beijing’s iron grip. Prioritizing American rare earths mining and encouraging domestic investment, production, and stockpiling is the place to start.

Ian Easton is a research fellow at the Project 2049 Institute and author of The Chinese Invasion Threat.