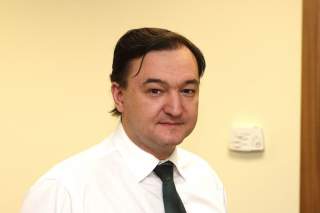 The Magnitsky Act—Behind the Scenes, a controversial new film about the death of Russian auditor Sergei Magnitsky, was shown on June 13 at the Newseum in Washington, D.C. The filmmaker, Andrei Nekrasov, was present, and the film was introduced by journalist Seymour Hersh. Nekrasov is known for his documentaries such as Rebellion: The Litvinenko Case, and Russian Lessons, about the Russo-Georgian War. He has frequently criticized the Russian government and has been targeted for his outspoken views. Hersh began the event by commending the Newseum for being willing to host the film, as it had been canceled in several European venues due to legal pressure from Magnitsky’s former employer William Browder (wanted in Russia for tax evasion, but now living in London) and Sergei Magnitsky’s family.

The generally accepted narrative of the Magnitsky affair is that lawyer Sergei Magnitsky was employed by the American-born owner of Hermitage Capital Management, William Browder, in an effort to investigate the theft of assets from his companies by the Russian police. Magnitsky then courageously exposed these actions, was arrested and died in pretrial detention in a Russian prison after being tortured, beaten and denied medical care. It is this story of heroism that Nekrasov set out to tell, leaning heavily on Browder for the details of the case.

The first portion of the film is the original documentary interspersed with voiceovers by Browder and reenacted by actors. Following Browder’s narrative arc, it traces the story of Browder and Magnitsky, starting from the police raid of Hermitage Capital Management’s offices. Browder claims that the police stole original company registration papers in order to re-register Browder’s companies in different names. The police, along with members of organized crime, stole $230 million from their own government in the form of Browder’s tax payments. To investigate, Browder hired the “lawyer” (in reality, according to Magnitsky himself and those closest to him, he was an accountant) Sergei Magnitsky to investigate where the money had gone. Magnitsky discovered an intricate web of companies and bank accounts connected to members of the Russian police. He was largely ignored until police came to his home and arrested him. He remained in pretrial detention, where he was encouraged to take back his accusations. The police involved in the fraud then tortured him to attempt to break him, but he would not withdraw his testimony. Magnitsky became very ill and demanded to see a doctor, but his request was denied. Finally, he was handcuffed and beaten for over an hour until he died.

All of these events are portrayed by actors, but as Nekrasov reviews the footage, he begins to feel uneasy about some gaps and contradictions in Browder’s story. The Russian Presidential Human Rights Council suggested that Magnitsky died of acute heart failure, not injuries—a declaration easy to pass off as a Russian coverup. But when Nekrasov interviews Magnitsky’s mother, she too denies some of Browder’s narrative and says that she does not believe her son was intentionally murdered—rather, medical negligence after his decline into ill health caused his death.

Browder’s crusade to tell the story of Magnitsky led him to Congress, where he shared Magnitsky’s story, leading to the passage of the Magnitsky Act, seen in the eyes of Russia as “American geopolitical bullying.” The act placed travel bans and financial sanctions on those implicated in the mistreatment of Magnitsky. Russia responded with the Dima Yakovlev Act, which banned the adoption of Russian children by Americans, and a retaliatory list of sanctioned Americans that they believed to have perpetrated human rights abuses. Pavel Karpov, the main villain in Browder’s story, spoke to Nekrasov on camera. He explained that there was “no sign of [Magnitsky] exposing us” and that Browder had concocted “a very contrived plot” to distract from his own misdeeds. Karpov noted that in 2004, Browder’s company Kamea was already under investigation for tax evasion. Magnitsky’s accusation of Karpov is the fundamental backbone of Browder’s story—though Karpov asserts, and Nekrasov discovers, that Magnitsky’s original testimony contains no reference to Karpov or any accusations at all. The English translation of the testimony, however—which Browder provided to investigative committees, including the Council of Europe—shows a testimony more amenable to Browder’s story. In the original Russian, it is clear that Magnitsky made no accusations; rather, he was being questioned by the police as a witness in the investigation of Browder. Magnitsky was questioned about the $230 million, but newspaper records show that this figure was already publically known.

Since Magnitsky’s supposed accusation was the reason for his arrest, Browder’s story begins to unravel. For months, Nekrasov has difficulty tracking down Browder for comment, and has to confront him, rather unsuccessfully, at a book signing. Eventually, they meet on camera, and as Nekrasov explains his findings, Browder grows visibly uncomfortable and accuses Nekrasov of spreading Russian government propaganda. This thought haunts Nekrasov, and he begins to wonder if he is becoming a part of the system he denounces. But he decides he is willing to accept the consequences in his search for truth. Further investigation reveals that having an original copy of a company’s registration—the alleged pretext for the police raid—has no bearing on re-registration. It can only be done by an owner or a designated power of attorney. Several such powers of attorney were set up, at least one of which Magnitsky acknowledged that he knew but did not comment on during his testimony.

Nekrasov used the analogy of a car to explain Browder’s motivations for claiming the companies and their assets were stolen—if your car is stolen, and the thief crashes the car, it isn’t your fault. The car is no longer the owner’s responsibility. Likewise, if someone steals your money and uses it irresponsibly, you are not to blame—that is, unless you orchestrated the “theft” yourself. Those who benefited from the stolen funds have a strong motivation to keep their activities a secret, which Nekrasov suggests is the case with Browder. The U.S. investigation into the Browder/Magnitsky affair revealed that only Browder and his associates were questioned, all documents reviewed were from Browder himself, and no cross-checking was done to make sure the data was accurate.

Nekrasov goes on to interview others involved with Browder in the past, and concludes that Magnitsky was involved in preparing the documents involved in the fraud. Due to his death, however, the Russian investigation was closed. Nekrasov, who examined Magnitsky’s prison writings, sees no reason to believe that he was tortured in prison, and Magnitsky does not claim that he was singled out among prisoners for harsher treatment. For the first eight months, in fact, he was given medical attention when necessary. It was only after he was transferred to another prison that his health needs were neglected. Nekrasov believes, as stated in the official Russian investigation, that Magnitsky died of neglect and was not intentionally murdered. He was a victim of the abysmal Russian prison system. All of the alleged events surrounding his death, he asserts, can be traced back to Browder’s unsubstantiated statements.

The movie was approximately two and a half hours long, after which point there was much heated discussion in Russian and English among audience members, ranging from strong approval to shouts of “Shame!” and “Lies!” Nekrasov, however, stood by his claims and announced that the movie would be shown in Norway in the near future, despite an earlier ban instigated by Browder. He also hoped that the movie would draw attention to the “error” of the Magnitsky Act, and reasserted that he makes no claims to know everything that happened in the Magnitsky case, just that Browder’s stories are inconsistent with the existing evidence and that Browder has a huge network of allies in the West that allows him to peddle his narrative as the only legitimate one.