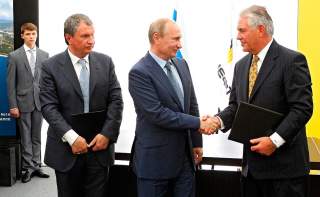 In nominating Rex Tillerson as his secretary of state, Donald Trump is attaining one of his major political goals: he is putting a distinctive personal stamp on U.S. foreign policy at a time when Washington’s relations with Russia are fraught with the possibility of a hot war from Ukraine to Syria. Not that Tillerson’s confirmation is guaranteed: Democrats and Republicans are suspicious of his ties to Vladimir Putin, and they will subject the ExxonMobil chief executive to intense scrutiny during next month’s Senate hearings.

But Trump has an idea of where he wants to go in dealing with the Kremlin and he is going there. The skeptics attribute his ambition to some sort of bromance with the Russian autocrat. Few recognize the substance of what he is trying to do; and those who do run the risk of being denounced as Putin apologists.

Russia’s new self-assertiveness has inspired a new school of American hawks seeping out from the Pentagon and State Department and rumbling through the nation’s leading opinion pages and in the Senate foreign relations and armed services committees. Putin, we’re told, is bent on reviving a Russian empire that dissolved 25 years ago this month.

Meanwhile, the recent CIA report on Russia’s alleged involvement into America’s presidential election has stirred a hornet’s nest of outrage extending across the political spectrum. It is a controversy that will not easily subside. Such disparate critics as former Republican presidential candidate John McCain and Democratic Senate leader Chuck Schumer, among many others, have formed an unlikely and politically powerful alliance.

Trump profoundly disagrees with the Washington consensus for good reason. We do not know for sure, as even the neo-conservative Wall Street Journal suggests, that Russia interfered to help Trump win the presidency. We do know, however, that U.S. intelligence agencies sometimes offer wrongheaded judgments: think of the Bay of Pigs, the Tet Offensive and the claim — a “slam dunk” according to then CIA director George Tenet — that Saddam Hussein possessed WMD before the US-led invasion in 2003.

Even if the allegations are true, they are hardly surprising. After all, great powers often try to influence events in other nations, including other great powers. Indeed, Washington has been using NGOs, the CIA and the National Endowment for Democracy to interfere in Russian politics for years, a strategy which Putin sees as ultimately aimed at toppling his regime.

It’s not as if Washington has refrained from meddling in the internal affairs of other states, including allies. For instance, in 2013, a German newspaper alleged that the National Security Agency had been hacking Angela Merkel’s mobile. Several years earlier, the German government of Gerhard Shroeder requested the withdrawal of several CIA agents stationed in Germany because of their alleged activities in industrial espionage.

Yet the irony is lost on the U.S. media. On July 15, 1996,Time published a gushing cover story: “YANKS TO THE RESCUE: The secret story of how American advisers helped Yeltsin win.” Two decades later, on September 29, 2016, the same magazine ran a cover story lamenting “How Russia Wants to Undermine the U.S. Election.”

One is left with the impression that the standard of behavior of the United States is really not much different from that of other nations and yet it continues to insist on applying different standards to itself and to others. “Such application of double standards,” as founding TNI editor Owen Harries once argued, “is bound to store up trouble in the form of cumulative resentment and declining credibility.” After all, credible rule-setters must themselves respect the rules.

So if it is indeed true that Moscow intervened to assist Trump’s presidential campaign, the Russians are playing a game the Americans themselves all too often play.

But Trump distinguishes himself from Washington’s hawks in another way that could have profound implications for America’s grand strategy. Henry Kissinger has long argued that the key to success in diplomacy is to put yourself in your adversary’s shoes and see the world from that perspective. In this light, the expansion of NATO and the EU into Russia’s traditional sphere of influence and the deployment of U.S. missiles into Eastern Europe is a bit like the Kremlin signing up Latin American states in a military alliance and then planting missiles there pointing at the United States.

From this standpoint, Russia’s conduct has largely been reactive to misguided western policy. For example, its March 2014 military incursion into Crimea, home of the Russian Black Sea Fleet, was in response to the western-backed coup to topple a democratically elected, pro-Russian regime in Kiev a month earlier. It may have been a miscalculation on Putin’s part, but it was nonetheless a rational calculation.

All this happens to be the view of Trump and his advisers. Which is why the president-elect’s nomination of Tillerson suggests U.S. foreign policy could enter a period of major reappraisal. From the onset of the Cold War in 1947 to the fall of the Berlin Wall in 1989, the United States was engaged in a great moral and ideological struggle for survival, and the American people committed themselves to prevailing in that long twilight struggle.

Since the collapse of Soviet communism, Washington embraced a policy of global leadership where America, as the “indispensable nation” would exploit “the unipolar moment” and pursue a “benevolent global hegemony.” Following the 9/11 terror attacks, American outrage, taken together with American exceptionalism and the mental habits of American preeminence, culminated in the Bush doctrine of regime change and aggressive unilateralism.

In the wake of the Iraq debacle, President Obama has set out to redefine the U.S. role in the world in a way that reflects America’s limited resources and changing circumstances. But his administration’s approach to Russia has too often been gripped by habit and a failure to take into account Moscow’s strategic sensibilities.

Putin has been determined to protect what Russia has long believed are its vital interests in its near abroad and along the eastern Mediterranean Sea. The task for the incoming Trump administration is to reach an accommodation with Moscow based not on western ideals or dreams of a Pax Americana, but on sober power realities.

In selecting Tillerson as his secretary of state, Trump will help tone down the bombast and restore a dialogue with Russia. As a result, the new president will set out to create a new peace with an old foe.

Tom Switzer is a senior fellow at the United States Studies Centre at the University of Sydney.