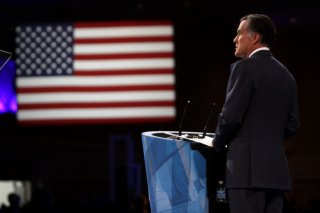 Over the past week, the Beltway has been atwitter over the prospect of a Jeb Bush–Mitt Romney face-off for the 2016 Republican presidential nomination. Partisans of both men have been out in force. Team Romney, led by longtime political operative Stuart Stevens, has scoffed at Bush’s presumption of inevitability, while the ubiquitous talking head and Bush adviser Anna Navarro has mocked Romney’s penchant for misspeaking.

Yet if Bush and Romney surrogates sound like they’re straining to come up with some substantive differences between the two men, it’s because they are. The similarities between the two are difficult to miss: both are the scions of wealthy, high-profile families, and both are thinly credentialed for the office they covet. By the time 2016 rolls around, both men will have been out of office for over a decade. On the other hand, before entering politics, Romney founded a hugely lucrative leveraged buyout firm (Bain Capital), while Bush’s pre-political career is rather a lot like his older brother’s in that, to borrow a line from Churchill, he has much to be modest about.

What are mainstream Republicans to think?

One notion that they ought to summarily disregard is the idea that the choice between Bush and Romney boils down to a choice between a “fresh start” and “the past,” for there can be no possible rationale for a Bush candidacy other than his famous last name, one which most assuredly belongs to “the past.” In a sense, a third Romney campaign, despite being criticized, makes some sense; after all, if, as the Washington Post reported last week, American voters will not be receptive to either a Bush or Clinton restoration, then why not?

Romney, though himself the son of a former governor and GOP presidential candidate can hardly be placed in the same dynastic league as the Bush, Kennedy, Roosevelt or Adams clans. If he gains the White House, Romney would simply remain on that long list of other successful father-son politicos: Abraham and Robert Todd Lincoln, William and Robert Taft, Huey and Russell Long, Edmund “Pat” and Jerry Brown, William and Richard Daley, Mo and Mark Udall, Ron and Rand Paul, Mario and Andrew Cuomo, and David and Mark Pryor.

I’m encouraged by the idea of his running because he is the only candidate in the Republican field capable of saving the Republic from yet another Bush presidency. The deficiencies of the second Bush administration (2001-2009) are by now well known—there is neither time, nor world enough to expound upon the ruinous ramifications of his two terms in the White House. Yet even the presidency of Bush the Elder (who was arguably the last competent president we’ve had) should serve as something of a cautionary tale for those few existing Republicans left who disapprove of America’s hyperactive foreign policy.

After all, as the noted historian Jean Edward Smith has written, many of the more dubious habits of our recent presidents, like the tendency to over-personalize and subsequently over-inflate interstate conflicts, date to Bush the Elder’s conduct in the lead-up to the First Gulf War. Much of the reflexive hawkishness as relates to so-called American “interests” in the Near East—to say nothing of the rhetorical bombast—of the second Bush are little more than the logical outgrowth of “Poppy” Bush’s own chest-thumping before, during and after the first engagement with Iraq.

Republicans of a realist bent might also take heart in a Romney candidacy, because his entry into the race would further divide the rather large and influential bloc of uber-Hawkish voters made up mainly of Christian fundamentalists and conservative—neo and otherwise—pundits. These last, as we have seen in recent months, are scrambling to find a suitable marionette to carry forth their grand designs; both David Frum and Jennifer Rubin have written admiringly of Texas governor Rick Perry while Hugh Hewitt seems all in for Romney. Meanwhile, Mike Huckabee will no doubt carry large segments of the evangelical vote. The fragmentation of the field will no doubt bolster the chances of realist standard bearer, Senator Rand Paul.

It is clear that as Romney gears up for a third presidential campaign, he shares Barbara Bush’s pithy assessment that “we’ve had enough Bushes” in the White House. Let’s hope Republican primary voters share the sentiment.