What Is the Driving Force in American Political History? 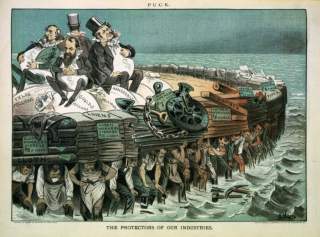 NOT EVERYTHING published between covers really adds up to a book. The distinguished liberal historian Sean Wilentz’s latest release, The Politicians and the Egalitarians, doesn’t cross that threshold. What he’s given us instead is a series of quirky but engaging sketches of (mostly) major figures and episodes in American history from the founding through the mid-twentieth century. These sketches readily betray their origins as review essays (in the New Republic and the New York Review of Books) on the work of other authors, albeit on subjects he knows well. Wilentz is hardly the first writer to have had the experience of looking back on a body of casual past work and asking: What was I getting at with these? The theme he has found to his pudding turns out to have been the dual importance of partisan politics and the passion for equality in American history.

It’s a bit unjust—but only a bit—to blame authors for the sensationalized subtitles publishers like to put on books these days. If partisan politics and egalitarian enthusiasm constituted a hitherto “hidden” element of the “history of American politics,” it will come as news to anyone who has read any American history, not least Wilentz’s own estimable work. So let us join Wilentz in his statement of the obvious: both egalitarian passion and the rough-and-tumble of politics have shaped American history.

The compensation for the banality of what The Politicians and the Egalitarians stands for is the superior interest of what the book stands against: above all, the proposition that partisan politics, including in its highly polarized form today, is the main obstacle standing between America and political progress. He also advances two corollary claims. The first is that postpartisanship or nonpartisanship is a spurious objective, either as an end in itself or as a prerequisite of progress. The second is that radical politics divorced from the partisan fray can achieve nothing on its own. Radicals need practical politicians if even a partial fulfillment of their ambitions is to come to pass. Progress has been the product of fierce pursuits of a partisan agenda against fierce partisan opposition.

Of what does progress consist? Wilentz writes approvingly that “the driving force in American political history has been the effort to curb the power of concentrated wealth, whether the power of the slaveholders or the power of industrial plutocrats.” Equality, then—more precisely, an aversion and opposition to economic inequality—is at the center of the American story.

Wilentz’s conspectus begins with framing chapters on “the postpartisan style” and the “forgotten egalitarian tradition.” He proceeds to illustrative examples, chapters on Thomas Paine, Thomas Jefferson, John Quincy Adams, John Brown, Abraham Lincoln, the organized labor movement in the Gilded Age, W. E. B. Du Bois, Theodore Roosevelt, the role of left-wing radicalism, the Cold War and Lyndon Johnson. It would be misleading to say that these chapters develop the story of the pursuit of equality through partisan politics. Again, this is the problem of the cart and the horse—a collection of essays thematized after the fact. Had The Politicians and the Egalitarians begun with its thesis and then taken up exemplary historical figures and episodes to illustrate it, we would at least have half a book—the missing half being due consideration for evidence that runs counter to the illustration of the thesis.

As it is, though, we are at the mercy of the previous requirements of the editors of the New Republic and the New York Review of Books. How on earth can one write a book on the relationship between partisan politics and the pursuit of economic equality without a chapter on Franklin Roosevelt? While FDR and the New Deal do come up here and there, the omission is jarring. Similarly, the question of how to assess the radical Left’s view of the Cold War: Is that really best answered by a dismantling of Oliver Stone and Peter Kuznick’s embarrassing, long-forgotten The Untold History of the United States? No, that’s not how one would write a book about politics and equality, but then again, the chapters of The Politicians and the Egalitarians were not so much written as repurposed.

At one point near the end of the chapter on Stone and Kuznick, one finds this strange passage:

The authors also devote many thousands of words to criticism of such destructive American policies as Ronald Reagan’s in Central America and George W. Bush’s in Iraq, but much of this will be familiar to readers of the New York Review of Books and other organs of liberal opinion.

What? Why the evocation, out of the blue, of the NYRB as a touchstone of familiarity? Obviously, because this chapter appeared in the NYRB. Even so, when I read the book in galley, the crudity of the reference stuck out, and I was sure that someone—the author, his research assistant, his editor at Norton?—would smooth it over before publication. But there it is between hard covers. I checked the source, where I discovered that what I was now reading was in fact the version postsmoothing, not prior to; the essay originally said “will be familiar to readers of these pages.”

WILENTZ’S INTRODUCTION offers a halfhearted self-exculpation. “Doing full justice to this interpretation would require a book many times longer than this one.” It might. But 360 pages of carefully considered, tightly composed historical analysis of the relation between partisan politics and the pursuit of equality probably would have gone a long way, had the author chosen to take that approach.

That’s because Wilentz is a clear and graceful writer, and his judgment on historical matters is unfailingly carefully considered and backstopped by a life of research. He is a liberal’s liberal, both in the classical sense and in the current meaning of the term in American political life. His conviction seems unshakable, and if he evinces little interest in engaging readers who do not share his prejudices concerning current political affairs, he nevertheless performs in these pages a public service of general value: He has no use for the “abstract moralism” of contemporary academics who wrench historical figures such as Jefferson and Lincoln from the context of their time in order to find them culpable for a failure to live up to à la mode standards of ethical conduct and right thinking. And he is prepared to call such professors out and rebut them.

One such recipient of Wilentz’s stern judgment is John Stauffer, whose 2009 Giants is a dual portrait of Lincoln and Frederick Douglass. Wilentz rebukes Stauffer for the contrivance of his attempt to paint a portrait of parallel lives and for making far more of the bond between Lincoln and Douglass than the two themselves did (they met on only three occasions). Worse, however, Stauffer

departs most vigorously from the standard accounts [of the two men’s lives] by pushing hard what evidence he can muster in an excursion into Douglass’s and Lincoln’s sexual lives and proclivities, and especially about what he imagines were their homoerotic tendencies,

for which Wilentz finds no credible evidence. In response to Stauffer’s claim that “there is no reason to suppose that [Lincoln] didn’t also have carnal relations with Joshua Speed,” his roommate in Springfield, Illinois from 1837 to 1841, Wilentz replies, “The trouble is there is no reason to suppose that they did.” When Wilentz calls Stauffer “a student of transgressive self-fashioning and all the rest,” he doesn’t mean it as a compliment. Indeed, “Stauffer’s rehearsal of the old Speed story illustrates the difference between a historian and a professor with an agenda.”

This is bracing, and there is much more like it in The Politicians and the Egalitarians. Many of the stories here do indeed illuminate the theme Wilentz sets out, namely, that the grand passions that have gripped Americans over the years, equality above all, stand little chance of actualization in the absence of capable political leadership able to identify and advance an achievable agenda against staunch opposition. Those who argue otherwise tend to do so at the expense of the historical record. A book by Wilentz called Professors with Agendas on the damage “abstract moralism” does to our understanding of the past would be a delight to read.

As for the theme of The Politicians and the Egalitarians, however, Wilentz is a little too hasty in his characterization of “the driving force in American political history” as “the effort to curb the power of concentrated wealth, whether the power of the slaveholders or the power of industrial plutocrats.” For starters, this is a curiously economic view of the problem of slavery, one very much at odds with Wilentz’s nuanced depiction of the moral and political elements of nineteenth-century abolitionist sentiment and advocacy culminating in the Civil War and the Thirteenth Amendment. In fact, it oddly mirrors the Southern view of abolition as an attempt to take away slaveholders’ property without fair compensation.