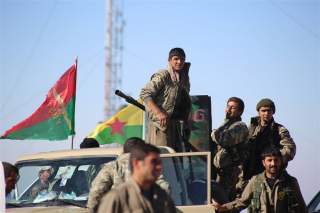 The operation to liberate Sinjar, the town south of the mountain that became famous for being a last resort for tens of thousands of stranded Yazidis fleeing the deprivations of the Islamic State, ended almost as soon as it began. Less than 48 hours after forces from the Kurdish peshmerga, Kurdistan Workers Party and Yazidi self-defense units unleashed a massive offensive to liberate the town from ISIL, international and local journalists were reporting parades of Kurdish fighters in Sinjar’s central districts waving flags and brandishing their rifles in celebration.

The offensive, which was supported by hundreds of U.S. and coalition airstrikes over a month and an additional several dozen during the ground operation, took so many observers by surprise that some believed it was too good to be true. Journalists weren’t the only ones stunned about how quickly the operation succeeded; ISIL militants who administered the town over the previous fifteen months were apparently so shocked that most of them decided to run away rather than resist. “They [ISIL] were shocked that we went into the city that quickly and they barely fought us back,” peshmerga Brigadier Salar Taymour told The Daily Beast. ISIL commanders were reportedly so upset that their men were being pushed back so quickly that they threatened beheading if their foot soldiers refused to fight to the last man.

For the tens of thousands of Yazidis forced into refugee camps in Iraqi Kurdistan, Operation Free Sinjar was about far more than clearing territory from the Islamic State and pushing them into the hinterlands. It was about revenge, a desire to retake their homes and their dignity after being humiliated and severely mistreated by a gang of Islamic State marauders who killed an untold number of them; enslaved the women and children; and surrounded tens of thousands of men, women and children on a barren mountaintop with no food, water or shelter.

The liberation of Sinjar has been placed on the back pages and overtaken by events over the preceding four days—including ISIL’s massive terrorist attack in the heart of Paris last weekend. Sinjar could very well be overwhelmed in the weeks and months ahead if the U.S.-led coalition, and the local Syrians and Iraqis tasked with taking the fight to ISIL, experience more setbacks and reversals. And yet it is important to understand precisely why Operation Free Sinjar was a success in such a short period of time, and what it tells us about the Islamic State on the battlefields of Syria and Iraq.

Unlike counter-ISIL operations in other theaters, the United States Air Force was able to find a group of indigenous, local partners on the ground who were both capable enough to conduct a daring operation and willing to harvest considerable manpower and resources to achieve the objective. According to coalition officials, approximately 7,500 Kurdish fighters were involved in the operation and served as the ground attack force that would supplement U.S. and coalition air strikes on ISIL positions from above. The presence of a small number of U.S. advisers and Special Operations Forces on Mount Sinjar coordinating with peshmerga units in search of how U.S. air power could best be leveraged was an indication that the offensive was well-synchronized. Despite having over a year to solidify their defenses in preparation for a counterattack, the Islamic State was unable to keep ground in Sinjar or even delay the joint Kurdish-coalition operation through the placement of mines, booby-trapped houses and improvised explosive devices.

2. U.S. Air Power Should Get More Credit than It’s Receiving:

The United States possesses the best air force on the entire planet, and the liberation of Sinjar last week exemplifies the stellar ability of American pilots to wander the skies, use the considerable ISR assets available to find and map targets and hit them with precision-guided munitions with minimal risk to civilians. Air power is a force multiplier that ISIL does not itself possess, rendering them vulnerable to persistent attacks without any recourse besides using civilians as human shields.

Before Operation Free Sinjar began, U.S. and coalition aircraft conducted 250 airstrikes in the area, softening ISIL targets from “Daesh fighting positions, command and control facilities, weapon storage facilities, improvised explosive device factories, and staging areas.” If there is anything that has worked for the coalition over the past fifteen months, it is their ability to use their complete dominance in the air in order to destroy Islamic State leadership, buildings, checkpoints, and facilities—both to send a message to ISIL that they will be pursued wherever they operate, but more importantly to deprive the group the kind of freedom they need to move around in the open. Air power in Sinjar served exactly this objective: keeping up the pressure on the Islamic State for a long period time, ensuring that the Kurdish ground assault had the highest probability of success. This strategy, of course, is not exclusive to Sinjar: the U.S. Air Force has conducted hundreds of airstrikes in the vicinity of Ramadi, a city that the Iraqi army and police have prepared to take for several months now. One of the big differences in Sinjar, however, was that the peshmerga were not willing to wait.

3. Sectarianism Wasn’t a Factor in Sinjar:

The swift achievement of the Sinjar operation would not be fully explained if we didn’t mention the inevitable: in contrast to the Iraqi army’s shaping operations in Ramadi or its counteroffensive in Tikrit last spring, the capture of Sinjar proceeded without the usual Sunni-Shia tensions.

Sectarianism is an issue that has delayed counter-ISIL maneuvers in the past and has transformed successful operations into post-conflict trauma and division. In Tikrit, the elimination of ISIL from the area was followed by several days of looting and destruction from the very same Iran-backed Shia militia units that have caused so much consternation and fear among the Sunni community in the past. And in Anbar—a Sunni-dominated province where ISIL has had the time and space to entrench itself—the wide and heated differences between the Iraqi government and the Popular Mobilization Units about which city to take first and which unit should lead the operation have complicated attempts to plan and execute offensives in a unified fashion. The operation in Sinjar had none of these problems. Indeed, despite some disagreements among Kurdish factions about who will take the credit, the YPG, PKK, peshmerga and Yazidi forces all cooperated with each other and communicated their movements when ground operations into the town began. In short, when units collaborate and have a common objective, success comes easier.

If the unprecedented terrorist attack on six locations in Paris last weekend succeeded in giving ISIL the positive media coverage it desires, its failure in Sinjar does exactly the opposite: it exposes just how shaky it can be on the battlefield when coalition and local forces are able to team up effectively. Unlike Ramadi, Fallujah, Mosul or Raqqa, cities that are firmly under the control of the Islamic State, ISIL’s relatively thin presence in Sinjar demonstrates to the world that the movement simply doesn’t have the manpower and resources (even with billions of dollars in seized assets and tens of millions of dollars in monthly oil revenue) to hold all of the cities and towns that they captured in their initial blitz across Iraq and Syria. Reports suggest that ISIL only had several hundred militants in Sinjar prior to the joint coalition-Kurdish operation—a figure that increased to roughly 600 when the organization poured more reinforcements into the city in anticipation of the massive counteroffensive. And yet most of those militants chose to run away rather than confront a 7,500-strong Kurdish force bearing down on them. Sinjar really wasn’t a contest: ISIL retreated without a fight.

What the Sinjar operation does tell us is that a concerted and well-executed plan between coalition and local forces can expose ISIL for what it truly is: a band of apocalyptic, misguided and violent individuals who run away when outmatched and overpowered. That lesson should be applied before any operations are authorized to retake the other major urban areas that ISIL currently holds under its dominion.

The Iraqi army has been preparing for the offensive on Ramadi ever since the city was taken from their grasp in a humiliating defeat last spring. U.S. military officials have not been shy about the need to speed up the operation, so much so that Defense Department spokesmen have openly told reporters that the Iraqis’ slow pace of operations is providing ISIL with a greater opportunity to fortify their defenses and dispatch reinforcements. Yet with Sinjar now in the success column, perhaps the coalition’s initial concerns should be reassessed and perceived as a blessing in disguise: the more time the Iraqi security forces take to launch the operation, the more time the Iraqi government will have to ensure that Sunnis who actually live in the confines of Ramadi are partners on the ground rather than bystanders. Just like the Yazidis who participated in the liberation of Sinjar, getting Sunni tribal forces on board is absolutely essential if Baghdad has any chance in holding the area and defending it from ISIL after clearing operations end. If those Sunni partners are lacking, the Iraqi army will be forced to hold a Sunni-majority city (the same city that they retreated from in May 2015) and expend men and resources that could otherwise be used to clear other ISIL positions in Anbar province.