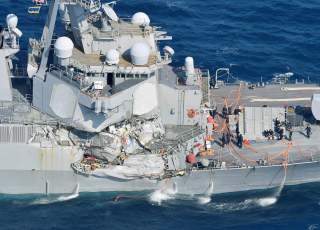 It would be premature to speculate too much about this year’s spate of accidents in the western Pacific and China seas, but the outlook can’t be good. Just ask the U.S. Navy. It was hardly unexpected when the navy leadership relieved the top leadership of the destroyer USS Fitzgerald for cause last June. Indeed, officials vowed to punish the entire watch team following that ship’s collision with a Philippine freighter off Japan. Spokesmen deployed the standard boilerplate language, citing a “loss of confidence” in the capacity of senior USS Fitzgerald officers and enlisted folk to command.

Foreign audiences may lose confidence in the U.S. Navy as well—corroding the U.S. alliance system in Asia and elsewhere around the globe. There are larger repercussions to incidents at sea.

Citing a loss of confidence is standard fare for naval officialdom. Naval chieftains justified dismissing the captain of the cruiser USS Antietam in similar terms last March, after the USS Antietam ran aground in Tokyo Bay. Nor is it uncommon for the navy leadership to ordain a “standdown” following a series of mishaps. I predicted as much early this week in an interview with a South American newspaper—and it was a safe prediction. Whatever command holds a standdown does just that. It stands down from daily routine, dropping everything for an interval of introspection. The point: to determine whether something baked into the system—faulty hardware, errant procedures or tactics, or substandard human training—accounts for a pattern of mishaps.

It’s rare, however, for the navy to censure a fleet commander for troubles at sea. And yet that’s what happened this week after the destroyer USS McCain collided with a merchantman near Singapore, ostensibly after a steering-gear failure. Vice Adm. Joseph Aucoin, commander of the Japan-based U.S. Seventh Fleet, was removed from his post in the aftermath of four high-seas accidents this year. Adm. Scott Swift, commander of the U.S. Pacific Fleet, rightly observes that the collisions came during “the most basic of operations” at sea—namely observing the rules of the road in close quarters with fellow ships on the highway that is the sea. Navy leaders evidently concluded that four accidents in a few months within a single fleet constitutes more than happenstance.

One of the more improbable theories about the USS McCain collision holds that a cyberattack of some type disabled the destroyer’s steering system. Meh. Steering gear is not new technology; nor is it especially complex. The helmsman turns the wheel. The helm mechanism detects the change of angle, transmitting an electrical signal to hydraulic pumps deep in the ship’s bowels. The pumps drive a hydraulic ram connected to the tiller, pushing the rudder to port or starboard to the angle ordered by the bridge team. Not much to hack there. McCain may have suffered a steering casualty of some type, but the “internet of things” has not infiltrated that far into marine engineering. May shipwrights keep it so.

Chances are the blame for recent woes lies with some malign confluence of material and human failings. Reputable commentators point out that the U.S. Navy fleet is overworked. The United States has taken on countless foreign commitments over the years while shedding ships, planes and armaments to save the taxpayers money. In short, the nation is living beyond its naval means. Sleep was in short supply in navy warships even a quarter-century ago, when the fleet was double its current size. The arithmetic is unforgiving: halve the number of hulls and airframes while requiring the fleet to do as much—or more—and you wear out crews and equipment over time.

Generational change is also at work in today’s navy. We oldtimers stood aghast in the early 2000s when the navy in its wisdom decided to shut down training for junior officers—also known as division officers—en route to their first ships. These are officers to whom skippers entrust the operation of vital systems. In yesteryear, division officers spent months at the Surface Warfare Officers School sites in Newport or Coronado, which is where they learned everything from the rudiments of navigation and piloting to the intricacies of engineering and weapons. After the training shutdown, though, division officers were issued a stack of CD-ROMs containing instructional materials, sent to sea, and told to learn it themselves under the tutelage of extraordinarily busy skippers.

No passenger wants to board an airliner flown by a self-taught pilot—but in effect the navy expected newcomers to surface warfare to school themselves on topics of like technical sophistication.

Guess where that generation of officers now stands in the naval hierarchy: they’re ship executive officers—in other words, commanding officers in waiting. It’s doubtful the reports on the USS Fitzgerald or USS McCain disasters will trace human problems back to those officers’ earliest days in uniform. Still, you have to wonder whether bad decisions back then are rippling into naval operations today. The surface force partially reinstated division officer training back in 2008—tacitly conceding the error of its ways, and trying to remedy the problems that resulted. Skimp on training and education now at your future peril.

Now lift your gaze above the minutiae of training and machinery, and even above the human traumas from recent cataclysms. Think about the damage the U.S. Navy’s reputation has endured this year. America’s ability to deter or coerce foreign foes while reassuring friends and allies depends on the U.S. military’s ability to execute its overseas commitments. If the U.S. Navy’s competence falls into disrepute—justly or unjustly—doubt will seep into foreign minds. They may wonder how U.S. forces would fare amid the rigors of combat if they cannot discharge the most basic of peacetime operations.

Allies may question whether the United States can uphold its security pledges, and look elsewhere to protect themselves. Foes may decide to try their luck against a navy in apparent disarray. If doubt prevails, those who need heartening may lose heart while those who need disheartening may take heart. In short, a foreign loss of confidence in the U.S. Navy would be a dismal thing all around. Let’s tend to the wounded and bereft, mend hulls, and revise procedures—and restore the confidence of key audiences in American seafarers’ prowess.

The world is watching—and judging.