What the Next Secretary of State Must Know about Latin America 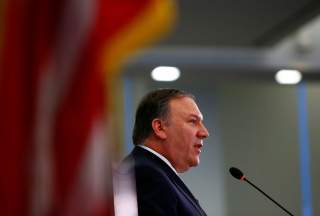 In a well-developed ritual of political transition in Washington, the State Department’s bureaucracy is already mobilizing to “read in” incoming secretary Mike Pompeo on the most pressing issues. Coming from the CIA, the secretary-designate will already have strong views and, after one year in the Trump administration, has undoubtedly developed a clear understanding of the priorities of the president whom he serves. Meanwhile, the department he seeks to lead has been reduced in both scope and stature by the outgoing secretary, and will be hard pressed to re-establish its more traditional diplomatic position.

Internal advocates for the hemispheric agenda will have to make the case for broad and sustained U.S. engagement within these political realities. They can be successful if they focus on a few key priorities within a framework consistent with the administration’s America First approach and the interests of our hemispheric neighbors. It may not be pretty, but it can get the job done.

A first step for those briefing the incoming secretary would be to acknowledge that very real security threats emanate from the region—whether traditional, like drugs and criminal gangs, or nontraditional, from states using cyber tools to meddle in elections to the potential for cross-border pandemics, among others. While not necessarily at the same level as North Korea or Iran, these issues nonetheless require vigilance and resolve to address effectively, and should not be ignored. But they cannot be stopped at our borders alone unless we are willing to seal ourselves hermetically from the rest of the world; we need the willing assistance and true partnership of friendly nations to address these issues effectively. Partnership requires that all parties gain, and that political leaders gain politically by working with the United States. This is the key. To the extent that costs to regional leaders of a close association with the United States go up, cooperation will very likely go down, and U.S. security will suffer.

Cooperation takes many forms, but, as the United States learned hard during the Cold War, narrow cooperation on issues such a law enforcement and security is unsustainable absent a broader agenda of economic development and trade. In fact, it can also backfire badly if such assistance is provided without the benefit of strong, democratic institutions and human-rights protections already in place. Otherwise, the United States, fairly or not, becomes susceptible to allegations of responsibility for the antidemocratic or even repressive nature of partner governments—a talking point that continues to be the default position of those who reject U.S. leadership in regional affairs.

For the new secretary of state, this means several things. The trade agenda, for example, has been Washington’s most powerful tool in the modern era to promote mutual economic and commercial interests across the region, while giving the United States and like-minded nations an effective platform for raising otherwise hyperintrusive issues such as rule of law, the environment and good governance. If the trade agenda retreats, as with TPP, or existing trade agreements such as NAFTA are tarnished, current and potential trade partners will have much less incentive to care what the United States thinks about how they run their respective sovereign nations. Additionally, our own economy, including job creation, will suffer.

Meanwhile, as it has been doing in all emerging markets, China has entered Latin America and the Caribbean with economic force, purchasing huge amounts of primary commodities from the region, investing or loaning many billions of dollars, and asking for nothing in return except implicit support for Chinese economic and political interests. China makes no internal demands on corruption, or democracy, or the environment. The United States may be the preferred partner, but if China is the only partner, regional leaders’ choice—between the one who brings little and demands much, and the one who brings much and demands little—really is no choice at all. What would any of us do under similar circumstances?

The history and legacy of the United States in the region also means that the United States should tread lightly on various security-related matters. We must actively promote and secure our interests as a global power while promoting universal values consistently, but we must also be mindful of the best, most appropriate means to achieve these ends. For example, it is important to stand for democracy where it has retreated, in Venezuela, Bolivia and Nicaragua, but equally in U.S. ally Honduras and elsewhere. As well, a focus on security assistance, particularly in the troubled Northern Triangle region of Central America, potentially raises ghosts of human-rights abuses, and must therefore continue to be carefully conditioned. Improved security is needed, but in the longer term a renewed focus on improving the business climate will help create jobs in the formal economy that will reduce existing temptations for regional youth either to migrate or to join criminal gangs.

Finally, the United States has a meaningful role to play in stemming the humanitarian crisis that has enveloped Venezuela. The incoming secretary is aware of these issues, and has spoken publicly about them. Much of the hemisphere, and much of the rest of the world, recognizes that the crisis is courtesy of Caracas and Havana, not Washington. But other nations have enabled Venezuela’s deterioration, including Russia and China, and Venezuela is directly impacting its neighbors. A strategy for transition and recovery must acknowledge these outside parties. The United Nations may therefore be the appropriate venue to develop such a strategy, led by the incoming secretary’s friend in the administration, Amb. Nikki Haley. In the meantime, the administration can continue to work with close allies in Latin America and Canada to address the burgeoning crisis, while highlighting the illegal activities, including drug trafficking, corruption and human-rights abuses, in which members of the Venezuelan regime are engaged and which undermine neighbors, especially in Central America and the Caribbean.

The upcoming Summit of the Americas in April in Peru provides a near-term opportunity to discuss such priorities. If confirmed in time, the new secretary of state will be in an excellent position to advise the president on ways to lay the groundwork for an effective policy agenda that fits within the current political frame. Administration briefers: there is little time to delay.