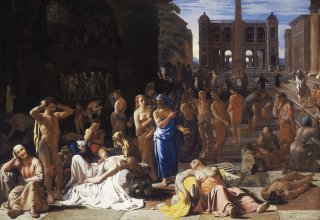 In the summer of 2017, in the last few weeks of Steve Bannon’s tenure at Donald Trump’s side, an otherwise obscure Greek name kept getting trotted out during policy discussions— Thucydides of Athens (c. 460–400 BC). Steve Bannon saw the rivalry between Breitbart and Fox News in 2016 along the lines of the Peloponnesian War (c. 431–405 B.C.), with Fox News as the reigning empire of Athens and Breitbart as Sparta. In more disciplined terms, then-National Security Director H. R. McMaster described Thucydides as an essential military text. Then-Secretary of Defense, retired Gen. James Mattis, saw Thucydides as a warning to democratic societies on how internal division undermines unity in front of enemies.

Why Thucydides? And why Trump’s White House? Between ideologies like Bannon and pragmatists like McMaster and Mattis, there was a shared view that conflict with China was going to define their tenure in power. The rivalry between Athens and Sparta millennia ago wasn’t simply an economic dispute, but an ideological one. A liberal and democratic Athens countered a militaristic and monarchist Sparta. Athens had a strong navy, while Sparta had unquestioned infantry supremacy.

This ideological view of the conflict between China and America is a distant memory as SARS-CoV-2 replicates and burns through the health-care systems across the world. But the coronavirus pandemic gives us a brutal truth—no one on Trump’s team took Thucydides to heart. Athens wasn’t defeated by Sparta alone, it was defeated by a plague that broke out mid-way through the conflict in 430 BC. In Thucydides’ own words:

“The bodies of dying men lay one upon another, and half-dead creatures reeled about the streets and gathered round all the fountains in their longing for water. The sacred places also in which they had quartered themselves were full of corpses of persons that had died there, just as they were; for as the disaster passed all bounds, men, not knowing what was to become of them, became utterly careless of everything, whether sacred or profane.” — Thucydides, The Peloponnesian War

Athen’s naval strategy meant they had walled themselves into the core of their city, packing in a high-density population. Their leader at the time, Pericles (c. 495 - 429 BC) believed that as long as shipping lines remained open, Athens could provision itself for years during a Spartan assault. Instead, the high walls kept the plague circulating in a dense urban population. This decision by Pericles led to the deaths of his sons, his city’s independence, and ultimately his own death. The Spartans, by contrast, suffered little from the plague as they marched across the Peloponnese. The plague was arguably the turning point between a regional dominant Athens and a weakened state.

The key lesson to Thucydides' work isn’t just a lesson in tactics or strategy, but of the largely exogenous factors that can influence the fates of human societies. And in particular, it highlights how asymmetric disease burden can matter more than strategic positioning in conflicts. The classic example is the conquest of Mexico by Cortez, where a salmonella outbreak led to mass death and an opportunity for a small group of Spaniards to eliminate the existing political order. Because the New World had almost no contact with the old, the diseases that circulated around Europe, Asia, and Africa found two immunocompromised continents to wreak havoc on. When Cortez stepped for the first time on North American soil, there were an estimated twenty-two million people living in the Aztec Empire. Within fifty years, after epidemics of smallpox, salmonella, influenza, and other old-world viruses and bacteria swept through it, the population would be less than two million. Asymmetric disease burden changed world history. The Spanish conquest was possible because of the asymmetric disease burden.

Historian William McNeil, in his masterpiece Plagues and Peoples, highlighted how asymmetric disease burden may have contributed to decisive events in world history. He noted that the general pattern of outsider calvary-dominated invaders (Alexander the Great, Attila the Hun, Ghengis Khan, Mehmed the Conquerer), were primarily agrarian/nomadic peoples invading metropolitan cities with higher disease burdens. The overwhelming lesson of history is that dominant geopolitical powers have more to lose during epidemics and are more exposed to asymmetric risks compared to their challengers.

One would hope that with all the talk of Thucydides early in the Trump administration that the administration would have taken the prospect of a pandemic seriously. Perhaps it would have replenished the U.S. strategic stockpile or renewed the contract for ventilator maintenance for those that did exist, which is what led to a number of broken units at a critical time. Perhaps it would have realized that disbanding the global pandemic team or cutting CDC funding would create disastrous problems. Perhaps, even more specifically, it may have chosen not to slash the budget that funded the CDC presence in China on the eve of the outbreak. As China suffered from its coronavirus outbreak in the Hubei province, perhaps the administration could have taken the opportunity to prepare for an eventual spread to America by preparing mass production of much-needed ventilators, N95 masks, and other personal protective equipment. Or, at minimum, perhaps the administration could have prepared for testing. Instead, it spent the better part of two months downplaying the chance of catastrophe as the disease grew exponentially. To date, America has triple the coronavirus caseload and deaths with exponential growth continuing unabated as China begins reopening its economy. Coronavirus, with proper preparation and leadership, would have been a significant challenge. With neither of those things, it is an asymmetric catastrophe. China, emboldened by the asymmetric disease burden, now sees the deadly disease as an opportunity to challenge American dominance.

Perhaps if Trump administration officials had read Thucydides, then America wouldn’t be in the same position as Athens.

Lee Drake is the founder of Decision Tree, LLC, a company focused on AI development for mineral exploration. He has a Ph.D in Anthropology from the University of New Mexico.