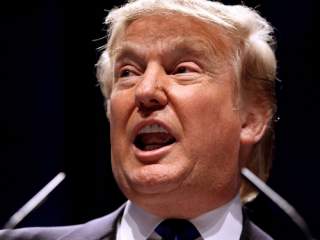 Now that it appears that Donald Trump, after Tuesday’s electoral successes, has an excellent chance of becoming the 2016 Republican nominee for the presidency, the soul-searching has begun as to why the so-called “establishment” had been unable to first anticipate, and then head off, the Trump challenge. In particular, the usual intellectuals, donors and officials are scratching their heads, wondering why slogans about a muscular use of American power around the world did not resonate with the primary electorate this time around.

In part, as a roundtable discussion of the Project for the Study of the 21st Century noted on that very evening, this is due to what might be termed “narrative collapse.” In other words, the old tried and true slogans about “strength” and “global leadership,” requiring American expenditures to maintain the international order, are increasingly disconnected from the lived experiences of voters who believe, rightly or wrongly, that they derive no benefit from those policies. Trump’s message resonates when he describes the cunning leaders of other countries exploiting weak, feckless or corrupt U.S. officials to have the United States assume the burdens (whether collective defense or free trade systems), leaving them to enjoy the benefits at the expense of the American taxpayer. Meanwhile, platitudes offered by pundits and think-tank experts seem disconnected and unconvincing.

Last year, when Derek Reveron, Mac Owens and I examined the “incidental rise” of the United States as a global superpower, a key factor that we identified as to why the U.S. public supported much more robust American engagement with the world, in contrast to the semi-isolationism that had previously dominated public opinion, was that average Americans believed that their security and prosperity were intimately tied up with U.S. efforts to shape the global system and the international order. It certainly helped that the Soviet Union was believed to pose an existential challenge to the United States, helping to overcome traditional aversion to “binding alliances” and shifting the U.S. force posture from a boom-war–bust-peace cycle to a large standing military, deployed throughout a network of global bases.

But just as critically, U.S. aid efforts to other countries, starting with the Marshall Plan, and American plans to cultivate an international system defined by free trade and open lines of communication, were seen as a direct benefit to millions of American farmers, small businessmen and workers, who saw the markets for their goods and services expand. This built up constituencies for a robust U.S. engagement with the world, not only on Wall Street but also on Main Street. Citizens supported and celebrated American global leadership precisely because they believed that position generated real and tangible benefits for average Americans—and that abdicating that position of leadership would risk their prosperity and security.

Today, the U.S. foreign policy community generates plenty of doom and gloom as to why other countries around the world would not wish to see the United States abdicate or pull back from that position—why the rest of the world would miss America. But there has been less focus on making the case why any diminution of the U.S. role in the world (as tragic or risky as it might be for Jordan, Estonia, Vietnam or Colombia) would necessarily jeopardize the interests of average U.S. citizens. Trump’s rise, and to a lesser extent, that of Senator Bernie Sanders, is a direct reflection of this narrative collapse.

After all, other countries have at various points given up on being great powers in order to tend their domestic gardens, with no apparent ill effects to the well-being of their citizens. I think that there is a clear case to be made that U.S. leadership brings clear benefits; our ability to “run deficits without tears” because of the dollar’s status as a global reserve currency is one of the best examples. But in recent years, this case has been muddled, and further hindered by the perceived lack of success of major U.S. ventures (the Iraq War, the Afghanistan mission and the Libya intervention, among others), reinforcing the perception that the United States is losing.

Recreating an enduring strategic narrative that can regain U.S. voters’ confidence is absolutely necessary, and part of this needs to be more to show average Americans how and why they benefit. But it will also require a new level of honesty in terms of conceptualizing where and when the United States takes action in the world. In the immediate post–Cold War era, the United States could afford to be less focused in how it applied its power, and more indiscriminate in where it identified “vital interests,” which eventually came to include more than 150 different countries. The United States also had greater leeway to absorb and rectify mistakes. The environment is changing, not because the United States is in any sort of terminal decline, but because power is becoming more diffused and dispersed, and because America’s margin for cost-free action is diminishing. The United States, in the future, will have to become more selective in where and when it chooses to engage. As Reveron, Owens and I concluded, “A change in the maximalist deployment of U.S. power will not invite a collapse of an international order favorable to U.S. interests.”

Trump’s improbable rise and his ability to defy the “orthodoxies” of presidential campaigns reflect the distrust that “Washington” is not working for the best interests of the American people. Regaining that trust is not going to be a matter of finding a new catchy slogan.