What Trump's Declaration of a National Emergency Means for 2020 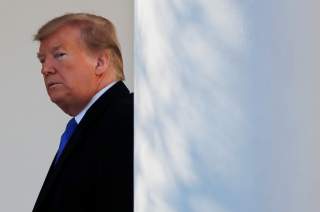 President Trump wanted to declare victory, but you could tell in the Rose Garden Friday that his heart wasn’t in it. He knew the score. “People that should have stepped up did not step up,” Trump said, as he announced he would sign a massive spending bill but use emergency powers to build the border wall Congress wouldn’t fund.

The “real deal” isn’t the paltry border security agreement between Trump and congressional Democrats. It is instead with Republicans like Senate Majority Leader Mitch McConnell: they will back Trump on declaring a national emergency in order to build the wall even though
they would probably prefer otherwise in exchange for the president averting a second government shutdown despite getting little of what he wanted.

It’s a concession to Trump, a way to save face after the art of the deal failed to produce any meaningful wall funding and just $1.375 billion for border security in total. It remains to be seen whether there are enough Republicans who support even this to make the emergency powers gambit viable. Constitutional questions about this end-run around Congress aside, many conservatives are fearful a future Democratic administration will seize such powers to deal with climate change or gun violence—issues liberals certainly regard as
a national emergency.

That might be a stretch. Trump is redirecting how money the government already has will be spent. While that might circumvent and even violate Congress’ constitutional authority over appropriations, it’s very different than coming up with the $42 trillion it would take to pay for the “Green New Deal” or using presidential emergency powers to change gun laws.

Trump’s emergency declaration is questionable. But moving funds for military construction and a Pentagon drug program to the wall is a different animal than claiming these powers to raise trillions in new revenue or waive the Second Amendment. And even this move might not survive judicial scrutiny.

All that raises another problem: if the matter is tied up in the federal courts as Trump anticipates, it will be difficult to deliver on the wall by the 2020 presidential election. Yes, there has been an uptick in illegal entries by families and minors that complicate quick removal and enforcement, necessitating physical barriers. But the wall is Trump’s most visible campaign promise.

The wall failure cuts to the heart of two key reasons for voting for Trump. One is that he is a consummate deal-marker. The other is that he will control immigration better than his recent predecessors from both parties.

Trump has given us reasons to doubt him on both counts. Trump probably could have gotten $25 billion in border security funding from vulnerable red state Democrats in the Senate and a Republican-controlled House last year. On the shutdown related to Deferred Action for Childhood Arrivals, it was the Democrats who caved.

This year, Trump’s leverage is gone. His advisers who wanted to balance a DACA amnesty with some reductions in legal immigration and disincentives for future migrants to bring a whole new generation of Dreamers across the border were right on the merits. Holding out for the enactment of much of the restrictionist agenda, however, might have been too steep an asking price and thus the refusal to take a wall for DACA deal will always be second-guessed.

Trump knows that his options are limited. That’s why he is declaring an emergency and preparing to use liberal judges and Democratic anti-borders rhetoric as campaign issues. And that’s why many establishment Republicans are going to let him. The shutdown strategy was a loser, as usual.

Only one Trump card remains: the president does have some statutory authority to “construct
... fences ... across international boundaries of the United States” based on a bill Barack Obama signed into law that doesn’t rely on emergency powers.

“Critically, the White House stated that ‘these funding sources will be used sequentially and as needed,” writes Josh Blackman in Lawfareblog. “The ‘emergency’ funds may not be tapped till the other, less controversial funds are depleted. Plaintiffs may not have standing to challenge the diversion of ‘emergency’ funds till those funds are in fact allocated.”

So some new border barriers could yet be built. Still, as Trump himself seemed to imply, the whole process probably should have started when Republicans controlled both houses of Congress.