What Trump's Updates to NAFTA Mean for the Internet 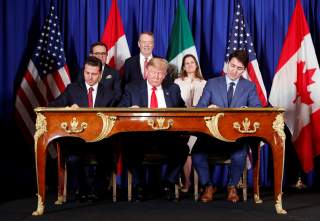 Perhaps the biggest change in the quarter-century since the North American Free Trade Agreement (NAFTA) was signed has been the way the internet has fundamentally reshaped how human beings socialize, share culture and do business. Just like the broad reduction in global tariffs following World War II, the digital revolution has driven economic growth around the world by reducing transaction costs, enabling specialization and expanding markets.

But the internet’s full potential as a catalyst of human progress is threatened by digital industrial policies, data protectionism and other backward-thinking interventions that erect virtual walls around a naturally global network. In order to combat this scourge, the newly negotiated U.S.-Mexico-Canada Agreement (USMCA) updates NAFTA with new rules on digital trade that will be critical to secure free trade and innovation in the twenty-first century. While the USMCA needs significant improvement in some areas, its digital trade provisions set a strong precedent for future trade negotiations.

According to the U.S. Bureau of Economic Analysis, the digital economy accounted for 6.5 percent of U.S. gross domestic product in 2016, contributing $1.3 trillion that year. The McKinsey Global Institute has estimated the internet was responsible for 21 percent of all global economic growth between 2005 and 2009, a period when there were half as many internet users as there are today. Meanwhile, a recent report from the World Trade Organization (WTO) found that in 2016, the value of e-commerce transactions totaled $27.7 trillion, the overwhelming majority of which were business-to-business transactions.

Unfortunately, not everyone is free to experience the full benefits of the internet age, because so many national governments restrict access to online services and websites. Some of those restrictions are meant to censor ideas or reduce foreign influence. Others are driven by a desire to protect privacy or intellectual property rights. A growing number of protectionist restrictions steer the economic gains of online commerce to domestic businesses in pursuit of digital industrial policy.

To counter this trend, the USMCA prohibits a broad range of digital trade restrictions. Under terms of the agreement, governments cannot impose tariffs on digital content or force foreign companies to share software source code. The USMCA also facilitates cross-border online shopping by raising the value threshold for shipments allowed to bypass formal customs paperwork and enter duty-free. The agreement’s most important digital trade provisions enshrine policies essential to the effectiveness and operation of the global internet, such as the free flow of data across borders.

When governments limit cross-border data flows, they effectively build a wall around the internet and force their own citizens to stay behind it. Data localization measures surely benefit some, such as those who own domestic data centers or operate inferior locally-based web services. But just as with any form of protectionism, restricting data flows impedes the growth of downstream jobs and entrepreneurial opportunities while fostering inefficient domestic industries dependent on rent-seeking and government privilege.

The USMCA contains a commitment not to “prohibit or restrict the cross-border transfer of information” unless that restriction is “necessary to achieve a legitimate public policy objective” like privacy protection. Even then, the measure cannot be more restrictive than “necessary to achieve the objective.” The provision is strongly worded and would prevent governments from imposing protectionist restrictions disguised as privacy or security measures.

Another essential policy mandated by the USMCA is liability protection for online intermediaries. It may seem arcane and technical, but liability protection is a core policy of the laissez-faire approach that enabled the digital revolution to occur in the first place. In the United States, laws like the Digital Millennium Copyright Act and Section 230 of the Communications Decency Act prevent website operators from being held liable for the conduct of users on their sites. In many foreign countries, web companies who offer common services like online shopping, video sharing, and even web search are forced to navigate a difficult environment and find they can be held liable for the actions of third parties.

Liability protection also means companies can run websites where users share files, stream videos, review products, post classified ads or do a thousand other things that are part of everyday life on the web, without the constant fear of being sued for defamation or infringement. Together with a strong fair use exception in copyright law, liability protections are a key reason why the world’s most successful and innovative internet companies were built in America.

Securing these protections in other countries through the USMCA and future trade agreements will help American companies provide more services to more people around the world. But the most important reason to spread the permissive American system is to allow for a future in which more entrepreneurs and small businesses, who don’t have compliance departments or lobbying shops, will be able to help develop the next wave of innovative services.

Despite all that, opportunities for progress continue to arise. At the World Economic Forum last month, it was announced that China had finally agreed to join the United States, the European Union and a host of other countries in negotiating new e-commerce rules to liberalize e-commerce within the WTO framework.

With political courage and leadership, the United States remains well-poised to spread the policy of digital free trade as a central part of a strong global trading regime. Updating NAFTA with good provisions on digital trade is a step in the right direction and sets a useful precedent for future negotiations.