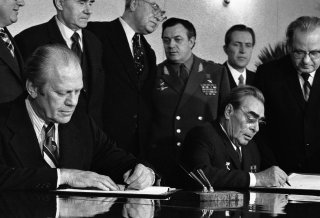 The Biden administration would like to rejoin and revive the Iranian nuclear accord, known as the Joint Comprehensive Plan of Action (JCPOA), which the Obama administration and five other governments (the United Kingdom, France, Germany, Russia, and China) agreed to with Tehran in 2015 but which the Trump administration withdrew the United States from in 2018. After the Trump administration made this move, Iran incrementally stopped complying with the terms of the JCPOA, but Tehran has indicated that it would also like to revive the agreement—if the United States ends the economic sanctions that the Trump administration imposed after its withdrawal. But the Biden administration is not willing to lift them all since many of these U.S. sanctions from the Trump era and before relate less to Washington’s concerns about Iran’s nuclear policy than its regional policies. These include Iranian involvement in Syria, Lebanon, Iraq, and Yemen as well as Tehran’s hostility toward some of America’s closest allies in the Middle East: Israel, Saudi Arabia, the United Arab Emirates (UAE), and Bahrain. The recent onset of Saudi-Iranian talks aimed at easing relations notwithstanding, Iran’s unwillingness to alter its aggressive regional policies has complicated the Biden administration’s efforts to revive the JCPOA. Indeed, critics of Biden’s effort to rejoin the JCPOA see the continuation of Iran’s regional policy as a reason to doubt Tehran’s commitment to abide by a revived nuclear accord, and so oppose the United States rejoining it.

How the Biden administration, Congress, and American policy analysts, in general, think about these questions should be informed about a similar situation that occurred during the 1970s when the United States was pursuing the Strategic Arms Limitation Treaties (SALT) with the Soviet Union at the same time as Moscow and its allies were intervening militarily in the Third World. What happened in this previous situation, in which the pursuit of nuclear arms control was negatively affected by differences over regional policy, could be useful for helping set reasonable expectations for how American policies that did not work then probably will not work now—and so should be eschewed in favor of more productive ones.

Just as the United States has sought to wind down American-led interventions in the Middle East both before and after the signing of the JCPOA, the United States pursued strategic arms control with the Soviet Union beginning in the late 1960s when Washington first began attempting to extricate itself from Indochina. The SALT I treaty was signed in May 1972—less than a year before the U.S. withdrawal from Indochina in March 1973—something that Soviet support for North Vietnam had helped bring about. The involvement of the Soviet Union and its allies in various regional conflicts, though, contributed to doubts in the United States about whether Moscow could be trusted not just with regard to Third World regional conflicts, but its commitment to nuclear arms control. Still, progress on nuclear arms control continued despite Soviet involvement in the 1973 Arab-Israeli War, the 1975 Soviet-backed Cuban intervention in Angola, the 1977-78 Soviet-Cuban intervention in the Horn of Africa, and the 1978 Soviet-backed Vietnamese intervention in Cambodia. Presidents Jimmy Carter and Leonid Brezhnev signed the SALT II treaty in June 1979. But progress on Soviet-American arms control broke down completely when the Soviets invaded Afghanistan in December 1979 and President Carter withdrew the SALT II treaty from Senate consideration in January 1980.

As Raymond Garthoff described in Détente and Confrontation, his monumental 1,206-page account of these events, American and Soviet leaders had very different understandings of what the détente process would lead to. Richard Nixon and Henry Kissinger, as Garthoff recounted, oversold détente, giving rise to American expectations that it would not just involve strategic arms control, but a more cooperative relationship generally, including in the Third World. Thus, when the Soviets and their allies intervened militarily in the Third World, this not only violated the American understanding of what détente was supposed to entail but also increased uneasiness about whether the Soviets could be trusted to honor strategic arms control agreements. Carter’s withdrawal of the SALT II treaty from Senate consideration (where its ratification would undoubtedly have been defeated) was seen by many in the United States as an appropriate reaction not just to the Soviet invasion of Afghanistan, but all the interventions undertaken by the Soviets and their allies during the 1970s.

By contrast, the Soviets (as Garthoff also described) had a very different, and much narrower, understanding of détente. For Moscow, the overall Soviet-American relationship was competitive, but the two sides could cooperate in some areas when doing so was in their joint interests. The prevention of nuclear war through strategic arms control was just such a common interest. Competition, though, would continue in areas where their interests diverged. Indeed, with the U.S. withdrawal from Indochina and subsequent unwillingness to become militarily involved elsewhere in the Third World along with the rise of “progressive” forces throughout in many countries there, Washington could hardly expect Moscow not to press its advantage in areas that the United States was either withdrawing from or not willing to get involved in. Before Afghanistan, continued U.S. pursuit of strategic arms control after its withdrawal from Indochina as well as the military involvement of the USSR and its allies in the Middle East, Africa, and Indochina all pointed to an American acceptance of this logic no matter what the White House and Congress actually said. Thus, Moscow genuinely saw Carter’s withdrawal of the SALT II treaty from Senate consideration as irrational since progress on strategic arms control was in both American and Soviet interests despite the Soviet intervention in Afghanistan. But once the Soviet-American strategic arms control process did break down, Moscow’s immediate reaction was not to end the Third World interventions that upset Washington so much but to continue them.

Similarly, different administrations in Washington, on the one hand, and Tehran, on the other, have had different expectations about what the JCPOA would lead to. President Barack Obama in particular held out hope that progress on the Iranian nuclear accord would lead to a better Iranian-American relationship that would include trade, investment, and cultural and scientific exchanges. President Donald Trump withdrew the United States from the JCPOA not just because he could not believe Iran was abiding by its terms, but because he wanted a “better deal” that included changed Iranian behavior in the region. And as John Bolton related (with disgust) in his memoir about serving as Trump’s national security advisor, Trump also believed that he could make this “better deal” with Iran.

By contrast, Iran’s Supreme Leader Ayatollah Khamenei did not view the JCPOA as a prelude to an Iranian-American rapprochement, but in much narrower terms as an agreement involving a simple trade-off between Iran agreeing to forego nuclear weapons in exchange for the lifting of economic sanctions. While more moderate Iranian leaders such as President Hassan Rouhani and Foreign Minister Javad Zarif may have hoped for a broader Iranian-American rapprochement, Khamenei, the influential Islamic Revolutionary Guards Corps and its expeditionary arm, the Qods Force, were not willing to forego involvement in regional conflicts—especially when they saw the United States as withdrawing from the region both under Obama and Trump. And just like the Soviets after the breakdown of the strategic arms control process, the Iranian reaction to Trump’s withdrawal from the JCPOA in 2018 was not to reduce its involvement in regional conflict but to continue it.

Despite this, there are those in Washington who hold out hope that the United States can link its agreement to rejoining the JCPOA to Iran modifying its behavior toward America’s Middle Eastern allies as well as reducing or even ending its involvement in the region’s conflicts. Their confidence in this possibility may derive in part from earlier experience with the Soviet Union—through this time from its behavior in the latter part of the 1980s and not the 1970s. While Brezhnev may have thought that he could pursue strategic arms control with the United States while intervening militarily along with its Marxist allies in the Third World during the 1970s, by the late 1980s Gorbachev understood that these two policies were in conflict. Mikhail Gorbachev had an ambitious economic reform program for which he saw an overall détente with the West (not just strategic arms control agreements) as being necessary for its success. He also saw the interventions in the Third World being undertaken by Moscow and its allies both as hindering the achievement of détente with the West and as unsuccessful ventures needlessly diverting scarce Soviet resources away from his priorities. And so—much to Washington’s delight—Gorbachev decided to withdraw Soviet forces from Afghanistan and step back from the Third World (as well as Eastern Europe in 1989) in order to pursue what was to him the more important domestic reform effort needed to strengthen the Soviet Union in the long run, which also required détente with the West.