What Vladimir Putin Is Really Thinking 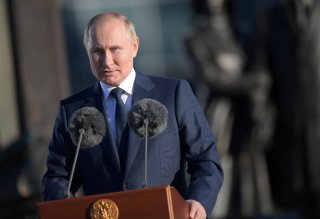 What does Russian president Vladimir Putin want? What is he trying to achieve? And what could go wrong? My thoughts and ideas are based not only on an analysis of Putin’s texts and policies, but also on personal observations of his logic and motives for decisions. He has spoken about them at regular meetings of the President with the editors-in-chief of Russian media outlets. The format of these meetings, as a rule, is closed, but also free in the sense of a frank exchange of opinions. At the very least, I could always ask Putin any questions, ranging from Mikhail Khodorkovsky and Alexei Navalny, to civil liberties and democratic practices. And I always got detailed answers. The most recent meeting took place in St. Petersburg at midnight on June 17. It provided a real window into Putin’s mindset and objectives.

Here is what I have gleaned from these meetings: Two events of the recent past apparently preordained contemporary events in Ukraine. The harsh anti-Russian course of Maidan from 2013 to 2014, with a pronounced Russophobia towards the Russian-speaking population, including in Crimea, left no doubt that Russia would lose its naval base in Sevastopol and access to the waters around Crimea in general. Victoria Nuland not only openly represented, but also symbolized the United States as the main force behind the anti-government protests. Since Maidan was obviously anti-Russian in nature, Washington’s position was perceived as hostile to Moscow. And the fact that the guarantors of the settlement of the situation, represented by the foreign ministers of Germany, France, and Poland, could not guarantee anything was interpreted in Moscow as an attempted direct deception of Putin himself.

Moreover, there is information that, allegedly, President Barack Obama personally called Putin at that time and proposed cooperation. Obama was supposed to direct the protesters away from the Maidan, and Putin was to suggest to Yanukovych that he take armed law enforcement officers to the barracks. New elections of the President of Ukraine are to be held in the fall of 2014. As you know, this did not happen. And Obama never called Putin back. He didn’t even apologize, to say that everything had gone wrong, sorry, old man. He simply never called back and that was the end of it.

What’s more, in Putin’s thinking, it is American society that is split in half. One example is the topic of abortion. And no trace of Russia. It’s time for American politicians to admit that their society is split as never before. For its own internal reasons, not because of Russia. That would be an honest assessment.

But in 2018, based on an investigation purporting “Russian interference,” sanctions were imposed on the Russian energy sector, Russia’s completion of Nord Stream 2 was deemed unacceptable, and a replacement for Russian gas was identified—liquefied natural gas from the United States. At the same time, Congress outlined a new basis for including specific Russian citizens on the sanctions list—who enjoyed close relations with Putin. In other words, it made the president of Russia toxic for his citizens, chief among them the “captains of Russian business.”

Parallel tariff and sanctions pressure on China from 2018 to 2020 led to Russian leadership to the firm conclusion that the United States is using sanctions as an instrument of unfair competition. The problems of Uighurs, Tibetans, and human rights in China as a whole immediately came into focus. It is clear that the placement of such human rights issues on the bilateral agenda is a precursor to and a sign of a new Cold War.

In turn, the Russian National Security Council apparently reached several conclusions: first, globalization, a scenario in which only the West wins, is over; second, sanctions are unfair and the reasoning behind them is far-fetched; thirdly, sanctions will not be lifted soon, perhaps never; fourth, the main object of the West’s attack is Putin himself; fifth, adding people who cooperate with Putin to the sanctions list pushes Russian society to division and revolution. From that moment on, one can assume that an era of total distrust in Russia’s relations with the West has begun.

The person who has had to deal with Russia’s new challenge is Putin and Putin alone. Precisely for this reason, it is important to understand the key traits of Putin’s character in order to understand the logic of his decisions.

Who Is Mr. Putin?

In my view, the answer to this question, asked in Davos back in January 2000, is more or less clear today.

Putin is a Russian, a statesman, a patriot, a Chekist, and someone who appeals to the nation and common people. Each of these characteristics of his personality and the combination of them plays a key role in understanding the decisions he makes.

For a start, Russianness and the religious orthodoxy attached to it predetermine his understanding of responsibility for the life and position of Russians wherever they are today. The collapse of the USSR left 25 million Russians outside the borders of Russia. It is in the name of protecting the life and dignity of these Russians that Putin draws moral rectitude for the internal justification of his actions. In the West’s decision to ignore the problems of Russian speakers in the Baltic states and Ukraine, Putin sees immorality and hypocrisy.

Putin’s experience at the height of power led him to the deepest conviction that the well-being of citizens depends on the personality of the president, not on institutions. To be honest, I have never heard the word “institution” from Putin. Maybe he mentioned it in formal texts, but as a tool for transforming the life of Russia, the category of “institution” is insignificant for Putin.

The principle of democracy is also applied in a particularly Russian way. Democracy to most of us is the power of the majority, as in ancient Athens. Today, Russia does not attach importance to such an important feature of modern democracy as the constitutionally enshrined protection of minority rights, nor the regularity of free elections or the presence of opposition media. Quite the contrary. Finally, a one-man management style does not need a separation of powers. Putin’s decisions are not met with criticism or resistance either in parliament or in the judicial system, including the Constitutional Court. This type of government—with an extremely closed procedure for making the most important strategic decisions--has led to the fact that, taking into account the nuclear status of the country, the subjective ideas in Putin’s head turn into a geopolitical reality for Russia, not to mention the rest of the world. Everyone has to reckon with this.

It is also the case that Putin, like all people in uniform (albeit in civilian clothes), is convinced that it is not the individual who is at the center of Russia’s interests, but the state. Putin’s conception of patriotism has become a new national idea. He is convinced that the country’s main problems can be solved by state corporations, state monopolies, and state banks. And a patriot is a person who puts the idea of state sovereignty above individual human and citizen rights.

Put bluntly, Putin is a Chekist. The basic features of such a security officer are suspicion, opacity, and secrecy. Without these professional traits, a security officer is not fit for purpose. Putin has made these features of his profession and character the basis for interaction with society. Every event is like a special operation. Until the last moment, no one should know anything. Russia’s loss of 320-350 billion dollars in the frozen assets of the Central Bank is a vivid proof of this.

Opacity, as a principle of management and decision-making, has turned out to be incompatible with the era of the internet, gadgets, decentralized information acquisition, and social networks. It is here that the deep conflict between today’s Russian authorities and the Internet generation, security officers, and gadget-obsessed proletarians lies. It precipitated the fundamental changes in the country’s domestic policy after 2012, starting with the third term of Putin’s presidency.

Putin’s high approval rating, among other things, is based on his conception of simplicity and his attempt to understand the thinking of people who are equally simple. Many question the existence of such “ordinary” people. Nevertheless, for the purposes of this article, I mean people whose basic requirements in Maslow’s hierarchy of needs relate to the bottom of the pyramid—food, housing, safety. Putin himself ranked these people as part of the middle class, pointing to those with an income of 17,000 rubles per month ($250-320) as a criterion for belonging to this category.

The considered traits of Putin’s character predetermine his actions, both at home and abroad. There are no surprises.

Putin is convinced that the nation’s strategic interests do not depend on who is in power in Russia today - Tsar Nicholas II, General Secretaries Stalin or Brezhnev, Presidents Gorbachev, Yeltsin or Putin. The national interest of the country is constant: security. NATO’s expansion to the East is an obvious security threat. Putin has been paying attention to this issue for fifteen years in conversations with Western colleagues, but his arguments were ignored.