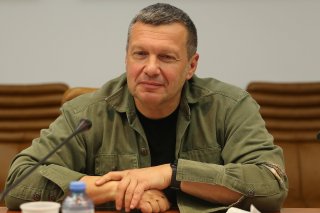 In this interview, TNI Editor Jacob Heilbrunn speaks with the prominent Russian television host Vladimir Soloviev. Soloviev presides over the most popular political show on Russian federal television and also has developed a significant YouTube following. He is well-known in Russia and the West for his outspoken views which appeal to many and offend others. In this interview, Heilbrunn and Soloviev cover a wide range of territory, from the implications of the Stalin era on the present to Russian opposition leader Alexei Navalny, from American sanctions on Russia to the January 6 attack on the U.S. Capitol. It provides a window into a leading Russian figure's views about contemporary politics and history.

Jacob Heilbrunn: In 1995, a prominent Russian author wrote that “The restoration of the Russian empire, in its previous or near previous borders, is only a matter of time. Sooner rather than later, regardless of who will be head of state.” That was of course written by you in your biography of Vladimir Zhirinovsky. The words today look rather prophetic. So do you believe that, in fact, your prediction will become wholly true? Are we looking at a full-fledged restoration of the Russian empire under Vladimir Putin?

Vladimir Soloviev: I’m not sure that it’s somehow connected just to the name Vladimir Putin. It’s much more complicated than that, if you look at the history of our country, you can see that Russia is a very unique type of empire. It’s a breathing empire. We are sort of inhaling and exhaling, where it gets larger and gets smaller. Let’s say in 1917, we almost came to nonexistence, when we became an extremely small part of what used to be the Russian empire. And, our schools, they used to cover this little area that was covered in this red color. And it was called a Russian tree surrounded by an enemy forest. And then it grew up to be a mighty, mighty empire under the Soviet leader Joseph Stalin. It’s more of what a Russian language, Russian culture, Russian way of life, Russian feeling of justice is about. Sooner or later are getting back what we think is ours. Not necessarily by force, but mainly by this idea of unity that does exist in Russian culture and in this very specific Russian subconscious.

JH: And your answer presupposes that there is a special Russian essence?

JH: There has always been one?

VS: There has always been one.

JH: But there have also been the Westernizers under Peter the Great.

JH: So why not open up to the West?

VS: We are extremely open. We couldn’t be more open to the West. Actually, if you have a chance to come to Russia and speak with Russians, we are extremely open. And if we’re talking about educated people, and there are a lot of educated people in Russia, all of them speak at least a couple foreign languages, and they’re well acquainted with foreign culture...the French, British, and American and books. We are extremely open to the West. We are not closed in any sense. Actually vice versa. But we do understand the concept of diversity, it’s not a problem for us to admit that West is West and East is East. Not following Rudyard Kipling, but basically, we do not accept the concept of the burden of the white man. We just don’t think that we have to be colonized. It’s a little bit more complicated. Even Peter the Great was not the Western in the Russian Empire. Yes, he took whatever he could from the West, but at the same time he was an extremely Russian emperor, very Russian. Actually, look at what happens with a lot of people that came into power. As with Catherine the Great. There was definitely zero Russian blood, you could not find even one drop of Russian blood in her, but she became extremely Russian.

It is more of a unique territory that gives a completely different perspective of who you are. Every time Western ideas are coming into Russia, they have this sudden twist, and they become Russian ideas. Even with industrialization, the industrialization of the twenties and thirties in Russia was mainly done with great help of the Americans. There were more than 400,000 Americans working in Russia at the times of awful Stalin. They came to Russia with all modernized principles of industrialization that existed in the United States. And they built a lot of extremely important plants that later were used for the Russian military industry.

VS: So, we accepted every idea we could.

VS: Including Ford Motor Company. You name them, they worked in Russia. But even Marxism is not Russian. We became communist, but those were exactly Western ideas by Marx and Engels. It was hard to admit, but they were not Russians, not by even a single blood. But we gladly took their ideas.

JH: You’ve mentioned Stalin several times. Do you think that there are positive lessons to draw from that era? Because in the West we look upon that era as a disaster.

VS: Well, and how do we look at Franklin D. Roosevelt? You know, four times President of the United States at the time when rights of the black minority did not exist in the sense that we understand them now. So definitely lots of human rights violations. We can talk about concentration camps for American citizens of Japanese origin, we can talk about great hunger and all the awful things during the era of Roosevelt and before him. Should we consider Roosevelt to be as bad as Stalin? So, Stalin is definitely a dictator, definitely a lot of things no one can be proud of. Definitely his hands are in blood of innocent Russians. But the amount of those people that were killed, not tens of millions, some twenty millions, so every historic leader has to be judged by the laws of his time.

JH: Why not tens of millions? That number is widely accepted.

VS: Because that is not true. Because if you look at this, we know exactly how many people were killed. It’s like 900,000, and that is a lot. But if we start exaggerating we lose the historic truth. That’s why it’s one of those things, there are documents, and we have to go with document. If we go to the documents, we will still have awful numbers but not tens and hundreds of millions. It’s still awful, it doesn’t matter, you know, every single innocent person killed is an awful tragedy for the family. But we have to judge them by the laws of this time. And I’m not one to say that Stalin was some great hero of Russia, no, I’m not this kind of person. But I’m just saying that we have to be realistic. At this time it will be extremely difficult to find angels in the world politics. We will see dictators who were ruling in their countries all over the world. Starting with the British. Let me remind you that Winston Churchill was probably personally involved in events in India that killed hundreds of thousands of people. That was his decision, his political decision that led to this famine in India.

JH: But there is a difference between Stalin and Churchill.

VS: Also a difference that we would not consider Indian people as people? Or that we should forget that it was still part of the British Empire?

JH: The difference with Franklin Roosevelt is those were detention camps, not concentration camps. No one was being actively murdered in those camps, and the United States has acknowledged its culpability.

VS: So has Russia.

JH: We can’t reflexively compare these leaders like that.

Don’t try to find saints in this world. Stalin’s criminal activity was quite happily discussed after his death in Russia. That was why he was thrown out of the mausoleum. So it’s not that Stalin is in any way considered to be a hero of Russia. Well, it’s criminal activity that he did. It’s not just camps; he moved entire populations from the places where they lived. It’s not that we’re saying Stalin is our hero. Definitely not. But we’re just saying that we have to admit that Stalin was the person that was in charge during the Second World War. And whether you like it or not, he was the one who created the new world with Churchill and Roosevelt. And by Churchill—and by Roosevelt—he was considered to be a legitimate political leader with whom they sat down and signed all necessary agreements. In their remarks, and in the letters, and in their memoirs, they have a very high opinion of him. Basically, extremely complimentary. It’s a different world. It’s easy to judge the world sitting in the twenty-firsty century. To be exact, Stalin is not my hero.