Putin Is Not Bluffing about Confronting the West 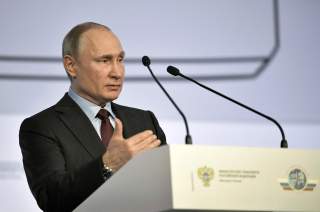 Members of my generation who lived in the Soviet Union remember very well the state of shock created by President Ronald Reagan’s announcement of his Star Wars program on national television in March 1983. It seemed as though the threat of a technological gap between the U.S. and the U.S.S.R. was becoming a reality; in the future, Soviet intercontinental nuclear missiles would be rendered useless as new American missile defense systems developed the potential to wipe them out even at the launch stage.

Under the old Communist Party of the Soviet Union (CPSU), the Soviet system had many burdens that it was not able to meet, from the lack of soap and toilet paper in stores to stagnation in the Soviet economic and political systems. The need to modernize the Soviet social system to withstand competition from the West and, above all, the United States, was obvious to everyone. But Reagan’s Strategic Defense Initiative (SDI) became the strongest catalytic agent for the intricate and impassioned reforms that began in Gorbachev’s perestroika era, which ended with the disintegration of the nuclear superpower.

At the time, everyone in the U.S.S.R thought that the successful implementation of the SDI program was an existential threat to the survival of the country and that it was imperative to do something to counter it.

I don’t mean to say that Russian president Vladimir Putin had an analogous effect on the American government or the majority of the general population with his speech on Russia’s achievements in the sphere of strategic nuclear forces. But I do think it is abundantly clear that Putin showed samples of real operational weapons and that if they fly, hit, and explode, then his announcement has a different character. This demonstration of the technological gap between Russia and the United States is clearly in Russia’s favor. This raises an obvious question among both politicians and analysts: why has Putin revealed all this now?

In my opinion, the answer is apparent. Over the past few years, the United States, leading the West, has consistently expressed dissatisfaction with Russia’s behavior both at home and in the international arena. The consolidation of power, the strengthening of state institutions, the restoration of the country’s sovereignty and Russia’s return as a real subject in international relations have caused strong discontent among our partners in the West. This is perceived as a rebellion against the U.S.-dominated international order established after the disintegration of the U.S.S.R. It is not by chance that the recent Trump administration National Security Strategy, nuclear doctrine, and other strategic documents on international politics identify Russia, along with China, as “revisionist powers” acting against the international order established by the United States after the Soviet collapse.

Both the Russian leadership and serious Russian international affairs experts see the United States adopting a strategy intended to put Russia in its place: to isolate it; to subject it to various sanctions for the purposes of financial and economic damage; to achieve an overwhelming military and technological superiority, especially through the creation of a global missile defense system; to divide the elites and to split elites from the authorities; to provoke discontent among the people; to drive a wedge between Putin and the population; and to bring about regime change and the arrival to power of people who will follow Washington’s will.

But this time American elites have encountered a completely different leader in Russia and, if I may say so, a completely different response. There is a view both in the West and in Russia that Putin’s speech and the show of military power and its qualitative leap in military technology were for domestic consumption and a part of the election campaign. Nothing could be further from reality. It’s obvious that Putin does not need to demonstrate anything like that at home. His demonstration of force was mainly for the United States and the West. It boils down to the following: yes, you are rich, and you have a bigger military budget, but we want you to know, we will not allow you to blackmail us with your military power and threats of a widening gap in the military-technological sphere. This shows that Reagan’s favorite slogan, “peace through strength,” which Trump repeats as a mantra, won’t work under current conditions. It also shows that the language of force and ultimatums won’t work with Russia and that America and the West will have to spend trillions to overcome the technological gap and catch up with Russia in the military-technological sphere.

In addition to displaying military and technological achievements, Putin spoke a lot in the first part of his speech about the need to raise the country’s economy to a qualitatively new level in the next six years. This includes increasing salaries and pensions, reducing poverty, sharply increasing per capita income, and improving the quality of education and medical care. The result of all this will be an increase in average life expectancy to over eighty years.

Many analysts are skeptical about the prospects of achieving all the goals enunciated in the speech. Many Russian liberals and professional oppositionists say that the second part of the speech, on the latest types of weapons, cancels out the chances of fulfilling the first part, which sets out the country’s economic objectives in the coming years. Without going into a long argument with the supporters of this view, I want to note that these people do not even want to understand what was said in the speech. The speech included the following: the essential outlays for new weapons have already been made and weapons of a qualitatively different character either have already been dispersed to the military forces or are on their way. This means that Russia, having provided for itself a qualitative leap in armaments, may temporarily, while others catch up, devote a large part of funds intended for defense to education, medical services, science, and other spheres of the national economy. Finally, the president instructed the government to ensure that economic growth exceeds global average numbers and to implement the tasks set in the speech, which will most likely be embodied in new decrees after his inauguration in May.

Can the current cabinet become a locomotive of economic growth? Alas, past years show that it lacks vision, will, and organizational skills. These goals can be achieved only if Putin himself becomes the prime minister in addition to serving as president, unites the presidential administration and the cabinet into a single “fist,” and, having gathered a new team of young and ambitious government executives, puts his own vast political experience and public reputation to work.