What We Don't Get about Sykes-Picot 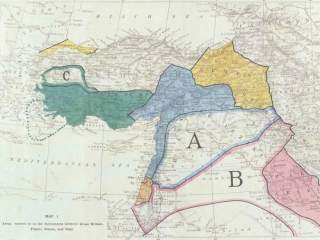 Sykes-Picot is dead, to begin with. There is no doubt whatever about that. The register of its burial was signed by France and Britain after 1919, when each imposed governments in Syria and Lebanon, Iraq and Transjordan. It was signed by the pan-Arab nationalists of the 1940s and ’50s, when their movement crashed against the surprisingly resilient system that had been established; it was invoked again when Arab nationalism crested in the 1960s and fell back in the seventies. It was signed, too, by the minoritarian governments in Iraq, Syria and Lebanon when they violently split ethnic and sectarian divisions in the 1980s, ’90s and beyond. And it was signed most recently by ISIS, which in 2014 tweeted that Islamic State was “smashing Sykes-Picot” in establishing a caliphate in Iraq and Syria. Yes, old Sykes-Picot, which was ratified one hundred years ago this month, is dead as a doornail.

Yet like Marley’s ghost, Sykes-Picot haunts the present. Death and destruction persist in the Middle East. “Think of all the places we are today trying to keep the peace,” Vice President Joseph Biden said in Baghdad in April. “They’re places where, because of history, we’ve drawn artificial lines, creating artificial states made up of totally distinct ethnic, religious, cultural groups and said: ‘Have at it. Live together.’”

Interest in Sykes-Picot on this its centennial isn’t simply about borders, which have changed since 1916; it’s about what the borders ought to contain. The nation-state, which seems to be gaining political legitimacy and strength everywhere else, has failed in the Middle East. This idea isn’t new, of course. It was recognized before America’s recent state-building campaigns in the region. This idea was known, for one, by Ernest Gellner, the twentieth century’s premier thinker on nations and nationalism.

In his posthumously published 1997 book Nationalism, Gellner sketches out the five-stage spread of nationalism from western Europe eastward. First, along Europe’s Atlantic seaboard, states and strong cultures had overlapped for so long that the formation of nation-states and nationalism was early and largely unbloodied by significant rivalries. Paris and London, Madrid and Lisbon, relative to later capitals, had it easy. “To understand the political map of western Europe,” Gellner writes, “it is still more important to know about the dynastic conflicts of the late seventeenth and eighteenth centuries, to know something of Louis XIV’s campaigns, than to be familiar with the ethnographic map of Europe.”

In the second stage, Germany and Italy each already had a strong, unique culture, to which was added a modern state through unification. So far, the story is pretty straightforward. “It is when we move further east that the trouble really starts,” Gellner writes. In central and parts of eastern Europe, Gellner’s third stage, there was a patchwork of cultures, ethnicities and groups, each contesting to be top dog—that is, to join a modern state and strong culture to create a viable nation-state. Increasingly, violence was the instrument employed to settle these contests, and the resulting divisions took on a stronger ethnic dimension. Gellner approvingly cites another scholar, writing that “west of Trieste, nationalism could be benign, but east of Trieste it was likely to be horrible.” He gets around the thorny issue of Hitler and Mussolini by saying that the “horror of Nazism and Fascism is optional. . . . The horror of nationalism to the east is inherent in the situation.”

Here is where the story becomes more pertinent to the Middle East. In the fourth stage, the area in eastern Europe under the Soviet Union, nationalism as a potent political force had been largely suppressed until recently. It has since flooded in among competing ethnicities and groups. Gellner asks of this region,

“Shall we see the proliferation of small, weak, inexperienced and minority-haunted states, or ethnic cleansing, or a diminution of the intensity of the ethnic intrusion in politics? For much of ex-Yugoslavia, the answer is, alas, clear: it is ethnic cleansing, and indeed this is where the term was coined.”

Now, a “Great Sorting Out” is happening in the Middle East, a slow-rolling ethnic cleansing where areas are becoming more homogenous. This mirrors the sorting in the Ottoman regions of eastern Europe over the last few decades (part of Gellner’s fourth stage). Making matters worse, a century (and more) of surprisingly resilient borders, grievances and territorial claims have accumulated in the region, and untangling them promises to be even more bloody than in the Balkans. Finally, a century of distrust in the idea of the Western-style nation-state has accumulated. Why would Middle Easterners turn to such a model of governance now, or turn to it even after a deadly and costly ethnic sorting that could take decades more? Gellner believed, for example, that there was something intrinsic in the culture in the Middle East that made it more resistant to nationalism than in his stages one through four in Europe. This, the Islam-dominated Middle East, was therefore part of a unique fifth stage.

Take Russia, for instance, where modern nationalism was produced from the friction between those elites who wanted to Westernize and those, the Slavophiles, who wanted to boost a local, particular folk culture. Gellner thought that in contrast, in the Islam-dominated fifth stage, the competition has been between those elites who want to Westernize and those elites who appeal not to a folk culture, but rather to a culture focused on the first years and ideals of Islam itself (real or imagined). This latter category includes both true believers (fundamentalists) and those who would simply use such appeals as an instrument of power consolidation. For Gellner, this difference made it more difficult for nationalism, as it had sprung up in Europe, to take root in the Middle East; the appeal was not to something particular and populist but rather to something supposedly universal, undifferentiating of locals. The extent to which this is true can be fought over; indeed, just that is happening, in a way, in the different people and groups fighting in the Middle East for self, home, sect, state and/or whatever else—now and most likely into the future.

Is there a chance to escape this violent fate? For Nicolas Pelham, Middle East correspondent for the Economist, there is. In his new book Holy Lands: Reviving Pluralism in the Middle East, Pelham sees the future in the past. He advocates reviving an Ottoman-esque “milletocracy” in which there are parallel states in a shared space—said another way, no fixed national borders. Pelham writes,

“From the outset, Ottoman sultans had administered their diverse empire on sectarian lines, devolving authority to the leaders of their multiple faith communities, or millets. Patriarchs, chief rabbis, and Muslim clerics headed semi-autonomous theocracies that applied religious laws. But while the millets governed their respective co-religionists, they had no power over land. The empire’s many millets shared the same towns and villages with other millets. There were no ghettoes or confessional enclaves. Territorially, the powers of their respective leaders overlapped.”

Think of it as a Middle Eastern Schengen Agreement on steroids. Pelham sees glimpses of such a plan in present day Baghdad and Najaf. “By decoupling the rule of the sect from the rule of land,” he writes, “the region’s bloodied millets might find an exit strategy from secticide and restore their tarnished universalism.”

It’s a preposterous-sounding plan, one as fanciful as his next point is dead-on fact: nothing else since Sykes-Picot has worked. He writes,

“The history of the past century is in many ways a history of ever contracting horizons, ever more fortified border controls, and ever tighter permit regimes, as governments bent on exclusive control erect their defenses around the territorial patches in which they constitute the majority or have absolute power. While Europe dissolved its borders, the Middle East crisscrossed its once open expanse with ever more insurmountable barriers.”

One hundred years on from Sykes-Picot, it might just be a fanciful plan worth taking a second look at.