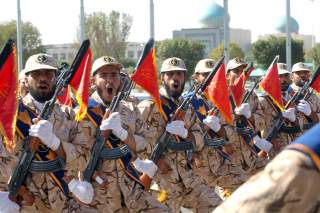 It was an unseasonably warm morning, in northwestern Iran, although a fresh snow blanketed the mountains. Civil unrest had persisted in the area for years amidst the backdrop of war and regional unrest. Crowds gathered in the Mahabad town square. They did not have to wait long. Qazi Muhammad, the founder of the Kurdistan Democratic Party of Iran, ascended a platform and delivered a fifteen-minute speech declaring the Kurds a people apart and sharing the right to self-determination with other nations. When he concluded, 300 supporters each fired five rounds into the air to mark the occasion. On that day, the Iranian central government was nowhere to be seen. Its problems were vast, and its army was riven by defection. At any rate, the Iranian leadership was far more concerned about preserving security and stability in Tehran and defending against external threats than sending its forces to restore order in the countryside.

The anecdote above, of course, refers to the January 22, 1946 declaration of the Mahabad Republic, an entity that continued for nearly a year before the Iranian Army was able to restore Tehran’s control over the region. But, in Iran’s recent history, it is a story that repeated a half dozen times in the twentieth century. And, such separatist outbursts and insurgencies are a scenario that will likely repeat in the aftermath of Supreme Leader Ali Khamenei’s eventual demise.

A History of Unrest:

But back to the history: In the first decade of the twentieth century, Edward Granville Browne, a British scholar of the Middle East and freelance correspondent for British newspapers, chronicled the uprisings against the Iranian monarchy’s autocratic excesses in The Persian Revolution. In that episode, Tabriz—at the time, Iran’s second largest city—became the epicenter for the revolutionary movement. The shah in Tehran effectively lost control over the city and unsuccessfully sought to starve it into submission.

Then, in 1920, after five years of intermittent insurgency that was born of widespread dissatisfaction with Iran’s still corrupt, dictatorial and arbitrary leadership, for example, Mirza Kuchek Khan declared the Soviet Republic of Gilan along the Western portion of Iran’s Caspian coast.

Four years later—and one year before the ultimate collapse of the Qajar dynasty—it was Khuzistan, a predominantly Arab province inside Iran, which became the scene of separatist rebellion against the central state. Sheikh Khazal of Muhammarah—a city known today as Khorramshahr—rose up in defiance of the Iranian monarchy. His rebellion lasted two months before the Iranian state could put it down. Khazal’s grandson today lives in the United Arab Emirates and remains committed to his grandfather’s goals and legacy.

Against the backdrop of the chaos of World War II and its aftermath, not only the Kurds rose up, but so too did some Iranian Azerbaijanis (who, like the Kurds, received Soviet support). At the time of the Islamic Revolution, the Kurds again rose up against the central government; that low-key rebellion was put down brutally. Iran’s southeastern Baluchistan region, too, has been the scene not only of a low-level insurgency for decades, but also rampant criminality brought on by the Afghan drug trade. That the Islamic Republic discriminates against the native Baluch not only in terms of their ethnicity but also because they are Sunni in a sectarian Shia state adds fuel to the fire. So too does Baluchistan’s brief flirtation with independence.

Simply put, in Iran, the past is prologue. When the state is weak or governments collapse, restive minorities along the periphery rebel. There are ample signs that Iranian security forces are beginning to lose their grip. Not only do the economic protests which began nearly a year ago continue sporadically, but in recent months, terrorists and insurgents have grown increasingly bold along Iran’s periphery.

Consider Ahvaz, the largest city in the oil-rich Khuzistan province, and Iran’s eighth-largest city overall. On September 22, 2018, gunmen attacked a military parade, killing twenty-five. It was the deadliest attack inside Iran since terrorists a Shia procession in the southern city of Chabahar in 2010, killing more than thirty. The subsequent Iranian investigation blamed a cell of forty terrorists, twenty-two of whom have reportedly already been executed. Iranian authorities might pat themselves for quick justice, but they might instead consider how it was that such a large cell could operate undetected for so long and how multiple gunmen could infiltrate a high-security area and kill so effectively. While some killed at the parade were innocent bystanders, if the soldiers and Revolutionary Guardsmen slaughtered were unarmed, then that would indicate how little trust Iran’s regime has in the loyalty of its forces.

Less than a month later, Iranian security forces suffered another devastating attack at the Mirjaveh border post, the main border crossing between Iran and Pakistan. In that attack, insurgents or terrorists somehow surprised and kidnapped a dozen Iranian servicemen inside an Iranian base. On November 22, 2018, Pakistani forces returned five of the hostages, but the fate of the others remains unknown. The Iranian investigation suggests that the attack on the Mirjaveh post was, in part, an inside job. Clearly, security around the periphery of Iran is beginning to fray.

Meanwhile, Iranian Kurdistan remains the site of continued insurgency and unrest. This summer, ten Revolutionary Guardsmen succumbed in a single attack. Clashes in the region are frequent, and only regime repression keeps the region from outright rebellion. That the Iranian government has been forced to report on such incidents rather than bury them is a testament to the fact that the challenge can no longer be denied, even in Tehran.

Those new to Iran policy who look at its demography and see its sheer ethnic diversity often propose playing “the ethnic card” to support some of these separatist movements. This would be a huge mistake. The sense of Iran as a nation predates the notion of states organized around ethnicity. When, in the past, foreigners have sought to incite ethnic unrest, they only caused Iranians of all types to rally around the flag, no matter how odious the government. Iraqi president Saddam Hussein’s 1980 invasion of Iran probably saved the Islamic Revolution which was already starting to spin out of control. Fortunately—and despite Iranian propaganda to the contrary—neither the United States nor any other power has supported separatist movements in Iran in the post-revolutionary-era.

But, as Iranian supreme leader Ali Khamenei’s health waivers and he approaches his final months or years, the central government’s control over the periphery appears increasingly weak. The vacuum which will follow his death will likely mean a number of simultaneous and indigenous uprisings. And, while the Islamic Revolutionary Guard Corps (IRGC) will remain on paper a formidable force, with the regime’s leadership vacant and its commander-in-chief functions absent, it will likely be faced with simultaneous indigenous uprisings and insurgencies in Khuzistan, Kurdistan and Baluchistan. It is unclear, however, how effective the IRGC could be.

The U.S. intelligence community has two major blind spots with regard to the IRGC. The first is its factional divisions. While all acknowledge the IRGC is not homogenous—some men only join for the privileges—there is little understanding about who or how many within the organization represent the true ideologues. The second concerns individual units. In 2007, Mohammad Ali Jafari, the current head of the IRGC, reorganized the Guards to put a single unit in each province (and two in Tehran) with the aim of keeping order. It is unknown, however, whether each provincial IRGC unit is composed of men native to the province in which they serve. The answer to that question would indicate whether ideology trumps loyalty when servicemen are given the order to fire into a crowd which might include family, friends or schoolmates. When Khamenei dies, it is likely that those whose hearts are not in the regime’s revolutionary ideology will just go home, moves which will only further encourage Kurdish, Baluchi and, perhaps, Arab insurgency. Even if the IRGC remains largely loyal, its hands will be full securing Iran’s major cities—Tehran, Mashhad, Isfahan and Tabriz—as well as Iran’s oil infrastructure. Insurgents and local councils will fill the vacuum. Some may declare independence; others will likely cloak their movements in talk of federalism.

In the 1920s, mid-1940s and at the time of the Islamic Revolution, it took the Iranian regime months and, in some cases, years to restore order to the periphery. And it took officers willing to shed previous constraints and precedents to pacify the countryside. It was Reza Khan, a Cossack officer, for example, whose success putting down rebellions catapulted him first into a military hero and then, in 1925, the shah. Unclear is whether any Iranian leader in lies in wait among the middle-ranks of the Iranian Army or IRGC or, if not, what the response in Tehran, the region and the broader world would be to state collapse and fracturing. If history is any guide, the world may not have to wait too long to find out.