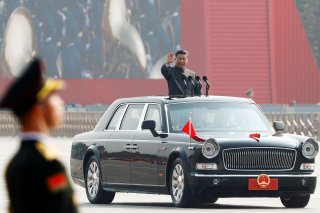 The Reductio ad Hitlerum is the distinctive twenty-first-century addition to Aristotle's classic list of thirteen logical fallacies.  It occurs when an argument becomes so heated that one party compares the positions of the other to those of Nazi Germany. Adolf Hitler and the Nazis were so evidently evil that anything associated with them must be bad. So if you want to argue against vegetarianism, just point out that Hitler was a vegetarian. Q.E.D.

In domestic politics, Trump-Hitler comparisons have become so routine that they have lost their shock value: the one saving grace of the personal Reductio ad Hitlerum is that it often says more about its wielder than about its intended victim. International relations scholars, perhaps more knowledgeable about the historical Hitler and his murderous regime, thankfully seem less ready to invoke him to settle petty scores.

And yet, there has now arisen a powerful, totalitarian party-state at the heart of the global economy that seems intent on repressing ethnic minorities and challenging international borders. It alternatively bribes and bullies its weaker neighbors in an attempt to establish an extensive sphere of exclusive influence. Its not-so-charismatic leader has established a cult of personality straight out of the twentieth-century dictator handbook. And it is arming like crazy.

That country is, of course, China. The parallels between 1930s Germany and 2010s China are profound. The free world's failure to contain the Nazi evil in Germany led directly to World War II and the Holocaust. China may not be plotting a third world war, but the need to contain its evil is no less profound. Just as no one in 1938 could know for certain just how bad things would get over the next seven years, no one today can know for certain what is coming from China. Our goal should be not to find out.

That China is a totalitarian state on the 1930s model should no longer be a matter for debate. The governing Communist Party of China (CPC) posts powerful commissars in all major institutions, from corporations to universities to labor unions. Independent religious institutions are prohibited, and non-sanctioned religious groups are severely oppressed. The Chinese government monitors all -- literally all -- electronic communication. Communications providers cooperate in real-time government censorship. Encryption is illegal.

Genocide is a loaded term, but whatever term is used to describe China's repression of Tibetan and Uighur people, it is eerily similar to 1930s Germany's repression of Jews. There are no known death camps in today's China; nor were there death camps in 1938 Germany. But there were forced labor camps in 1938 Germany that foreshadow those in today's China. And China's emerging rhetoric of ethnic solidarity and Han supremacy calls to mind the ethnonationalism of Nazi Germany.

The ethnic parallels run even deeper, as Beijing increasingly claims to speak for all people of Chinese descent, whether in Taiwan (with which China demands an Anschluss), the Southeast Asian diaspora (analogous to the German-speaking minorities of Eastern Europe), and the English-speaking countries (similar to Hitler's unheeded appeals to German-Americans).

Hong Kong might be likened to China's Danzig, the South China Sea disputes to Germany's creeping occupation and militarization of the Rhineland, the Saar, and the Sudetenland. China maintains and has recently begun pressing irredentist claims to portions of India, Bhutan, and Japan. Like 1930s Germany, today's China makes extensive use of "salami slicing" and other "just short of war" tactics to pressure its neighbors into making concessions.

And then there's the military buildup. Having mostly completed a thorough modernization of its ground forces, the People's Liberation Army (PLA) is now focusing on its air force and navy. The PLA Air Force is desperately working to fully develop its fleet of J-20 stealth fighters, and the PLA Navy has outsized ambitions to build and sail multiple aircraft carrier strike groups. All of this is being undertaken by a country that faces no hostile neighbors and has few out-of-area defense responsibilities.

The time for mincing words is over: China has become a threat to world peace. Ten years ago it was still reasonable to hope for reform. Five years ago it was still possible to argue that greater engagement might help moderate Beijing's behavior. But after Xi Jinping changed China's constitution in 2018 to remove term limits, further centralize power, and enshrine "Xi Jinping Thought" in the very preamble, it became clear that things were going to get worse before they got better. Many Western intellectuals lauded Xi as the anti-Trump in 2017. No one will speak up for him today.

But the new cold war on China can't be won from Washington. The world seems to want the United States to waive its fairy wand and neutralize Chinese aggression without disrupting global trade and investment flows -- or even causing ripples at United Nations agencies like the World Health Organization. That's just not possible. The United States can't rid the South China Sea of over-aggressive Chinese fishing boats any more than it could have saved Poland from German aggression in 1939.

The first countries to stand up to China must be its neighbors. That's the real lesson of 1939. At the beginning of World War Two, natural Western allies like Belgium, Denmark, Norway, and the Netherlands all declared their neutrality in the vain hope of avoiding Nazi aggression. Other Western neutrals like Switzerland and Sweden even cooperated with the Nazi war effort to save their own skins. Had they all stood solidly with Britain and France, it is unlikely that Germany would ever have been able to make much headway in Western Europe.

The littoral countries of the South China Sea should learn that lesson. Were they to take a strong common stand against Chinese expansionism, they could meaningfully leverage America's commitment to freedom of navigation. But they can't reasonably expect the United States to throw its full weight behind their interests when they won't commit their own resources to resisting China. There is no room for neutrality in the South China Sea.

Nor is there much room for neutrality when it comes to technology. China has militarized the internet to serve its own interests. Many European countries have pushed back hard against American warnings not to embed Chinese technologies into their digital infrastructure, despite the fact that two of the main alternatives promoted by the United States (Nokia and Ericsson) are themselves European. The fact that America's closest ally, the United Kingdom, initially embraced Huawei for its 5G network development is an alarming sign that the world simply isn't taking the China threat seriously enough.

In June, the European Union's foreign affairs and security policy representative Josep Borrell said "I don't think that China is playing a role that can threaten the world peace" and repeated Chinese assurances that "they don't have military ambitions and they don't want to use the force to participate in military conflicts." Of course, China poses no direct military threat to Europe. But that shouldn't let Europeans off the hook.

Eighty years ago, many Europeans felt that it was America's responsibility to liberate them from totalitarian militarism, despite the fact that Nazi Germany posed no direct military threat to the United States. Similarly, throughout the cold war the United States shielded Western Europe from the Soviet Union, again despite the US and USSR having no obvious quarrel of their own. Today, Europeans must take China's threat to world peace much more seriously than they do. No one is asking European navies to conduct freedom of navigation operations in the South China Sea, but European diplomatic and commercial support for American positions vis-à-vis China should be much more forthcoming.

Even Russia should be warier of China's military modernization. China relies on Russia for some of its most advanced jet engine and missile technologies. While Russia may have an interest in opposing American policies in Eastern Europe and the Middle East, Russia has no interest in seeing China become the absolutely dominant military power in Eurasia. Selling China oil is one thing. Selling it weapons technology is something else entirely. Russia owes it to itself to be more circumspect about its cooperation with China.

It's past time for the world to start treating China for what it is, and what it claims to be even in its own foreign policy doctrines: an expansive state bent on modernizing its military and seizing what it considers to be its "rightful" place in the world. It is China that lays claim to Taiwan, most of the South China Sea, Japan's Senkaku Islands, and large swathes of northern India, and China that routinely touts its military preparations to press home those claims. Its military ambitions are not hidden in some obscure intelligence report. They are routinely reported in the CPC's in-house mouthpiece, the Global Times.

The melodrama of Nazi comparisons justly discourages serious foreign policy analysts from making use of them. Yet China has reached the "1938" point of comparison on both internal and external metrics. To stop 1938 becoming 1939, the world has to learn the lessons of 1939. The way to prevent World War Three is not to accede China's ever-growing demands. It's for the world to take a principled stand against totalitarianism and militarism. Even in Russia's case, a self-interested stand would be enough. But either way, a stand must be taken, and now. Tomorrow may be too late.