What Would Taiwan Do If China Invaded? 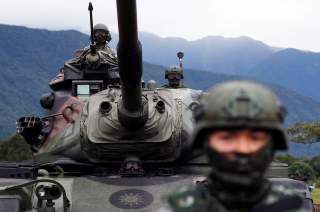 “The American people have come to the aid of foreign countries in the name of freedom many times in our history; but Americans will not in good conscience support countries that are unwilling to defend themselves.” The former U.S. representative from Connecticut and retired Army Col. Rob Simmons made the statement back in 2005 while Taiwan’s Legislative Yuan stalled in funding critical defense acquisitions necessary for the country’s defense. The defense budget was held up largely due to partisan wrangling in the fledgling democracy and the protracted delay were raising serious doubts in Washington about Taiwan’s commitment to its own defense. While the former congressman’s statement was made more than a decade ago, it touched upon a fundamental issue in U.S.-Taiwan relations that remains relevant today: Would the United States come to the defense of Taiwan if it was invaded by China?

The answer to this question is not a simple yes or no, and since the abrogation of the Mutual Defense treaty between the United States and Taiwan in 1979, which provided that if one country came under attack, the other would aid and provide military support, the official U.S. response has been an ambiguous maybe. Exploiting this ambiguity, China has preyed on the insecurity of the Taiwanese people through coercion and psychological warfare—with the aim to create a fait accompli and the subordination of Taiwan under the People’s Republic of China (PRC). In the decades that have passed since the treaty’s termination, China continues to refuse renouncing the use of force against Taiwan, all the while the island transformed from an authoritarian system of government to a vibrant democracy.

After 1979, the closest that the United States came to committing to coming to Taiwan’s aid was in 2001—after Taiwan experienced its first transfer of political power—when President George W. Bush famously stated, when asked if the United States had an obligation to defend Taiwan if it was attacked by China, “Yes, we do, and the Chinese must understand that. Yes, I would.” The interviewer followed up, “With the full force of American military?” President Bush said, “Whatever it took to help Taiwan defend theirself.”

Setting aside the implications of the forty-third president’s clarification of policy, the clarity imbued by President Bush’s interpretation of this American obligation, supported by the Taiwan Relations Act, raised questions of whether this new democracy and its people—whose freedom American soldiers may one day have to fight and die for—are ready and willing to defend themselves against the looming threat that it faced from its authoritarian neighbor? The legal and moral obligations notwithstanding—two additional factors are germane to this assessment of Taiwan’s threat perception: defense budget and the people’s will to fight.

… it is not clear how high a price Taiwan is willing to pay to oppose China. Taiwan’s people have generally resisted the sacrifices that go with a high degree of military readiness. Mandatory military service for young men is unpopular, and the government has already cut the length of service several times. Some high-ranking Taiwan military officers admit that the civilian population’s willingness to fight is not beyond question. Opinion polls commonly indicate that a significant proportion of Taiwan’s trained reservists would be reluctant to answer the call to arms in the event of a war with China.

While anecdotal evidence may have supported the troubling perception that the civilian population of Taiwan would be unwilling to defend themselves against a PRC invasion, a review of publicly available polling data over time have shown quite the contrary: in fact, a high percentage of people in Taiwan are willing to fight if China invaded, and the will to fight now is even stronger than perhaps ever before, especially among Taiwan’s youth.

Contrary to Beijing’s belief and some concerns in Washington of Taiwan’s internal weaknesses, of which a questionable will to fight was one, polling data indicate that a majority in Taiwan will fight if China invaded. To be sure, Taiwan faces other challenges to its defense such as the budget, readiness and manpower requirements, among others, but as more people on Taiwan value democracy, the will to fight to preserve that democracy is not one of them. Indeed, the people’s willingness to fight coupled with society’s overwhelming preference for the status quo bodes well to the psychological resiliency of Taiwan. This should be seen as a reassuring signal for Washington and the American people.