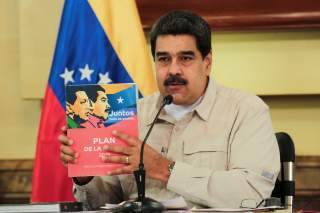 “The current Venezuela has been kidnapped by enemies of the West,” says Jorge Jraissati, a Venezuelan activist who fled the crisis-engulfed country to come to America. He’s now a student at Florida Atlantic University, but continues to advocate for free market capitalism and individual freedoms in his home country. “I still remember the moment I decided to take action and fight for political change in Venezuela. I was sixteen at the time.” Today, Jorge is twenty-two and still fighting for the brighter future Venezuela deserves by speaking about his experiences to students across America.

Once an oil-rich, prosperous nation, Jorge told me how Venezuela descended into utter chaos after former dictator Hugo Chavez was elected. “Economically, the government has heavily regulated the private sector with currency controls, price caps, and widespread expropriations and nationalizations.”

The country now faces an undeniable humanitarian and political catastrophe. In 2017, each Venezuelan lost an average of twenty-four pounds in weight due to a lack of food and skyrocketing inflation. To purchase basic household items like milk and eggs, Venezuelans must carry around thousands of bolivars—encouraging the continued growth of the nation’s dangerous black market. Indeed, the International Monetary Fund reports that inflation rates in Venezuela are set to top one million in 2018.

Even so, socialist sympathisers of Venezuela continue to falsely portray dictators Hugo Chavez and Nicolas Maduro as “heroes” and champions of the working class. But Western left-wing activists and politicians who support Bolivarian socialism—such as Jeremy Corbyn—only worsen the perilous situation that innocent Venezuelans face while fighting for their country’s freedom.

Left-wing thinkers in the West have effectively ignored the brutal suppression of pro-democracy protests in Venezuela. During demonstrations against the undemocratic power transfer between former President Chavez and current President Maduro in 2014, a government crackdown saw at least dozens of high-profile activists brutally harassed and imprisoned. “Maduro responded by radicalizing [Venezuela’s] repressive system,” Jorge said. “Many students were unrightfully imprisoned by the dictatorship.” Jorge personally knew famed opposition figure Leopoldo Lopez, a key leader involved in the student protests—who is still being kept under house arrest. Other notable prisoners include Francisco Marquez, who was held as a political prisoner for four months. “Imagine hearing the screams of people being beaten…I would actually see beatings as well.”

It’s vital for the situation in Venezuela to improve that people like Jorge “communicate what is happening in Venezuela to the international community.” But the country’s free press is dying—under direct attack from the government. In 2017, journalists reported 498 instances of state-sanctioned harassment.

The soaring numbers of afflicted journalists aren’t shocking when we look at the nature of Venezuela’s ruling party. Jorge explains that Venezuela’s Bolivarian ideology sees all “Western” freedoms, including freedom of expression, as evils. “In a way, [the Venezuelan regime is] not so different from the Soviet Union,” he said.“The political party, the state and the government were basically the same thing.” The government, then, is allowed to either suppress the media without reproach or utilize it as their personal propaganda machine.

For Jorge, the parameters of the crisis in Venezuela are evidently not limited to the tortuous humanitarian disaster. Venezuela will only be free once there is radical and far-reaching change to its very political makeup. In order to achieve this, the choking grip of the socialist government must be dismantled.

A radical reorientation of Venezuelan politics is absolutely necessary, according to Jorge. “Freedom is the key element in all prosperous nations. I believe in economic freedom, political freedom, and social freedom. If we have that, we can build a great nation,” he said. But first, the international community must come to terms with the fact that socialist policies are ravaging Latin America. And we must find a way to root them out.

Tamara Berens lives in the UK and studies at King’s College London. She writes about free speech, Brexit and political activism. You can find her on Twitter @tamaraberens.