What's America's Next Move in Syria? 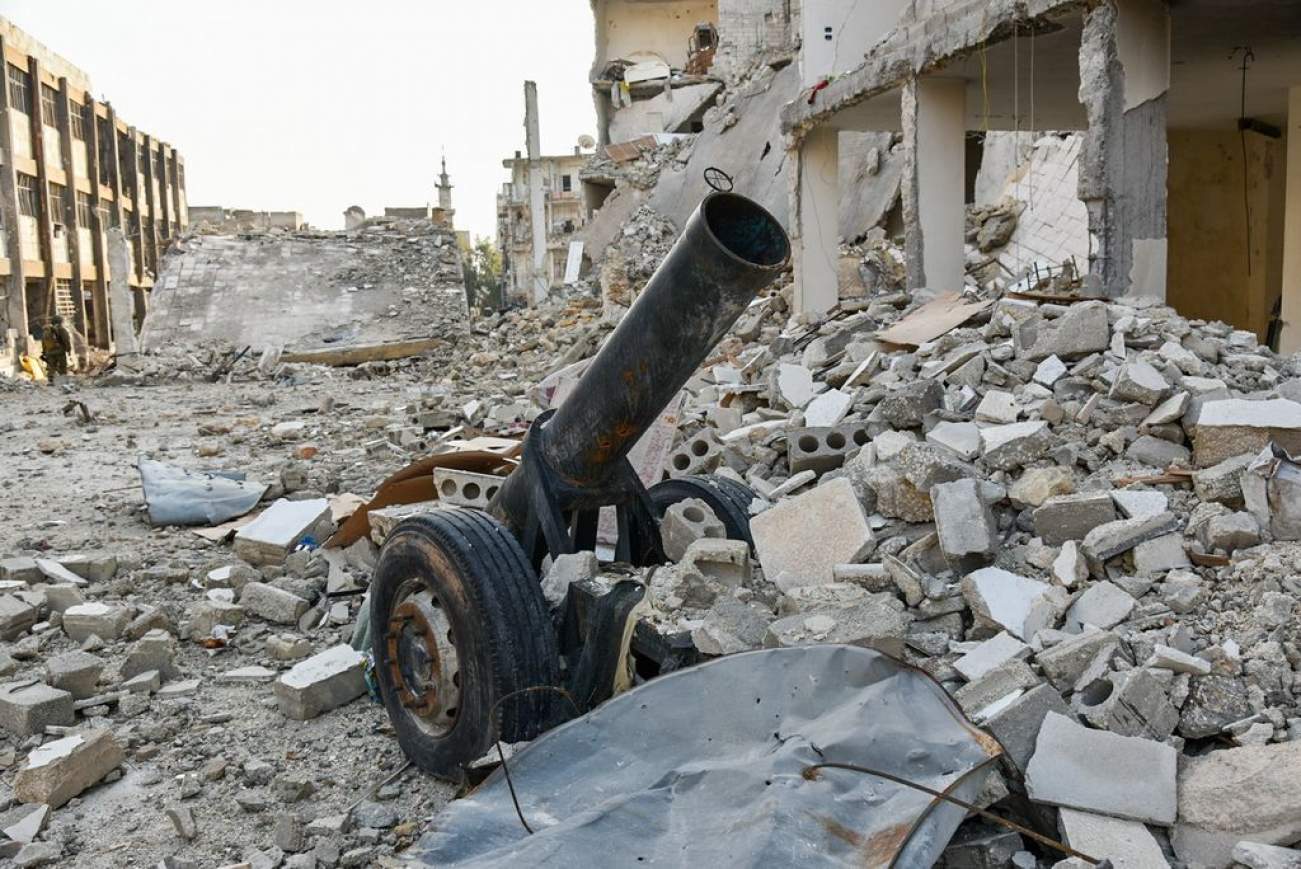 In Syria, the horrors continue to abound.

The Assad regime’s recent use of chemical weapons against civilians in northern Syria demonstrates that the civil war—now in its seventh year—and the atrocities it produces are far from over.

Perhaps more painfully, it shows (again) that the vaunted but hopelessly divided international community lacks the will, interest and capacity to do much about it. Despite the tough words used by both President Trump and UN Ambassador Haley, promising some type of unspecified action, the recent attacks reflect five painful and politically inconvenient realities that underscore the limitations of American power. Here’s why.

The public statements of the president and his UN ambassador have, for all practical purposes, set a new red line on Syria in the wake of Assad’s use of chemical weapons—one that goes well beyond Obama’s rhetoric, reflecting Trump’s desire to project a tougher and more muscular image in defense of American interests. Indeed, the president said that this “heinous” action “crosses many many lines, beyond a red line, many many lines.” Along with Haley’s implicit threat that the United States would take unilateral action if the UN Security Council didn’t act, the administration has inched closer to placing itself in a “put up or shut up” situation. Maybe the president, moved by the grisly images he saw, was only temporarily exercised—the equivalent of one of his extemporaneous tweets—and tomorrow he’ll turn to something else. Moving more aggressively in Syria would seem to contradict not only his previous stated cautionary instincts about deeper U.S. military involvement in Syria’s civil war and nation-building, but also his more general belief that U.S. economic and security interests should trump human rights and moral considerations in American foreign policy.

As with most of the president’s head-spinning statements, it is difficult to know if it is just rhetoric or will actually be translated into policy. Perhaps the tough talk is designed to pressure Russia to refrain from vetoing the resolution that the United States, the UK and France have introduced in the UN Security Council condemning the chemical-weapon attack. It could also be intended to pressure Putin to somehow restrain Assad’s use of these weapons, or to force Assad to liquidate the covert stockpile he has maintained in violation of the 2013 chemical-weapon elimination agreement. But if Putin doesn’t respond positively, the administration may be drifting into some sort of military strike against the Syrian regime. If the administration fails to act, it will be Obamaized; if it does act, one wonders what course of action it will take, and what the purpose of the actions will be given the tough options America faces in Syria.

The consequences of any use of American force against the Syrian regime for U.S. relations with Russia and the campaign against ISIS are very uncertain—whether it is a one-off strike against the facility and aircraft that were used in the chemical-weapon attack, or a larger strike that is not related to the attacks. If the goal is to pressure both the Russians and Assad into a real cease-fire and a political transition in Syria that would ultimately result in Assad’s removal, the administration may be in for a long, hard fight whose outcome is unknown. Indeed, the last thing Trump would want, judged by his statements before this week’s events, would be deeper American military involvement in Syria’s civil war without an end-state or an exit ramp that it can shape, let alone create.

Russia isn’t the only party the administration would have to challenge in Syria. For all the talk of toughening up U.S. policy against Tehran in the region and putting Iran “on notice,” there is little evidence that the Trump administration wants to get into a proxy war with Iran over Syria. The Saudis long pushed the Obama administration to go down this path—and maybe they’ll have more luck with his successor. President Trump yesterday all but threatened Hezbollah and other militias backing Assad. But a combination of factors, including concern over the Russian reaction and the absence of U.S. leverage on the ground—Iran has Revolutionary Guard forces, Hezbollah and other Shia militias on which to rely—doesn’t offer much prospect for success. The president has called on the Saudis to pay for safe zones in Syria. But it’s unclear who’s really serious about this idea. And talk of trying to drive a wedge between Moscow and Tehran remains just that: talk. Competing with Iran in Syria, a fight the United States would certainly lose, also seems to run counter to the administration’s focus on containing and destroying ISIS, even though Iran’s support for Assad remains a powerful recruiting tool for the Sunni jihadis.

Does the United States Have Any Reliable Allies?

Assad has Russia and Iran as his wingmen. Where are America’s friends in the long fight against Assad? It might be reasonable to assume that, with the administration’s courtship of the Sunni Arabs, now would be the time to press them to do more in Syria; after all, the victims of the latest chemical attacks are Sunni Arabs. But one of the more stubborn realities of the Syrian conflict is that America’s Sunni Arab partners—with the exception of small Jordan and vulnerable Lebanon—have talked tough but done little in the way of absorbing refugees or contributing forces to the actual fight against ISIS. Hundreds of thousands of the Sunni Arabs’ religious brethren have been slaughtered or displaced by the Assad regime and its Shia allies, and yet the wealthy Gulf Arabs have contributed a pittance of humanitarian aid to Syria, and Saudi Arabia and the UAE, two of the wealthiest Gulf states, have refused to take in any Syrian refugees.

This is a dismal and embarrassing record. The shift to a post-Raqqa ISIS 2.0 strategy could provide an opportunity for redemption, if the Sunni Arabs can muster the political mettle to seize it. For starters, they could contribute billions of dollars to humanitarian aid for Sunni refugees and to the economic reconstruction of war-torn Syrian communities. Second, in the (unlikely) event that Syria and Russia agree, international efforts to stabilize Sunni areas should include a contribution of Sunni Arab peacekeeping forces under either a UN or an Arab League mandate.

Humanitarian Interventions: Exception, Not the Rule

The Obama and Trump administrations can be hammered for their failure to intervene more aggressively in Syria to stop mass killing. But some perspective is in order, to put the United States’ role in these kinds of circumstances in context. The historical record of U.S. action in these kinds of situations isn’t pretty. From the Armenian genocide and the Nazi Holocaust, to Cambodia, Rwanda, Darfur, Congo and South Sudan, the United States has been risk averse when it comes to humanitarian interventions. Bosnia and Kosovo appear to be rare exceptions. There are many legitimate reasons to explain this hands-off approach, but the pattern is clear: the notion that American values, including the use of armed force to stop evil and mass killing, are also American interests just hasn’t been borne out. Indeed, Syria, far from being the exception, seems to be the norm. And it is doubtful that, in the wake of Afghanistan and Iraq, the American public and Congress would welcome the escalation of U.S. military involvement in another messy war without end in Syria.

The Trump administration confronts the same dilemmas, complexities and contradictions—and the same limitations on U.S. influence—that plagued its predecessor. It stretches credulity to believe that the administration, given all the other preoccupations of the White House and the dysfunction in the foreign-policy decisionmaking process, has developed a coherent political and military strategy to end the war in Syria, and that U.S. military retaliation in response to the latest chemical-weapon attacks is an element of this strategy. A one-off strike is not going to intimidate Putin (or Assad) into abandoning their goals for Syria, while a disproportionate U.S. military response could drag America deeper into the Syrian muck.

If the administration, despite the risks, decides on a military response, it should have good answers to three questions. First, what is the purpose of using force: changing Assad’s behavior on chemical weapons or his regime, or pressing Assad and the Russians into a more serious negotiation on a political transition? Second, if it’s regime change or ending the war, what is the administration’s military and political strategy for the day or, more likely, the decade after? And finally, will the president have the support of Congress and the American people to stay the course, particularly if things go wrong? We can only hope that someone is asking these questions and that the benefits, risks and consequences of the options are given extreme vetting. If the administration doesn’t, big trouble looms.

Aaron David Miller is a vice president and Distinguished Fellow at the Woodrow Wilson International Center for Scholars and author of The End of Greatness: Why America Can't Have (and Doesn't Want) Another Great President. Miller was a Middle East negotiator in Democratic and Republican administrations.