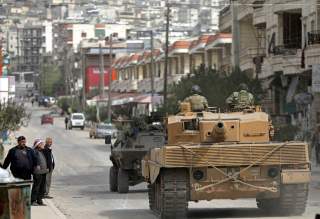 Nature abhors a vacuum, and this is never truer than on the Syrian killing fields.

With the Islamic State’s surviving fighters relegated to small pockets of the most austere bastions of the Syrian desert, the Turkish army likely sees an opportunity to capture Syria’s northern border, in order to project power, consolidate territory and expand its own sphere of influence throughout the near abroad.

Turkey’s latest Syrian military incursion, dubbed “Operation Olive Branch,” was launched in mid-January against the People’s Protection Units (YPG) in the border city of Afrin, one of Syria’s autonomous cantons. Turkey’s objective was to deny the YPG a continuous corridor in the hilly northern Syrian border, where terrorist cadres have traveled back and forth unmolested since the onset of the Syrian Civil War. While the Turkish military and the Turkish-backed Free Syrian Army have advanced considerably to surround Afrin, and entered the city center on March 18,  the fifty-eighth day of the operation, many lives have been lost, including several dozen Turkish soldiers, over a hundred Free Syrian Army members and some three thousand YPG fighters, according to official Turkish statements.

Media observers of Turkey’s incursions argue that the country’s president, Recep Tayyip Erdoğan, aims to mobilize his base at home with a “glorious little war” and to boost his cachet among surviving jihadist groups in the Middle East by directly countering the YPG, while indirectly challenging the United States by portraying himself as a leader willing to stand up to Washington.

For years, Erdoğan and Turkey’s National Intelligence Organization (MIT) have expressed tacit support for Sunni groups, including some of their more extreme elements, in an attempt to isolate the Marxist-friendly YPG in Syria. The logic is simple: Turkey seeks to dominate northern Syria by using its local Syrian Sunni populations, even radical ones, as proxies.

Is such a plan viable? It is for Erdoğan.

There are 3.5 million Syrian refugees in Turkey. Most of the refugees are Syrian Sunni Arabs who are beholden to Erdoğan for granting them refuge. For example, on February 9, more than sixty representatives of Syrian Arab tribes carried out a demonstration to support the Afrin operation by chanting slogans such as “Turkey will save Syria” in Mersin, Turkey. Many of them also see the YPG as an enemy of their faith.

Although the YPG administration insists it has evolved beyond the Marxist ideology of its founder, Kurdistan Workers’ Party (PKK) leader Abdullah Öcalan, many in the region note the markers of Marxist-Leninist teachings in the YPG’s current ideology. Neither can the Syrian Arab asylees return to homes and land controlled today by the Syrian Democratic Forces (SDF), currently the chief ally of the U.S. military. Further complicating the relationship is the longtime problem of forced military conscription of Arab teens into the ranks of the SDF, and lingering mistrust between the YPG Kurds and the Arabs.

Many Arabs also have recently started to voice their true feelings about the YPG-controlled SDF, For instance, an Arab schoolteacher in Manbij, Syria, recently claimed that “most Arabs in the town were unhappy with what they see as a Kurdish government, but were afraid to speak out for fear of arrest,” according to a New York Times report.

Turkey has built a network of influence over the Salafi-jihadi groups in Syria including Hayat Tahrir al-Sham, an Al Qaeda spin-off that controls the jihadi stronghold of Idlib, a territory with over two million inhabitants. The Erdoğan administration has been providing logistic support to jihadist groups since 2011, which Ahmet Yayla observed firsthand as a counterterrorism police chief on the border of Sanliurfa.

The Syrian campaign empowers Erdoğan’s supporters, many of whom have been trying to portray him as the leader of the Islamic world—an idea taken seriously by certain Sunni constituencies in Syria and the broader region. They warmed to him when he supported the Muslim Brotherhood takeover of Egypt after the so-called Arab Spring. Demonstrators in front of the White House shouted, “Recep Tayyip Erdoğan, true leader of Ummah,” while protesting President Trump’s December announcement that the U.S. embassy in Israel would move to Jerusalem.

Turkish proxies, including Turkish aid agencies and Turkish intelligence agents in Syria, have been invoking the historical concept of the caliphate among Sunni populations with the help of hard-line jihadists, local imams and sheikhs, while suggesting that Erdoğan is akin to a modern-day caliph, a leader over the entire Islamic world. For example, it was recently reported that “by early 2017 education, healthcare and religious institutions in northern Aleppo had largely come under the control of Diyanet, the Turkish Directorate of Religious Affairs, and a network of NGOs under its influence.”

Given the atrocities visited upon Syrian Sunni Arabs by the regime of Bashar al-Assad, they may very well prefer Turkey’s intervention, especially as Erdoğan has made overtures to protect Sunnis by fighting their enemies. There is understandable concern that without an American buffer in parts of northern Syria, there could be further bloodletting between Arabs and Kurds, despite existing partnerships between the two groups throughout other parts of the country. Accordingly, Erdoğan is attempting to cement his political legitimacy among Syrian Sunnis by portraying himself as their savior, even while his primary motivation is to counter Kurdish gains. But even as Turkey solidifies a foothold in further swaths of Syria, extricating its troops and its proxies may not be so easy.

Moreover, the Afrin operation itself faced numerous obstacles. The territory leading to Afrin is somewhat difficult to capture, which explains why Turkish proxies advanced very slowly at the beginning of the operation. According to the Syrian Observatory for Human Rights, a UK-based watchdog, Turkish air strikes around Afrin have killed 910 people, including two hundred civilians.

For now, the PKK is shying away from carrying out attacks inside Turkey, most probably to avoid provoking the already strained U.S.-Turkey relationship, due to the YPG-PKK connection. However, this could change soon, which could lead Turkish security forces to have difficulty countering a mass PKK campaign inside the country. Such a campaign would be bloody and extremely difficult for Turkey to control. Ankara experienced similar challenges throughout the course of a violent PKK campaign in early 2016, which lasted over a hundred days, and ended only when the Turkish special forces launched a full-scale offensive in the south of the country.

The YPG used antitank missiles to counter the advance of the Turkish-backed forces, a move that has already caused the deaths of several Turkish soldiers—an unwelcome turn of events back home. In fact, the Turkish forces and the FSA have found brand-new Russian and Iranian antitank missiles in Afrin’s YPG weapon depots.

Regardless of the obstacles, Operation Olive Branch has progressed toward its objectives, despite the ambiguity of the American military presence, which continues to respect Turkey as a NATO ally while working closely with the SDF to eradicate the Islamic State. Still, U.S. forces will not sit by idly if the Turkish military threatens further encroachment on current American positions. By sitting on the fence, Washington has allowed Erdoğan to strengthen his hand in the region and among his domestic constituency. Recent news reports suggest that the United States is preparing “a tentative package meant to appease the Turks” by offering concessions regarding disputed territory, including the possibility of joint Turkish-American military patrols in Manbij.

Meanwhile, Erdoğan has made it clear that Turkey will not stop after Afrin and will continue its operations until a complete corridor free of any YPG presence is established on Turkey’s southern border. During a recent address, Erdoğan proclaimed, “Once we have purged the terrorists from Afrin we will then cleanse them from Manbij, Ayn al-Arab, Tel-Abyad, Ras al-Ayn and Qamishli.” If the United States wholesale withdraws from Syria after the mission to defeat ISIS is considered complete, it will essentially be ceding the advantage to Erdoğan, who can continue pushing his agenda.

If the United States wants to cement hard-fought gains, it should consider pushing for a political settlement in Syria. That is the only way for the major powers in the conflict can hash out their issues at the negotiating table while avoiding further military incursions, which will only prolong the insurgency and make the prospect of post-conflict reconstruction even more daunting.

Ahmet S. Yayla is an adjunct associate professor at Georgetown University, a fellow in the Program on Extremism at George Washington University and a former counterterrorism police chief in Turkey. Colin P. Clarke is a political scientist at the nonprofit, nonpartisan RAND Corporation and a non-resident Senior Fellow in the program on national security at the Foreign Policy Research Institute (FPRI).