When Iran Comes In from the Cold... 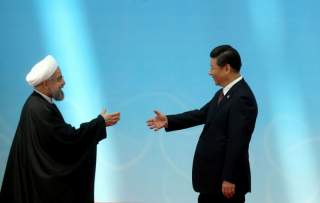 With nuclear talks extended for another four months, the P5+1 and Iran have been given a fresh chance to reach an agreement on the Iranian nuclear program. For the past six months, there have been few signs of consensus forming around a deal even as each represented nation expresses their desire to reach one, and reports from the negotiations indicate that the participating nations have major differences to reconcile before any agreement can be reached. It is possible that the extended talks will only result in further extensions or even a complete withdrawal from negotiations, but so long as some sort of nuclear deal is still feasible, it is necessary to consider the strategic implications of an Iran on the path towards rejoining the community of nations. Specifically, while any type of nuclear deal would create initial diplomatic and security complications for the United States within the Middle East and Central Asia, the long-term effects of such a deal would favor its national interests.

Any nuclear deal is only the beginning of Iran rejoining the global community. It is no secret that sanctions have severely hampered the Iranian regime, and part of its calculations for joining negotiations is that in doing so, the sanctions regime will be lessened. An agreement would initiate this process, but it would be slow and incremental at best; however, in the event that sanctions are lessened, the impact throughout Central Asia would be sizable. Last year, China began actively promoting its concept for a ‘New Silk Road Economic Belt,’ which would develop trade and infrastructure from Central Asia to the Mediterranean by building a network of railways and various energy source pipelines through strategically located countries throughout Central Asia. This continental economic belt is a priority strategic concept for China, and China will have to link Iran to its chain of investment in order to reach the Mediterranean. In fact, given the terrain and cultures the belt flows through, Iran is likely the most important location within China’s plan. China already has begun investing heavily in Central Asian nations (it recently announced a $30 billion investment in Kazakhstan alone), but substantial development, including access to Iran’s energy deposits and modernization of its energy infrastructure, requires the weakening or even the outright removal of the sanctions regime. Iran is important for China, which explains why China is one of the most vocal proponents of a comprehensive nuclear deal.

Beyond China’s plans for Iran and Central Asia, a change in the international status of Iran would have a massive impact on the surrounding region; with the sanctions regime up for discussion, the volume of trade between Iran and Central Asian nations is posed to increase dramatically and provide a boost for the economies of all the states involved. Iran would provide Central Asia with crucial access to sea trade routes, which would further expand their markets and give countries like Afghanistan a chance to stand on their own two feet post-U.S. withdrawal (though that would require a great deal of repair in the bilateral relationship between Iran and Afghanistan). Iran has occasionally tried to influence its neighbors with Iranian religious doctrine and its foreign-policy agenda, but its efforts have largely been rebuffed because of Central Asia’s generally positive relations with the West and its overall pragmatic outlook on economic development. The economic opportunities provided by Iran in this scenario would allow the Central Asian republics to have greater diversity in their foreign trade and be less dependent upon Russia and China. Greater economic activity throughout the region could help stabilize nation-states and mitigate the impact of transnational threats like the drug trade, terrorism and human trafficking.

Initial Complexities in the Middle East

While there is great potential of increased economic integration between Iran and its eastern neighbors in the event of a nuclear deal, Iran’s western neighbors, particularly the majority of members in the Gulf Cooperation Council (GCC), are suspicious of the potential for Iran to rejoin the community of nations. Since its foundation, the Islamic Republic of Iran has competed with the Kingdom of Saudi Arabia (KSA) for regional influence. Along with KSA, the United Arab Emirates, Qatar and Kuwait have all opposed Iranian influence spreading into the Gulf region and the Levant. Moves towards greater international integration would likely invigorate the Iranian economy and, in the eyes of its regional opponents, strengthen its ability to influence regional states in the Middle East. An economically revived Iran could increase its support for Hezbollah in Lebanon, for the Assad regime (if it retains power) in Syria, and a Shi’a-led government in Iraq.

Israel’s staunch opposition to a rising Iran adds further contention to these disputes within the Middle East. Iran’s past inflammatory rhetoric against Israel and threats against Israeli territory is a continuous complication to removing the sanctions regime. Israel is a vocal opponent of any type of nuclear deal, and it is likely that tensions will remain between the two nations regardless of whether Iran gets reintegrated into the international community.

China is also a central player in Iran’s future within the Middle East. China’s economic belt, which is already being initiated in Central Asia, would flow through Iran to the Mediterranean and south from Iran into the Gulf States. China already relies heavily on Middle Eastern fossil fuels to fuel its economy, and the primary reason for its continental belt is to avoid the complications of maritime trade routes and securing overland access to energy. Under the current conditions, KSA is China’s largest supplier of oil. Qatar is the largest provider of liquefied natural gas. China’s oil companies invest heavily in Iraq’s oil deposits. While this overland route would provide China relief from maritime apprehensions, it would also position China in the midst of a whole host of regional disputes. Its reliance on Iran as a key link in the belt will create automatic tensions with some Middle Eastern regimes. The belt’s path towards the Mediterranean creates another link between Iran, Iraq, Syria and Lebanon—a development to which Israel and many GCC states will object. Using Iran as a base for connecting the overland route with the GCC states will position China in the midst of a regional dispute. In short, China will face major unforeseen costs for this strategic endeavor.

The effects of a potential nuclear deal with Iran largely coincide with the interests of the United States. Moving towards integrating Iran into the community of nations (of which a nuclear deal is but the first step) would contribute to economic development in Central Asia, and such a prospect is a key policy objective of the United States. Progress on the question of Iran would create problems throughout the Middle East, but the status quo is hardly stable. For the United States, it would have to invest in its relationships and ensure that Iran follow strict rules regarding its integration into the global economy. A nuclear deal also opens the door for China to pursue its grand strategic vision for Asia. Some fear that such a development will spread the influence of China, but its influence is already well established in Central Asia and is not likely to solidify in the Middle East. In the meantime, the United States would find China becoming embroiled within Asia’s disputes and investing in ways to create stability, both of which would be positive outcomes.

Finally, two points must be emphasized. The first is a simple recognition that the changes described within this piece can only emerge in the event that some type of nuclear deal is agreed upon. The United States will not accept a nuclear Iran, and if the negotiations result in an agreement, then the United States achieves a major objective. Second, the United States will not disappear from the regional scene in any scenario. It will retain its regional bases, exert power through the Fifth Fleet, and rely upon its diplomatic corps. The options discussed here position the United States on firmer footing, while assisting in the broader development of continental Asia.