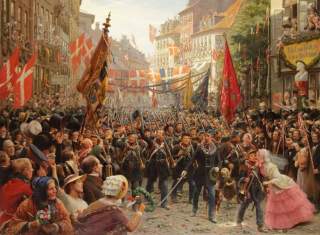 WHEN THE Cold War ended a generation ago, much of the Western foreign-policy elite asserted that nationalism was in decline. Old-fashioned national liberation movements were increasingly irrelevant; in a world with a single global economy, it didn’t really matter where borders were drawn. And if every country was going to be a liberal, individualistic democracy, whether the country’s population was dominated by a single ethnicity or made up of many different ethnic groups would not matter. The nation-state might not vanish entirely, but it would be largely dissolved by the two acids of economic globalism and liberal individualism. “Ever closer union” was expected to be the trend, not only in the European Union, but also in the world.

Since then, however, a series of events have disrupted this complacent liberal narrative of progress. For one thing, a populist revolt is taking place in Europe; the most vivid example is Brexit. Dismissed as a pipe dream by much of the British establishment, the impulse to sever ties with the EU turned into reality with the referendum in June. Nationalism is making something of a comeback in France and Germany, where the influx of refugees from the Middle East and North Africa and an upsurge in terrorist actions, mainly inspired by the Islamic State (ISIS), have created a backlash against large-scale immigration. At the same time, the United States has not been immune from a return to nationalism. The rise of Donald Trump, and apprehensions about immigration and free trade, signify that the old order is crumbling.

For all its vitality, the renewed centrality of nationalism in world politics has taken much of the Western foreign-policy elite by surprise. What the elite thought was the central question in world politics—how to govern—turns out to be a secondary question, which can be answered only after two preliminary questions have been settled. Who are we? And what should be the borders of our territory?

CONSIDER THIS example. In the second decade of the twenty-first century, the attention of the international community was riveted on a conflict-riven multinational state threatened with dissolution by ethnoregional strife. The U.S. government, fearing the loss of strategic military bases following partition, urged the country’s bickering nationalities to maintain the unity of their state. To avoid collapse, many argued for patching together the multinational state with new forms of federalism, transferring power from the central government to more autonomous regional communities.

Iraq? No, the United Kingdom. As it happens, a majority of Scots who took part in the September 2014 independence referendum voted “No.” But the seemingly misnamed United Kingdom is not the only multinational state whose borders are in question.

In the Soviet successor state of Ukraine, ethnic conflict has deepened into Cold War–style proxy war, with Russia backing Russian-speaking separatists against Kiev’s Western-leaning government. The Ukraine conflict comes on the heels of Russia’s intervention in Georgia on behalf of the self-proclaimed republics of South Ossetia and Abkhazia in 2008.

In the Middle East, the U.S. invasion and occupation of Iraq inadvertently triggered the dissolution of that artificial multinational state into de facto ethnic nation-states: Shia, Sunni and Kurdish. Syria, another entity created by Britain and France after World War I, like Iraq no longer exists as a functioning, sovereign state. ISIS pretends to be a new caliphate, but some speculate that it might be a nascent nation-state, “Sunnistan,” consisting of the Sunni-majority portions of Iraq and Syria, made more homogeneous by mass murder and ethnic cleansing.

The U.S. and NATO intervention that deposed Libyan dictator Muammar el-Qaddafi was a similar bloody debacle. Libya, an artificial state created by European colonialists à la Iraq and Syria, has fragmented along ethnic and regional lines.

This recent history suggests a paradox. On the one hand, America’s ill-considered wars of regime change have inadvertently accelerated the dissolution of former multinational states into more ethnically homogenous de facto nation-states. On the other hand, the U.S. foreign-policy elite has tended reflexively to oppose the partition of failed multinational states and the redrawing of borders along the lines of linguistic and cultural nationality.

To some degree, American opposition to the redrawing of formal borders is a Cold War hangover. Wars of national liberation from European empires sometimes turned into Soviet-American proxy wars, as in Africa in the 1970s and 1980s following the belated dissolution of the Portuguese Empire. And some of the greatest crises of the Cold War involved ethnocultural nations divided by artificial borders into Communist and non-Communist states: the Berlin crises, the Taiwan crises, and the wars in Korea and Vietnam.

While great-power confrontation is still a possibility in some national conflicts, as in Ukraine, in much of the world the voluntary or violent redrawing of borders no longer threatens to escalate. That fact explains why borders have been redrawn so often and so dramatically since the Cold War ended.

Since 1990, more than thirty new countries have been recognized as sovereign states by the international community, most recently South Sudan. Of these, fifteen are successor states to the Soviet Union, which dissolved in 1991: Armenia, Azerbaijan, Belarus, Estonia, Georgia, Kazakhstan, Kyrgyzstan, Latvia, Lithuania, Moldova, Russia, Tajikistan, Turkmenistan, Ukraine and Uzbekistan. Yugoslavia dissolved into seven successor states: Bosnia and Herzegovina, Croatia, Slovenia, Macedonia, Serbia, Montenegro (which broke off from Serbia in 2006) and Kosovo (which seceded from Serbia in 2008). The “Velvet Divorce” divided Czechoslovakia into the Czech Republic and Slovakia in 1993.

Outside of Europe and Asia, Namibia won its independence from South Africa in 1990. Three former U.S. trust territories in the Pacific won United Nations recognition: the Marshall Islands (1991), Micronesia (1991) and Palau (1994). Eritrea seceded from Ethiopia in 1993, and East Timor finally became independent in 2002.

The geopolitical map has also been altered by national reunifications as well as national secessions. In 1990, East Germany became part of the Federal Republic of Germany. In the same year, North and South Yemen merged to form a single country.

While the dissolution of multinational states can create local violence, as it did in Yugoslavia and Iraq, the concern that a nationalist independence conflict could be the next Sarajevo and set off another world war is increasingly implausible. Even the deepening tensions between the United States and Russia in eastern Europe and the Middle East, and between the United States and China in the Asia-Pacific, reflect traditional great-power jockeying for spheres of influence, not struggles for global supremacy.

THERE REMAINS another argument against formal partition of failed multinational states, which briefly became fashionable among transatlantic elites in the 1990s. This argument claims that in an era of globalization, national independence is not so much dangerous as obsolete, thanks to the erosion of borders by global financial and production networks and immigration.

Two stock-market crashes and a global near-depression later, the idea that nation-states are dissolving and will be replaced by a seamless web of global commerce looks much less attractive. But this vision was never plausible to begin with.

Globalization is overstated. Only 3 percent of people in the world live in a country other than the one in which they were born. Increased levels of immigration to the United States, Canada and Europe have produced a political backlash that is reshaping party politics on both sides of the Atlantic.

Some transnational supply chains are truly global, but some industries remain highly regionalized, and successful global corporations tend to be deeply rooted in one or another nation-state—chiefly the United States, Japan and Germany. Liberalization and globalization have proceeded the furthest in the area of finance. The result has been disastrous contagion, in the Asian financial crisis and the Great Recession and its aftershocks, including the Greek financial crisis.

Only a decade or so ago, some were holding up the EU as a model of a pluralistic, postnational future world order. The rise of Euroskepticism among national populists on both the left and the right, and the bitter struggles among debtor nations like Greece and lender nations like Germany, suggest that postnationalism is a mirage, in Europe as well as in the rest of the world. Scotland may yet secede from Britain, and Britons are on track to Brexit from the EU.

Far from being an outmoded relic of the past, nationalism is flourishing. It is the nonnational state that is an increasingly endangered species.

The reason is simple. The spread of democracy, beginning with the American and French revolutions in the eighteenth century, has been accompanied by the spread of nationalism. Democracy is based on popular sovereignty, the self-government of the demos, the people. But how is “the people” defined? By historic political boundaries? Or by shared characteristics—a common language, a common culture, common descent?

In Latin America, which acquired its independence from European colonial empires in the early nineteenth century, the successor states tended to be created from former Spanish and Portuguese provinces with inherited, more or less arbitrary territorial borders. Some of these ex-colonies—in which an elite of European descent frequently dominated Indian, mestizo or black lower classes—have been hierarchical caste societies lacking in a strong sense of national identity to this day.