When the Battle for Mosul Ends, the Fight for Iraq Begins 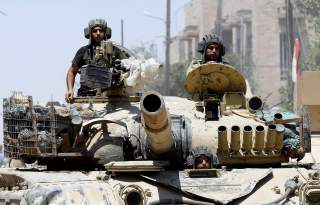 Iraq is at a crucial crossroads. The Iraqi government, backed by the United States and its coalition partners, is on the brink of retaking all major urban territories once occupied by ISIS. While very encouraging, the global coalition’s focus on militarily defeating ISIS obscures the fact that Iraq is beset by worsening sectarian tensions and proxy wars, political dysfunction and growing humanitarian crises. These perils, left unaddressed, will not only cripple international and diplomatic efforts, but also plunge Iraq further into instability and conflict long after ISIS is defeated on the battlefield.

In brief, the reality on the ground is as follows: the loosely held anti-ISIS alliance—which includes the Iraqi army, Shia militias, Sunni tribal units and Kurdish peshmerga forces—will likely dissolve; Iraqi-Kurdish contention over oil and gas revenues, budgets and land disputes is growing; and intra- and inter-Iraqi competition between and within communities over power and influence is flaring. Additionally, corruption, falling oil prices, a declining economy, and high levels of devastation from cycles of ravaging war against the Islamic State will not only continue to undermine Iraq’s recovery and stability but will also be a key factor in disenfranchising Iraqi society, particularly the youth. This point is critical. Violent extremism flourishes in societies where state institutions are seen as oppressive, corrupt, ineffective and illegitimate. Unfortunately, all these factors are present in today’s Iraq.

According to one estimate, Iraq needs about $60 billion to ensure the reconstruction of areas recaptured from ISIS. But due to massive corruption, structural economic mismanagement and decreasing oil revenues, the Iraqi government will not be able to afford the reconstruction of liberated areas without significant international aid.

Among certain senior Iraqi government officials, the message they are hearing from segments of the international coalition is, essentially: forget about reforms; focus on ISIS. An exclusive focus on defeating ISIS is, over the long term, counterproductive. Simply put, the fight against ISIS cannot come at the expense of encouraging and pushing for real, long-term political and economic reforms. Iran, the most powerful external actor in Iraq, is supporting the Shia militias and some Kurdish parties. Turkey is fighting the Kurdistan Workers’ Party and supports the Kurdistan Democratic Party of Massoud Barzani. The situation could be summarized as “no plan; too many plans.” Each internal and external actor possesses a plan that would strengthen its own position at the expense of a comprehensive, long-term plan that encourages mutual compromise and facilitates win-win solutions. Failure to recognize common interests would render defeating ISIS a pyrrhic victory, with catastrophic consequences for Iraq and the world as the void can be filled with a variety of warring factions.

The arduous effort that has gone into establishing and sustaining the global coalition to counter ISIS should not stop once ISIS has been driven from its territory. Iraq does not have the necessary finances to rebuild liberated areas. Instead, a global coalition is the only logical answer. An international donors’ conference, where regional and international donors will commit funding to help Iraqis rebuild Iraq, would send a strong signal of support that the global community will stand by Iraqis after the military defeat of ISIS. In addition to financial support, Iraqis are in dire need of the international community’s continued political engagement to put pressure on Iraqi leaders to combat corruption at the highest levels, reach mutual compromises, and implement true political and economic reforms. Donor support should be extremely conditional and contingent on the government’s commitment to good governance, respect for democratic principles, human rights and willingness to settle sectarian, political and territorial disputes. This is a tall order, but there are no alternatives.

The impressive progress in the battle against ISIS presents the ideal opportunity to develop a comprehensive vision and plan for rebuilding a post-ISIS Iraq. This requires a comprehensive approach that goes beyond rebuilding infrastructure; it must do justice to the complexities and shifting realities on the ground. What is required is a clear strategy—or to be more precise, the presence of multiple internal and external competitive and/or antagonistic strategies—that reflects the competing interests of stakeholders.

Issues that need to be addressed include stabilization—establishing a clear sense of normality—and reestablishing trust between different communities and governments with diverse and, at times, opposing narratives about root causes of the conflict and ways forward. The two key lessons learned from previous post-Saddam recovery plans—namely, inclusive politics and tackling ubiquitous corruption of ruling elites—are indispensable for post-ISIS recovery. The key building block is dialogue. Here, voices from Iraq, the Kurdistan Regional Government, Turkey, Iran, the Gulf Cooperation Council, the European Union and the United Nations should all be heard. In addition, the Iraqi state must win the trust and support of wide swathes of the local populations to defeat the conditions that breed violent extremism.

Kawa Hassan is director of the Middle East and North Africa program at the EastWest Institute and was a member of the Atlantic Council’s Task Force on the Future of Iraq.

Image: Iraqi soldiers look out from a tank as they advances towards the Islamic State militants positions in the Old City in western Mosul, Iraq June 18, 2017. REUTERS/Erik De Castro.