When War and Christmas Collide 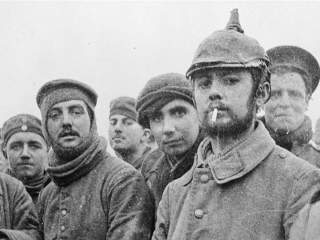 For decades, the story that German and British soldiers left their trenches on Christmas Day 1914 and played football in No Man’s Land has captivated readers. The idea that soldiers could find a basic, common humanity that their governments (and officers) had lost seemed to give a sense of hope in a century of unrelentingly grim warfare.

Over the last year, the famous “Christmas Truce” of 1914 has mostly generated debunkings and reappraisals; the “truce” was shorter lived and less consequential than many wished to believe at the time, or since. Still, we find the idea of the Christmas Truce appealing, because Christmas has become the central holiday of a religion that has, at its core, a deep pacifist appeal. The idea that Christian countries should set aside their disputes, at least for a day, is heartwarming, especially considering the horrors that soldiers suffered on the Western Front for the rest of the war.

Unfortunately, the notion that Christmas should serve as a moment of respite in war is often honored in the breach, even by Christian peoples. To be sure, it helps a bit that in the northern hemisphere, Christmas has historically corresponded with lulls in fighting, more because of bad weather than of the holiday itself. Commanders have often had good reason to take it easy and celebrate Christmas, if only because the conditions outside made military operations impossible.

It’s also only fair to note that the prominence of Christmas as a holiday is relatively recent. General George Washington famously made little allowance for the Christmas holiday when he crossed the Delaware in preparation for the Battle of Trenton in December 1776, although the Hessians were in a celebratory mood. But before Dickens, Christmas did not have its current resonance in the Anglo-American world, so we can perhaps excuse Washington’s audacity.

The Civil War, then, marked the first real observance of Christmas by Americans during hostilities. The North and South did not entirely cease fighting (various skirmishes happened on Christmas throughout the war), but they generally refrained from major operations. Exceptions include John Hunt Morgan’s 1862 raid into Kentucky, and the First Battle of Fort Fisher in 1864.

Christmas saw lulls in fighting on the Western Front in World War I, more because of operational and logistical reasons that any commitment to honoring the Prince of Peace. On the Eastern Front, Orthodox and Western Christmas never corresponded (the former is typically celebrated on January 7). Nor did war at sea observed the holiday. During the First Battle of the Atlantic, German U-boats regularly attacked Allied shipping. In 1915 one steamer was sunk by U-boats; in 1916 a pair of small vessels; and in 1917 ten ships.

Christmas fared a little better in the Second World War. Christmas 1939 saw quiet along the Western Front. In the north, the Soviets and Finns had exhausted one another after weeks of brutal fighting along the Mannerheim line. The only major casualties came with the loss of two steamers, sunk by mines laid from German U-boats.

These were the only Allied losses of the war on Christmas in the Second Battle of the Atlantic. Whether on purpose or by accident, the Kriegsmarine managed, for the duration of the war, to avoid torpedoing any ships on Christmas, although nine were lost on the 24th, and another four on the 26th. This forbearance didn’t extend to the German surface fleet, however. On Christmas Day 1943, the battleship Scharnhorst sortied in pursuit of a Murmansk convoy. The ship was caught and destroyed the next day by HMS Duke of York and a collection of cruisers and destroyers.

In 1944, some of the fiercest fighting of the war in the West came in the Christmas season in the Ardennes. On December 16, the Wehrmacht launched the last great mechanized offensive of the war, attacking the seam between British and American forces in Belgium and Luxembourg. The attack was a huge gamble that eventually failed; tough American resistance at Elsenborn Ridge, Bastogne and elsewhere exhausted the fury of the German advance. In horrific weather, the Allied counteroffensive managed to squeeze the Germans out, opening the way for the final offensives of the war.

The United States and the United Kingdom mainly avoided heavy raids over Germany on Christmas during the Combined Bomber Offensive. Bad weather contributed; finding German cities in poor weather conditions was notoriously difficult, and Allied commanders had little interest in wasting their bombers. In the Pacific, the B-29s of the XXI Bomber Command carried out several major raids in late December 1944, but none on Christmas Day itself.

In 1972, the United States launched an eleven day bombing campaign against North Vietnamese targets over the Christmas holiday. Hundreds of B-52s, F-111s and a host of other American aircraft bombed critical North Vietnamese infrastructure around Hanoi and Haiphong, in an effort to force Communist concessions at the negotiating table. Bombing began on December 18 and lasted until December 29, with a pause on Christmas Day itself. The bombing had little effect on North Vietnamese opinion, but it did manage to convince South Vietnam that the US still meant business. It also evoked sharp domestic and international criticism.

What have we learned? Christmas often provides a sense of hope that war may end soon, and at its very best an idea that all combatants share a basic humanity that crosses national and ideological lines. Unfortunately, this sense has only rarely manifested in an end to fighting, the fondest wishes of leaders and publics notwithstanding.