When Will the GOP Rally Around Its Front-Runner? 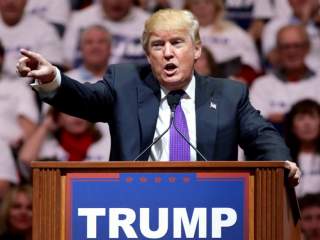 Throughout the 2016 presidential race, Donald Trump has benefited from the traditional rules not applying to him. After Super Tuesday, he would benefit from some of those rules.

If Trump was Mitt Romney rather than someone Mitt Romney trolls on Twitter, Republicans would be starting to rally around him as the clear front-runner and likely nominee. This effect so far seems limited to Chris Christie, who is being crucified for it.

Yes, Ted Cruz had a good night, especially with his upset in Alaska. Yes, Marco Rubio is no longer winless. Yes, Trump had some close shaves in states like Virginia and Vermont.

At the beginning of the race, Cruz was supposed to sweep the South and win conservative caucus states. Now it is considered good news when he occasionally wins in these places. His biggest slice of delegates is in his home state of Texas and it’s not clear the map gets better for him hereafter.

The race for the Republican nomination is far from over. But if Trump was a traditional front-runner, under the old political conventions a lot of GOP bigshots would be declaring it over. Instead from Romney to House Speaker Paul Ryan to Senate Majority Leader Mitch McConnell, they seem to be digging in against Trump.

One reason Trump would ordinarily be viewed as the prohibitive favorite to win the nomination is that primaries are usually driven more by momentum than the delegate math that technically determines the nominee. It’s usually the supporters of losing candidates who keep reminding everyone of how many delegates are still up for grabs after some other candidate has started piling up statewide victories.

This year the focus might be on delegate math rather than momentum. Trump’s rivals for the nomination are increasingly openly talking about trying to beat him at a contested convention rather than the primaries. They just want to do well enough to deny Trump a first ballot majority in Cleveland.

Some of this is born of necessity. Cruz and Rubio haven’t been able to finish each other off or really separate themselves from each other in any meaningful way. That alone prevents the great winnowing that was supposed to expose Trump’s vaunted ceiling in a one-on-one race.

Even a terrible news cycle in which Trump headlines mention the Ku Klux Klan didn’t stop him from winning Massachusetts by thirty points. He may not get to a majority, although we are fast approaching the winner-take-all states. But he has the best path to one.

Trump’s success and Jeb Bush’s failure exposed the limits of endorsements and fundraising. But right now, Trump could use the bandwagon effect of lots of endorsements and donors coming to his aid as the front-runner. It isn’t likely to happen anytime soon, unless Rubio blows it in Florida and Kasich similarly implodes in Ohio.

If the Republican establishment doesn’t like a GOP presidential candidate, usually they can count on movement conservatives to help them out. This time, no dice. It’s hard to know how much the #NeverTrump hashtag is an elite conservative sentiment that doesn’t really represent the grassroots—elite conservatives have been fond of futile gestures and expressions of impotent rage ever since Trump took his famous escalator ride—but the high percentages of Republicans who say they wouldn’t be satisfied with the billionaire as the nominee suggests this isn’t entirely a Beltway right phenomenon.

Trump hasn’t done himself any favors here. Establishment Republicans were starting to warm up to him a few weeks ago (or at least rationalize their anti-Cruz fervor by telling themselves Trump isn’t so bad). The closer he’s gotten to the nomination, the more erratic his behavior has gotten.

It was once easy to imagine Trump running a Republican presidential campaign that was free of neoconservative baggage on war, more solicitous of white working-class economic interests and cultural preferences and capable of over-performing with minorities on the basis of his appeal as a businessman and celebrity if not his political platform. In the general election, what even Jimmy Carter described as his malleability could be an asset: what Romney did in one shape-shifting debate, Trump could do in his entire campaign.

Much like Trent Lott’s inability to muster a convincing disavowal of racial segregation in 2002, Trump’s botching of questions about David Duke and the Klan is not a good sign for him as a general election candidate. At the very least, it suggests that the conventional wisdom that he could be used as a get-out-the-vote operation for Democrats among minorities could well be right.

Trump has so far thrived by breaking all the rules. It would be ironic if his undoing was the Republican Party ignoring the rules too.