Where Is America in Japan and India's Plans for Asia? 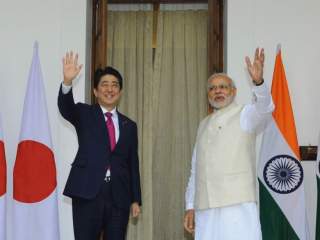 The recent visit of Prime Minister Shinzo Abe to New Delhi marks a new step forward in the quickly deepening ties between India and Japan. Each led by a conservative prime minister with a muscular foreign policy, the two countries are motivated by a desire to ensure stability in the Indo-Pacific region. They are also united by a concern about rising Chinese power and assertiveness and a determination to balance against it. Washington should welcome the new links between its Japanese ally and its Indian strategic partner and encourage their further growth.

The new warmth serves American interests in profound ways. By balancing China and ensuring that it rises in a region where the democratic powers are also strong and working together, closer ties between Tokyo and New Delhi help anchor a peace that is favorable to prosperity and liberal values. They demonstrate that, contrary to Beijing’s claims, the story of Asian security is about much more than an American fixation with “containing” China. And at a time of declining U.S. military resources and rising commitments in the Middle East and Europe, Indo-Japanese cooperation helps reduce gaps that would otherwise emerge in the rebalance of U.S. policy toward Asia.

Even before Abe’s trip—his third visit to India as prime minister—the two countries had established what their leaders described as a “special strategic and global partnership.” Prime Minister Narenda Modi has placed special emphasis on building closer ties with Japan since taking office, while Mr. Abe has sought both to increase economic relations with India and to enlist New Delhi in his plans to foster connectivity across the Asian landmass.

The recent visit saw a raft of advancements. The two sides inked a $15 billion high-speed rail agreement and a deal under which Japan will sell amphibious aircraft to India. Japan will henceforth join the Malabar naval exercises as a regular participant alongside India and the United States. Under still another agreement, New Delhi and Tokyo will share classified intelligence.

In addition, the governments reached a breakthrough in talks on civil nuclear cooperation that will likely lead to a final accord. Under it, Japan would export nuclear power production technology to India despite New Delhi’s nuclear weapons arsenal and its status as a non-signatory to the Nonproliferation Treaty. The deal will also enable American companies with partial Japanese ownership to make their own investments in the Indian nuclear power sector.

The India-Japan civil nuclear agreement will mark the first time Tokyo has reached such a deal with a non-signatory to the NPT – a step all the more significant given the politics in Japan surrounding this year’s seventieth anniversary of the Hiroshima and Nagasaki bombings. The agreement holds the potential to anchor transformed Indo-Japanese ties just as a similar pact galvanized a strategic partnership between Washington and New Delhi.

It’s not hard to see the impetus behind all the movement. India and Japan are united by democratic values, large market economies, regional heft and global aspirations. Both are increasing their defense budgets and modernizing their militaries to project greater power abroad. The two seek multiple economic arrangements that will enhance the flow of trade and investment.

Most importantly, both Japan and India are pursuing a classic balancing strategy with respect to China.

The Modi-Abe joint statement was filled with barely-veiled language that highlighted a raft of concerns with recent Chinese behavior. The two prime ministers emphasized their commitment to a rules-based order in the Indo-Pacific, called on all parties to avoid unilateral actions in the South China Sea, and urged a code of conduct for activities there. They underscored the importance of the Law of the Sea treaty so plainly ignored by Beijing in its maritime activities and expansive claims. The two leaders agreed to cooperate in safeguarding the space and cyber domains and welcomed trilateral dialogues with the United States and Australia.

All of this should be welcomed by a United States that seeks a peaceful Indo-Pacific region in which fidelity to the rules trumps brute strength and coercion.

Washington should further encourage warmer relations between India and Japan, just as it should foster the web of strengthened ties among across the Indo-Pacific. The aim should be not to ensnare China in that web but to ensure that the U.S. and its partners balance rising Chinese power and deal with Beijing from a position of strength.

This means exploring ways to deepen U.S.-India-Japan trilateral cooperation and quadrilateral partnership that includes Australia. It should include examining ways to foster the transfer of technology to India and Japan and exploring joint military production projects with both. Washington should enhance intelligence sharing and seek to establish with India and Japan a common operating picture of maritime and air activities throughout the Indo-Pacific region. With the appetite for American engagement in Asia high and growing, now is the time to leverage stronger ties between the partners in the interest of peace and stability.