Where Is America's Outrage over China's Treatment of the Uighurs? 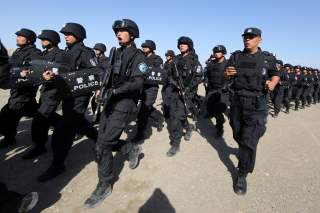 The Trump administration is reportedly considering sanctions against China in response to Beijing’s mass detention of ethnic Uighurs in its western Xinjiang province. This comes after a bipartisan group of lawmakers called the situation an “ongoing human rights crisis” and urged the White House to act. Yet it will take much more than a letter from Congress for President Donald Trump to become a champion of the Uighurs’ human rights. He and his advisers will have to be convinced that elevating the plight of Chinese Muslims above other elements of the U.S.-China relationship would clearly serve the president’s agenda.

The situation in Xinjiang certainly constitutes a grave abuse of human rights. According to the United Nations, up to a million civilians are being held in internment camps on the pretext that the Uighurs, by their very existence as a distinct ethnic and cultural group, pose a threat to China’s national security. Journalists and human rights observers tell stories of forced displacement, physical and psychological torture, family separations, and other atrocities. The scale of the hellishness is difficult to comprehend. But none of this means that President Trump will respond to Beijing with a firm hand. In fact, the greater likelihood is that Trump will refrain from punishing or even criticizing China too harshly—if he does at all.

In some respects, of course, it seems painfully overdetermined that President Trump will not make human rights a defining feature of the U.S.-China relationship. Who in their right mind would expect that Donald Trump, a man who once called for “a total and complete shutdown of Muslims entering the United States,” would voluntarily leap to the defense of China’s Muslim minorities? Trump has made it clear that the era of U.S. officials lecturing other countries on how to organize their internal affairs came to an end on January 20, 2017. And, in any case, Trump has actually praised President Xi Jinping for his authoritarian style of leadership.

On the other hand, Trump is more than capable of policy reversals and surprises. His decision to twice launch airstrikes against the regime in Syria, for example, flew in the face of earlier statements that the United States should not become involved in that country’s civil war. Perhaps notably, the first of these strikes were reported to have occurred after Trump viewed disturbing pictures of children dying from a chemical weapons attack, which convinced him of the need for decisive action against the “barbaric” government of Bashar al-Assad. Might Trump similarly be shown images of Uighurs being detained by Chinese authorities and conclude that America has a moral obligation to act? It’s not an entirely unthinkable outcome, especially as the president has previously shown himself eager to rile China over other issues such as Taiwan and trade.

Either way, domestic politics will play a significant role in determining the president’s response to the Uighur crisis. Like his predecessors, Trump will take the temperature of domestic opinion on China before deciding his next steps. If there is a significant political advantage to be derived from the Uighurs’ suffering, Trump and his advisers will seize upon the opportunity to beat Beijing with the stick of human rights—for cynical reasons if not out of genuine concern. But if the risks of antagonizing Beijing outweigh the expected benefits, then the White House will behave accordingly. As of now, the latter outcome seems most likely.

The reality is that U.S.-China relations are complex and multifaceted. From trade and investment to arms control and security competition in the Western Pacific, there are countless issue-areas over which Washington and Beijing are forced to reckon with each other. Many of these issues are thorny, to say the least. Only a few can be prioritized at any one time. U.S. leaders must, therefore, choose how to style their approach to China, usually with an eye to what else they are trying to achieve, both domestically and on the world stage.

Some presidents have wanted to cast China in an unambiguously negative light to secure backing for a larger foreign-policy program. Such was the case with President Truman, who emphasized the threat posed by Chinese communism as a way to build support for the wider strategy of containment. At other times, presidents have drawn attention to the benefits of cooperation with China in hopes of rallying domestic support for engaging Beijing. George H. W. Bush and Bill Clinton both sought to define the U.S.-China economic relationship in positive-sum terms, while President Obama frequently painted Beijing as an indispensable (if sometimes obstinate) partner in addressing a range of global challenges such as climate change.

Human rights have been a prominent feature of U.S.-China relations before. Between 1980 and 2000, China’s most-favored-nation trading status was made contingent upon an annual evaluation of Beijing’s human-rights record, which led to a ritualized (and humiliating) yearly admonishment of Chinese leaders in the U.S. Congress and news media—especially after the Tiananmen Square massacre in 1989. In 1992, Clinton ran for office promising to get tough on the "butchers of Beijing." At that time, brandishing the sword of human rights seemed like a good way to score political points at home and, perhaps, engender political reforms in China.

In time, though, the issue of Chinese human rights lost its potency as an issue in U.S. domestic politics. While Clinton began his presidency by attacking Beijing on human rights and threatening to curtail the bilateral trade relationship, he quickly reversed course. By the end of his second term, China had been granted permanent normal trading relations with the United States, and economic ties were blossoming. Under both Bush and Obama, the commercial aspect of U.S.-China relations continued to occupy center stage. Critics of China’s human-rights abuses did not disappear altogether, but they were much reduced in number and eclipsed by a well-organized (and overwhelmingly pro-China) business lobby. By 2009, diplomats such as Hillary Clinton could openly admit that humanitarian concerns should not be allowed to jeopardize the broader U.S.-China relationship.

Today, the political tide seems to be turning against China once more. Just as in the early 1990s, there is now an appetite in Washington, DC for a much tougher approach. On the campaign trail, Trump made “China-bashing” a regular feature of his stump speech in hopes of appealing to those who blame cheap Chinese products for America’s economic woes. Earlier this summer, Congress passed a bipartisan defense bill that singled out China as a threat to the United States. If they see a current need to mobilize U.S. opinion against Beijing, it is not unrealistic to imagine that strategists inside the White House or on Capitol Hill might view the Uighur crisis as an opportunity to rally even more Americans to the banner of anti-China politics.

Even so, it is not clear that embracing the Uighurs’ cause is something that will appeal to administration officials. What Trump wants from China more than anything else is some semblance of a trade deal that will allow him to claim “victory” in the domestic sphere. This could be voluntary export restraints, a commitment not to compete with specific U.S. industries, a favorable revaluation of the renminbi, or even a useful gesture from China that it is willing to close the trade gap. Securing any of these concessions will be a tall order. And while hectoring Beijing over the crisis in Xinjiang might help Trump gain leverage in trade talks, it might also further complicate the process of reaching an agreement that allows both sides to save face.

The most likely outcome, perhaps, is that the Trump team will wait to see how trade negotiations go before deciding whether to expand their criticisms of Beijing into other areas, including human rights and the Uighur issue in particular. If Trump goes beyond “cheap talk” to implement some meaningful sanctions, it will be because the administration wants to gain the upper hand in an increasingly adversarial relationship with China. It will not be a standalone decision; it will be part and parcel of a broader U.S. strategy towards its nearest geopolitical and geoeconomic competitor. At present, however, that outcome is a long way off.

Human-rights advocates should be heartened that the White House is considering sanctioning Beijing over its gross and unconscionable mistreatment of the Uighurs. But they should also be dismayed that attention is coming so late and will probably result in a few meaningful changes to U.S. foreign policy. More than anything else, the crisis in Xinjiang is a dog that hasn’t barked—an issue that could be used to criticize, undermine, and punish Beijing for its poor record on human rights, but has instead been left untouched by almost every high-profile U.S. politician on both sides of the aisle.

In the end, that politicians from both parties have paid such little mind to the Uighurs for so long says more about U.S. intentions vis-à-vis Chinese human rights than this recent flurry of purported interest. If the Trump administration decides to ratchet up the pressure on Beijing, it will be a significant development and a sign of wide-ranging shifts in how Trump means to deal with China going forward. Otherwise, the Uighurs will continue to be mostly ignored by actors inside America, regardless of how blatant, widespread, and horrific their treatment in Xinjiang becomes.