Where Obamacare Is Really Headed: A 'Robust' Public Option 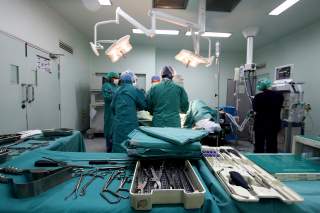 An average 25 percent jump in health-insurance premiums sold on Obamacare exchanges has administration officials and their congressional allies scrambling to find some rapid remedy to control costs.

One way to do this, as congressional liberals proposed in 2009, is to base public-option payment rates for doctors, hospitals and other medical professionals at Medicare levels—well below the reimbursement rates that private health plans maintain in the provider contracts. Paying physicians less would enable the public option to offer lower premiums, undercutting the market share of private health plans.

The administration and its allies promise that this advantage will enhance competition. In fact, it would reduce competition. More and more private health plans would continue to exit the market, joining the major exodus that started during the first three years of Obamacare’s implementation.

A recent Heritage Foundation analysis of the exchanges found that, next year, one-third of all U.S. counties will have only one insurer (“mini single-payer plans”); another third will have just two insurers. Essentially, Obamacare has consolidated the exchange market to the point that only a few “big players” are left to administer the plans.

But advocates of more complete government control over the health care sector of the economy, think they have a surefire way to secure that control: raw coercion. Here, they have a couple of options. For example, government officials could change the Medicare law and make physicians’ participation in the new public option a legal condition of their right to practice in the giant Medicare program. In certain states, like Florida, giving up Medicare practice is financially prohibitive for physicians.

On the supply side, coercing physicians and medical professionals to follow government reimbursement rules is standard political practice. One need look no further than the 2,400-page regulation issued to enforce the Medicare “payment reform” enacted in Medicare Access and CHIP Reauthorization Act of 2015 (MACRA).

On the demand side, Obamacare’s penalty for individuals who refuse to buy a government-approved health plan can be “upgraded” and more rigorously enforced.

This year, the annual penalty for individuals going without coverage is $695 or 2.5 percent of family income, whichever is greater. For 2017, the penalty is indexed to inflation. Even so, just in terms of dollars and cents, paying the penalty is a lot cheaper than shelling out a bigger chunk of personal income to buy an expensive health plan with big deductibles. For 2017, deductibles in the lowest-cost “bronze” plans average over $6,000 for a single person and $12,393 for family coverage. Moreover, under current law established long before Obamacare, access to hospital emergency medical care is legally available regardless of one’s financial capacity to pay for it.

Not surprisingly, the biggest exchange enrollment challenge is capture younger, healthier customers—those annoying millennials who don’t think buying an Obamacare plan is worth their time, effort or money. Frustrated liberals may regard them as spoiled brats. But their truancy—not ponying up their “fair share” to subsidize older and sicker enrollees—is another reflection of Obamacare’s design flaws: the restrictive age-rating rules overprice coverage for the young, and the standardized-coverage insurance package just doesn’t offer them value for the money. This flight of the young and the healthy from the Obamacare exchanges is a contributing factor to sharply rising exchange premiums—a major embarrassment to the president who promised, repeatedly, to cut health insurance costs. Obamacare’s champions, in academia and elsewhere, have another simple statutory answer: just toughen up the individual mandate’s “tax penalty”; hit the scofflaws harder. That is indeed the latest prescription endorsed by none other than Professor Jonathan Gruber of MIT, the so-called “architect” of Obamacare.

A public option with artificially low payment rates, reinforced by increased government coercion and tougher mandates on doctors—that’s a stiff policy cocktail. Imagine the hangover. Private health plans would be unable to compete with the artificially low payment rates of the public option; more and more enrollees would migrate to the public option, leading more and more private plans to withdraw due to declining market share. Voila! A government monopoly.

But how to secure financial stability for the robust public option on the way to market domination and control? Another painful prescription: force taxpayers to assume financial risk for the public plan. That’s precisely what House Democrats proposed in their initial version of the Affordable Care Act unveiled in June of 2009.

Imagine. A “robust public option,” enrolling millions of Americans as commercial carriers dropped out of the market, would become, just like the great Wall Street banks, simply “too big to fail.” It is likely that, at least initially, the artificially underpriced public option premiums will encourage the migration of poorer and sicker enrollees, and would thus require more and more subsidies to remain viable. Today, a money pit; tomorrow, a well-entrenched debt generator.

For politicians, forcing taxpayers to assume the financial risk for their policy mistakes carries a political benefit: more and more Americans would become directly dependent on government for their health-care dollars and decisions. It’s about power. And that, at the end of the day, is doubtless the true objective of this latest proposal.