Where the Iran-Saudi Showdown Will Erupt Next 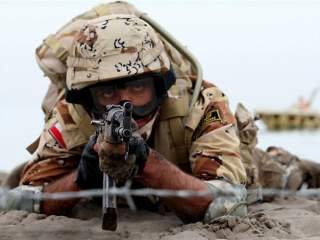 Relations between Saudi Arabia and Iran have soured before.

There was the time during the Iran-Iraq War when two Iranian warplanes crossed the so-called Fahd Line and were shot down by Saudi F-15s, triggering an air standoff. And there was the 1987 outburst of violence in Mecca that killed 275 Iranian pilgrims, leading angry demonstrators in Tehran to occupy the Saudi embassy—having your facility ransacked by mobs, possibly rent-a-mobs, is a feature of Iranian diplomacy.

The difference this time is the stakes are much higher. Saudi Arabia’s execution of Shiite cleric Sheikh Nimr al-Nimr was likely intended as a sop to restive conservatives. The government wanted to reaffirm its commitment to anti-Shia civic religion and distract from the death sentence it gave to forty-three alleged Al Qaeda members. But Nimr’s killing predictably infuriated Tehran, so those mobs reappeared to storm the Saudi embassy, and Saudi Arabia cut off diplomatic ties with Iran last weekend. All this, as the West is trying to cajole Iran back into the international community and stem a refugee crisis. The consequences could be enormous.

Start with Syria, where Saudi Arabia and Iran are essentially fighting a proxy war. Riyadh is trying to marshal the disparate rebels into a coalition while Tehran backs Bashar al-Assad. The two sides have since sat down for peace talks—a miracle in itself—but the negotiations have been rocky. One of the biggest stumbling blocks is simply that the Saudis and Iranians don’t trust each other. Expect the disdain at the negotiating table to be heightened, even as Saudi Arabia insists the talks will go on.

Bahrain could be another flashpoint. The island nation with a population of only 1.2 million is a curiosity: majority Shiite but governed by a Sunni monarchy. Mimicking the Islamic Revolution, a handful of Bahrainis attempted and failed to install a Shiite clerical theocracy in 1981, and the regime has accused Iran of meddling in its affairs ever since. Saudi Arabia has intervened in Bahrain too, deploying troops there in 2011 to put down Arab Spring protesters. When the Saudis cut ties with Iran on Sunday, Bahrain followed suit, and Shia spilled into the streets where they were met with birdshot and water cannons. Few places are as contested by both Saudi Arabia and Iran as Bahrain, and few places have as deep a sectarian chasm. It seems inevitable that more fissures will be ripped open there.

But perhaps the greatest potential for damage lies in the war against the Islamic State. The best way to defeat ISIS and prevent its afterlife has always been for the Middle East’s Sunni and Shiite powers to set aside their differences and work, at least temporarily, against a common enemy. That goal seemed quixotic and platitudinous even before the events of last weekend; today it sounds even more far-fetched. Wikileaks cables have shown that Saudi Arabia is obsessed with curbing Iranian expansion. The embassy attack will deepen its paranoia and further isolate Iran from the Arab world. More energy will be devoted to sectarian warfare and less to fighting ISIS.

Saudi Arabia and Iran matter to the West—because they have the most capable militaries in the Middle East after Israel, because they’re two of the last remaining fortresses of stability in the region and, most importantly, because they’re the repositories of Sunni and Shiite power respectively. Saudi Arabia is the heart of the wealthy Sunni Gulf, while the Ayatollah Khomeini’s visage can be seen on Shiite posters as far away as Lebanon. An attack on either one reverberates far beyond its borders and heightens the risk of sectarian violence across its sphere of influence. Because both nations are so integral to regional security, beating back Islamic terrorism will mean coaxing, wheedling and coercing them into being (relatively) responsible stewards of Islam. That becomes even more difficult when they’re at each other’s throats.

Part of that effort means supporting moderate elements in Iran like President Hassan Rouhani. Rouhani has delicately navigated the present crisis, denouncing both the embassy attack and the execution of Nimr. Thus far, he seems to have escaped the ire of Iran’s conservative media outlets. But with parliamentary elections looming in February, and with Rouhani himself running for a seat on the Assembly of Experts (the body that will select the next supreme leader), expect hardliners to make issue of his rapprochement with the world, and cite the Saudi flap as Exhibit A. As the National Interest’s John Allen Gay reported yesterday, the embassy attack may have been coordinated for just that purpose.

From Washington to Manama, very little good can come from this diplomatic rupture. So what should be done on our end? The United States would be wise to ignore those like Marco Rubio who think the solution is as simple as to “stand with our allies”—especially since the ally in question ignored our advice not to execute Nimr in the first place. Instead, it should take a balanced approach, tamp down tensions on both sides and work to foster a Saudi-Iranian relationship that’s competitive without being hostile. That means no more provocations and no more rent-a-mobs.