Where is Trump the Realist? 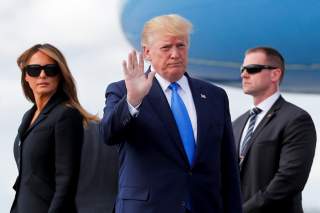 President Donald Trump’s iconoclasm provides endless fodder for critics of his foreign policy, who variously rail against his curt treatment of U.S. allies, rejection of free trade, and contempt for international institutions. Scarcely a month will pass without the President giving his detractors the gift of some gaffe or another. The layups have been especially plentiful for those with an interest in exposing Trump’s destruction of America’s global leadership role.

This cacophony of opprobrium was entirely predictable. But two-and-a-half years ago, it might also have been expected that an army of contrarians would leap forth to counterbalance those who defend the status quo ante. After all, there is no shortage of scholars, analysts, and pundits who call for the United States to adopt a slimmed-down global role. Shouldn’t these would-be retrenchers (or, “restrainers”) support Trump’s axe-wielding?

The truth is that voices in favor of Trump’s foreign policy moves have been few and far between—even within the (still somewhat incipient) restrainer community. Instead, Trump has endured flak from both sides. To internationalists, Trump is a know-nothing president who takes a perverse delight in wrecking America’s hard-won reputation as a benevolent global leader.

But to restrainers, Trump is a fair-weather friend at best. Even if his graceless hacking at the fabric of the “liberal” international order might sometimes lead to an accidental positive outcome, the President’s steadfast commitment to overseas militarism is doing nothing to solve the problems of America’s entangling alliances and its never-ending wars. Indeed, Trump is making matters worse.

Polish president Andrzej Duda’s recent trip to Washington, DC is an illustrative case in point. Under Trump, the United States and Poland have improved their bilateral relationship in some noticeable ways, especially when it comes to arms sales. Last year, Poland purchased $4.75 billion worth of air defense systems from U.S. firms, including Patriot missile batteries. Now, the Trump administration is keen to equip Poland with F-35 fighter jets. All of this is meant to put Russia on notice that Warsaw cannot be pushed around.

Arms sales such as these are music to the ears of restrainers, who have long argued that the United States should enable other countries to provide for their own defense—a sort of Nixon Doctrine redux—to facilitate America’s own military retrenchment. If Poland and other Eastern European states are nervous about an expansionist Russia, the argument goes, then why not sell them the military hardware necessary to deter Moscow themselves?

But as President Duda’s visit showed all too well, the Trump administration is not intent on matching arms sales with corresponding cuts to U.S. overseas deployments. On the contrary, Trump boastfully confirmed in the Oval Office that up to two thousand additional U.S. troops might be sent to Poland in the near term. These forces will enlarge an already substantial American presence in Poland, which usually totals around 4,500 troops at any given time.

Moreover, extra boots on the ground will be in addition to the $232 million that the Pentagon has earmarked for infrastructure spending in Poland, especially for the U.S. Air Force, and the revival of the U.S. Navy’s 2nd Fleet, which this month took part in naval exercises in the Baltic Sea. And so while plans for a new and grandiose military base in Poland (“Fort Trump”) might have been shelved, it is clear that the Trump administration has no intention of shrinking America’s physical presence along NATO’s eastern flank.

Those who advocate for a more circumscribed foreign policy have every reason to feel cheated. During the 2016 election campaign, Trump often talked as though he would govern in the spirit of retrenchment. He repeatedly emphasized the domestic costs of America’s post–9/11 wars in the Middle East, suggested that countries like Japan and South Korea ought to assume more of the burden for their own defense, and urged rapprochement with Russia as a way to lessen American commitments in Europe.

Yet not only has Trump expanded America’s military ties to North Atlantic Treaty Organization allies like Poland, but his administration has also supported new allies being brought into the fold. Tiny Montenegro joined NATO in 2017, North Macedonia’s accession process was formally kickstarted in February of this year, and Secretary of State Mike Pompeo has even declared that Georgia should be afforded NATO membership—despite that country being involved in an ongoing conflict with Russia over the separatist regions of Abkhazia and South Ossetia.

The dashed hopes of retrenchers don’t end there. From surging troops in Afghanistan to threatening war with North Korea, to supporting the Saudi-led war in Yemen, to backtracking from promises to withdraw U.S. troops from Syria, to threatening war with Iran—Trump has made a habit of dangling the prospect of retrenchment, only to yank it away later.

By now, it should be obvious: Trump won’t retrench. But why not? Part of the explanation is that Trump, for better or worse, does listen to his advisers on some foreign-policy issues. As he said of his decision to increase troop deployments to Afghanistan, for example: “My original instinct was to pull out, and historically I like following my instincts, but all of my life I heard that decisions are much different when you sit behind the desk in the Oval Office.”

Another reason is that Trump has genuine (and longstanding) affection for the military. He’s thus more likely to indulge the Pentagon’s requests far more than he is to insist upon cuts to overseas deployments or overall spending. Additionally, it is especially tempting for Trump to acquiesce in unabated militarism given that a penchant for the armed forces is one of the primary things that unites the (sometimes fractious) Republican Party in Congress and the country at large.

The truth is that America has options for dealing with its problem of “turbulent frontiers” in Europe, the Middle East, the Asia-Pacific region, and elsewhere. Permanent alliances and forever wars are only some of the tools available—and not very desirable ones at that. Other options include simply abandoning those frontiers (retrenchment) or shifting the burden of providing security onto regional allies (offshore balancing). Of course, using diplomacy to lessen tensions with America’s adversaries is perhaps the ideal solution.

Trump once sounded as though his presidency would tilt the balance of power in U.S. foreign policy in favor of those who yearn for America to come home. At times, he still does. But now that he has an actual track record to examine, the clear portrait is of a president whose commitment to militarism cuts in exactly the opposite direction of retrenchment and restraint. America First does not mean America alone. It means America everywhere—still.

He might be selling F-35s to Poland, but the bigger picture is that President Trump does not expect the Poles or any other U.S. ally to stand on their own two feet. America’s long-suffering cohort of retrenchers will have to wait another day.