Where Is Trump's Alleged Isolationism? 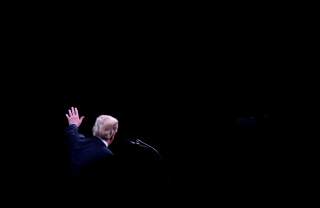 It’s nearly impossible to read major newspapers, magazines, or online publications in recent months without encountering a plethora of articles contending that the United States is turning inward and “going alone,” “abandoning Washington’s global leadership role” or “retreating from the world.” These trends supposedly herald the arrival of a new “isolationism.” The chief villain in all of these worrisome developments is, of course, Donald Trump. There is just one problem with such arguments; they are vastly overstated bordering on utterly absurd.

President Trump is not embracing his supposed inner isolationist. The policy changes that he has adopted regarding both security and international economic issues do not reflect a desire to decrease Washington’s global hegemonic status. Instead, they point to a more unilateral and militaristic approach, but one that still envisions a hyper-activist U.S. role.

For instance, it’s certainly not evident that the United States is abandoning its security commitments to dozens of allies and clients. Despite the speculation that erupted in response to Trump’s negative comments about the North Atlantic Treaty Organization (NATO) and other alliances during the 2016 election campaign (and occasionally since then), the substance of U.S. policy has remained largely unchanged. Indeed, NATO has continued to expand its membership with Trump’s blessing—adding Montenegro and planning to add Macedonia.

Indeed, Trump’s principal complaint about NATO has always focused on European free-riding and the lack of burden-sharing, not about rethinking the wisdom of the security commitments to Europe that America undertook in the early days of the Cold War. In that respect, Trump’s emphasis on greater burden-sharing within the Alliance is simply a less diplomatic version of the message that previous generations of U.S. officials have tried sending to the allies.

Moreover, Trump’s insistence at the July NATO summit in Brussels that the European nations increase their military budgets and do more for transatlantic defense echoed the comments of President Obama’s Secretary of Defense Chuck Hagel in 2014. Hagel warned his European counterparts that they must step up their commitment to the alliance or watch it become irrelevant. Declining European defense budgets, he emphasized, are “not sustainable. Our alliance can endure only as long as we are willing to fight for it, and invest in it.” Rebalancing NATO’s “burden-sharing and capabilities,” Hagel stressed, “is mandatory—not elective.”

Additionally, U.S. military activities along NATO’s eastern flank certainly have not diminished during the Trump administration. Washington has sent forces to participate in a growing number of exercises (war games) along Russia’s western land border—as well as in the Black Sea—to demonstrate the U.S. determination to protect its alliance partners. Trump has even escalated America’s “leadership role” by authorizing the sale of weapons to Ukraine—a very sensitive step that President Obama carefully avoided.

Trump even seems receptive to establishing permanent U.S. military bases in Eastern Europe. During a state visit to Washington in mid-September, Poland’s president, Andrzej Duda, promised to provide $2 billion toward construction costs if the United States built a military base in his country. Duda even offered to name the base “Fort Trump.” Trump’s reaction was revealing. Noting that Poland “is willing to make a very major contribution to the United States to come in and have a presence in Poland,” Trump stated that the United States would take Duda’s proposal “very seriously.” American Conservative columnist Daniel Larison notes that while Trump often is accused of wanting to “retreat” from the world, “his willingness to entertain this proposal shows that he doesn’t care about stationing U.S. forces abroad so long as someone else is footing most of the bill.”

U.S. military activism does not seem to have diminished outside the NATO region either. Washington persists in its futile regime-change campaign in Syria, and it continues the shameful policy of assisting Saudi Arabia and its Gulf allies pursue their atrocity-ridden war in Yemen. Both of those Obama-era ventures should have been prime candidates for a policy change if Trump had wished to decrease America’s military activism.

There are no such indications in Europe, the Middle East, or anywhere else. The U.S. Navy’s freedom of navigation patrols in the South China Sea have actually increased in size and frequency under Trump—much to China’s anger. Washington’s diplomatic support for Taiwan also has quietly increased over the past year or so, and National Security Advisor John Bolton is on record suggesting that the United States move some of its troops stationed on Okinawa to Taiwan. The U.S. military presence in Sub-Saharan Africa is increasing, both in overall size and the number of host countries.

Those are all extremely strange actions for an administration supposedly flirting with a retreat from the world to be adopting. So, too, is Trump’s push for increases in America’s already bloated military budget, which now exceeds $700 billion—with even higher spending levels on the horizon.

Accusations of a U.S. retreat from the world on non-military matters have only slightly greater validity. True, Trump has shown little patience for multilateral arrangements such as the Trans-Pacific Partnership, the Paris climate agreement, or the United Nations Human Rights Council that he concluded did not serve America’s national interests. On those issues, the president’s actions demonstrated that his invocation of “America First” was not just rhetoric. However, regarding such matters, as well as the trade disputes with China and North Atlantic Free Trade Agreement partners, the administration’s emphasis is on securing a “better deal” for the United States, not abandoning the entire diplomatic process. One might question the wisdom or effectiveness of that approach, but it is a far cry from so-called isolationism.

Indeed, Americans would have been better off if Trump had been more serious about challenging the policy status quo, especially with respect to security issues. A reconsideration of Washington’s overgrown and often obsolete security commitments to allies and clients around the world is long overdue. Abandoning the disastrous twin strategies of humanitarian military intervention and regime-change wars is a badly needed step. And waging a new cold war against Russia is the height of dangerous folly that needs to be reversed.

But contrary to Trump’s shrill—and sometimes hysterical—critics, America has had no meaningful reconsideration of such misguided policies or a willingness to adopt a more focused, limited, and prudent U.S. role in the world. Notions that there has been a pell-mell U.S. retreat from global leadership—i.e., Washington’s hegemonic pretentions—under Donald Trump are a myth. What Trump has adopted is merely a more unilateral and militarized version of a stale foreign policy that does not benefit the American people.