Which White House Staffers Have Resigned After Capitol Building Attack? 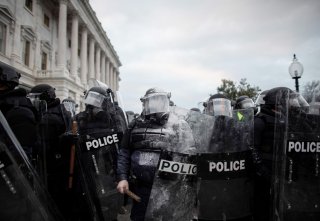 Editor's note: this piece has been updated with new information about who has resigned.

A spate of White House staffers resigned after the pillaging of the U.S. Capitol Building by a pro-Trump mob on Wednesday, and others are reportedly debating whether or not to scoot from the administration.

The wounding day on Capitol Hill left four dead as pro-Trump supporters rampaged through the building, shattering windows and torpedoing federal property. Several members of Congress were ordered to shelter in place, “duck” and hide in an undisclosed location when rioters unleashed guns and tear gas.

The terror swirled talks from both sides of the aisle to use the 25th Amendment that would remove President Donald Trump from office and put Vice President Mike Pence in power until President-elect Joe Biden takes the White House.

But as the unrest continues to stain Trump and his administration’s reputation, at least 13 White House staffers have decided to split from the team as of Tuesday morning.

Here are the Trump administration officials who have resigned following the raid at the Capitol.

Wolf, after serving in the chief role since November 2019, resigned just nine days before the incoming administration will take control of the White House.

“Unfortunately, this action is warranted by recent events, including the ongoing and meritless court rulings regarding the validity of my authority as Acting Secretary. These events and concerns increasingly serve to divert attention and resources away from the important work of the Department in this critical time of a transition of power,” Wolf said in a statement, becoming the third Cabinet-level official to leave the administration following the riots at the Capitol.

He also said that he was “saddened” to flee from the position, as he was planning on staying with Trump’s team until his term was over.

DeVos, confirmed as education secretary in February 2017, resigned from her Cabinet position on Thursday, saying she would step down on Friday.

“There is no mistaking the impact your rhetoric had on the situation, and it is the inflection point for me,” DeVos wrote, citing the deadly siege on the Capitol for one of the reasons for her resignation.

But she also noted, “holding this position has been the honor of a lifetime, and I will be forever grateful for the opportunity to serve America and her students.”

Chao, wife of Senate Majority Leader Mitch McConnell (R-Ky.) will reportedly resign from her role, according to The Washington Post, marking her the first Trump administration Cabinet member to step down after the lethal assaults at the Capitol that were incited by the president.

Costello adds to the string of administration officials fleeing from the president on Thursday morning, as he noted the havoc was “incited” by Trump and that Wednesday’s unraveling left him “no choice.”

“Yesterday’s events were an unprecedented attack on the very core of our democracy—incited by a sitting President. The President has long disregarded and diminished the rule of law and the constitution,” Costello said in a statement.

He continued, “During my time in office, I strove to further cybersecurity and national security on behalf of the American people. I am sorry to leave that work unfinished, but yesterday’s events leave me no choice.”

Mulvaney told CNBC on Thursday that he resigned Wednesday night, emphasizing that he “can’t do it” and “can’t stay.”

“I called [Secretary of State] Mike Pompeo last night to let him know I was resigning from that. I can’t do it. I can’t stay,” Mulvaney said in the interview.

“Those who choose to stay, and I have talked with some of them, are choosing to stay because they're worried the president might put someone worse in,” he added. “I wouldn't be surprised to see more of my friends resign over the course of the next twenty-four to forty-eight hours.”

Grisham was among one of the first staffers to resign Wednesday, though she reported that she considered leaving the administration several times.

“It has been an honor to serve the country in the White House,” she said in a statement posted on Twitter. “I am very proud to have been a part of Mrs. Trump’s mission to help children everywhere, and proud of the many accomplishments of this administration.”

Although Grisham didn’t offer a reason for her resignation, a source told Reuters that she withdrew from the first lady because of the violence at Wednesday’s events.

Pottinger also resigned on Wednesday afternoon in response to Trump’s handling of the mob attacks on the Hill.

Bloomberg noted that Pottinger was planning to resign on election day, regardless if the president won a second term, but decided to stay longer due to a colleague’s request.

Goodspeed, a top adviser to the president, reasoned the Capitol assault for his resignation on Thursday.

After telling White House Chief of Staff Mark Meadows of his decision, Goodspeed said in an interview, “The events of yesterday made my position no longer tenable.”

Elinore F. McCance-Katz, Assistant Secretary at the Department of Health and Human Services

McCance-Katz resigned Thursday night for the “violent takeover of the Capitol building,” noting the behavior was “unacceptable” and that she’s “simply not able to continue,” according to her statement.

“I very much hope that we will all take a step back and work through this painful time together—listening to each other, respecting each other, and bringing us together again as the great nation we are,” she added.

Matthews, who worked for White House press secretary Kayleigh McEnany, was also among one of the first to lead the rush of administration officials to depart from the administration, as Matthews said she was “deeply disturbed” by Wednesday’s events.

“As someone who worked in the halls of Congress I was deeply disturbed by what I saw today,” Matthews said in a statement. “I’ll be stepping down from my role, effective immediately. Our nation needs a peaceful transfer of power.”

Niceta, hired by Melania Trump in 2017, also followed suit, as she submitted her resignation Wednesday night in reaction to the Capitol assault on Wednesday, according to ABC News and CBS News.

“It is the duty of government to secure these rights, and it is the duty of the Civil Rights Division to protect all people in this nation against any violation of these rights, including hate-motivated violence, exploitation, unlawful discrimination and bigotry, and any other infringement of our Constitutional and federal civil rights,” Dreiband said in a lengthy statement. “The Civil Rights Division’s enforcement of our civil rights laws also punishes lawbreakers, vindicates the rights of victims, and sends a message to the nation and the world that the United States government and its people do not tolerate illegal bigotry, discrimination, and exploitation of anyone.”

Tully also joins the flood of administration officials who resigned due to the events at the Capitol that disrupted the electoral college certification process, Bloomberg reported Thursday morning.

Officials predict that additional White House staffers will step down from their roles in the administration in the upcoming days, with rumors already brewing about other key members considering to resign.

CNN reported that Liddell has spoken to sources about fleeing from the administration following Wednesday’s turmoil on the Hill, but McConnell reportedly called the top aide to “hold off resigning at least through Wednesday night.”

O’Brien is among another staffer that is considering resigning.

On Wednesday, the top aide took to Twitter to defend Pence for his work during the certification process and praised the vice president’s “courage” during the crippling events at the Capitol.

“I just spoke with Vice President Pence. He is a genuinely fine and decent man. He exhibited courage today as he did at the Capitol on 9/11 as a Congressman. I am proud to serve with him,” O’Brien tweeted.

If the rumors become true, that would make at least 15 White House staffers resign from the administration due to Trump’s incitement of the riots and hesitancy to condemn his supporters for ravaging through federal property.

The president finally committed to “an orderly transition” of power on January 7, a remarkable reversal from his previous claims that he would “never give up.”