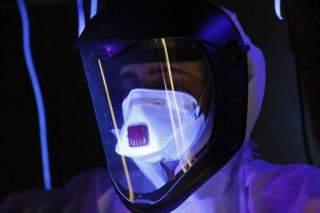 The news cycle has moved at a ferocious pace over the last several years as our attention has been sequentially riveted by predicament after unexpected predicament: from the Arab Spring to Putin’s annexation of Crimea, from the rise of ISIS to China’s extensive land reclamation on reefs in the South China Sea.  As the pace of news, coupled with new social media technologies that further hype the new “trending story,” many foreign policy analysts can be forgiven for complaining of severe whiplash at the rapid turn of events.

One storyline that seems to have been precipitously dropped by the media (with only few exceptions) concerns the Ebola Crisis in West Africa.  It’s easy to forget that this issue was the dominant news theme last summer and fall.

In September 2014, the Centers for Disease Control offered the dire, worst case prediction that as many as 1.4 million people in West Africa could be infected by January 2015. Some have faulted the U.S. response as coming too late to help the approximately 11,000 victims of the terrible disease.

However, even if the most dire predictions did not come true, the fact that 3,000 U.S. military personnel went bravely into this quite unprecedented and plainly risky situation to help to stem the outbreak undoubtedly reflects greatly on the U.S. armed forces as a “global force for good” and perhaps also their commander-in-chief, who made the difficult decision to commit sizeable resources to this noble effort.

Other U.S. government agencies (e.g. Public Health Service), as well as numerous American volunteers also played heroic roles—frequently risking exposure during the worst part of the crisis.  Still, the United States was hardly alone among the world community in lending a hand.  Little Cuba’s outsized contributions impressed many, for example.

But what of the emergent Chinese colossus?  This edition of Dragon Eye will attempt a modest and quite preliminary appraisal of China’s “非洲抗击挨博拉” [counter Ebola in Africa] campaign.

It seems that Beijing has not received due acknowledgement for an impressive effort, that featured significant participation from the People’s Liberation Army (PLA), among various Chinese government agencies.   China itself has been uncharacteristically modest about these achievements.  This may be an attempt to temper future expectations for the next big global outbreak.  More likely still, one may speculate that Chinese leaders were seriously concerned that “excessive” coverage of China’s efforts to counter Ebola could have incited major worries at home regarding the obvious risk of carrying the deadly virus back to China.  Such concerns would have been totally reasonable, moreover, if one simply recalls the jittery reactions of Americans with respect to returning aid workers.

As with most of the other members of the international community, China could be faulted for reacting somewhat slowly to the crisis.  The earliest pledge of assistance by Beijing in April 2014 amounted to a paltry $160,000 to contain the crisis in the entire region.  Over time, however, as the crisis deepened during the summer of 2014, additional assistance was promised and seems to have reached well over 100 million.

This amount is less than some other major powers, for example Japan, but then China also put significant “skin in the game,” as well as funds. Thus a November 2014 report in 环球时报 [Global Times] pointed out, for example, that while the United States was also providing resources, unlike China it was not directly providing military personnel to staff the facilities it was helping to set up.  The same report suggested that China had deployed more specialists and medical personnel to the region than any other single country.

This claim needs to be verified with other sources, of course, but Beijing may have indeed benefited in its effort from its recent, large-scale effort to counter the SARS epidemic.  In addition to hospital beds, ambulances, protective clothing, and stoves, China set up a 100-bed “Ebola Control Center” in Liberia with 160 doctors and nurses from the PLA to staff that facility.  China also worked with the African Union and the European Union to provide public sanitation courses, as well as setting up an “非洲疾病防空中心” [Africa Disease Control Center], according to a report in the State Council-affiliated journal 亚非纵横 [Asia & Africa Review].

The most specific information that has emerged from China regarding its Ebola response actually concerns the military unit deployed into Liberia.  This unit, frequently referred to as China’s “白衣战士” [white coat warriors] was operating under President Xi Jinping’s overall guidance to “大胜仗零感染” [fight on to victory, allow zero infection].

PLA Hospital #302 is identified as the main unit deployed into Liberia, but that hospital has drawn in medical personnel from across China’s military regions, including Shenyang and Chengdu, as well as Beijing.  In early September 2014, the doctors and specialists at this hospital were put on alert and ordered to prepare to deploy to West Africa to combat the “超级病毒” [super virus].  In preparing for the deployment, the hospital developed an elaborate process involving 36 discrete steps and 11 special garments to address “every conceivable risk,” and achieve a “stricter than strict” set of procedures to avoid infecting deployed personnel.

The initial deployment of PLA medical personnel succeeded in completing the 100-bed Ebola treatment center, a facility of 5,400 meters, by November 25.  The achievement was said in one Xinhua report to “彰显中国标准和中国速度” [to manifest Chinese standards and Chinese speed].

As with medical personnel from other nations directly involved in the Ebola maelstrom, the Chinese military doctors and nurses experienced a wide array of challenges, tragic circumstances, “恐怖” [horror], and poignant encounters.  A quite detailed account of the first military medical team’s activities appeared in a mid-January edition of 中国国防报 [China Defense Report].   In this report, one learns of the nervousness of confirming the very first Ebola case at the new treatment center, and about coping with the heat and the sweat.

There are other less obvious difficulties, such as the challenge of finding blood vessel veins for needles against the very dark skin of the local victims.  A 53-year old military nurse from Shandong, Chen Hongma, is said to come “面对面” [face-to-face] with the danger of Ebola infection in handling the blood of victims during her duties.  Another female member of the PLA-team in Liberia, Yang Limin, confronts the all-to-common reality that a young patient has just lost her mother to Ebola and so temporarily becomes her “中国妈妈”[Chinese mom].

The sixth detachment to rotate through the hospital #302 facility arrived in mid-April.  That deployment brought the number of PLA personnel rotating through the facility to nearly 500.  As of April 2015, that unit had treated 938 sick persons, diagnosed 295 as confirmed cases of Ebola, and cured and released 25 of those infected with the virus.  Figures on fatalities were not available, but must be assumed to be high given the virus’ extreme lethality.

China has also accomplished major feats against Ebola in Sierra Leone as well, for example at the Sierra-Leone-China Friendship Hospital that was also converted to serve as an Ebola treatment center.  Moreover, it should be noted that the first Chinese medical teams to go into the Ebola Crisis were not from the PLA, but rather from the China National Health and Family Planning Commission.  About the August 2014 decision to send these teams, one early Western academic appraisal of China’s efforts made the following observation worth quoting at length:

“Observers found it notable that China did not pull back its personnel and instead sent more in. ‘Even by dispatching just a few teams, it was a signal of recognition from the Chinese of the gravity of the situation as an international emergency,’ said Dr J. Stephen Morrison, director of Global Health Policy Center at Washington-based Centre for Strategic and International Studies. ‘They are not running away from it, they’re running towards it.’”

The information in this Dragon Eye column hardly constitutes a comprehensive study of China’s effort against Ebola and that story continues, moreover.   Such a project, using a wider array of sources as well as interviews while applying due skepticism, may await the patient spadework of an ambitious graduate student in search of a thesis.

The latest news on the Ebola front seems promising in that an Italian nurse, who had contracted Ebola in Sierra Leone and was being treated in Rome, made an “absolutely miraculous” recovery after taking a new Chinese-made drug. And he was not the only aid worker to be healed by this cure.

The New York Times adopted a skeptical stance regarding this development, emphasizing that the Chinese drug could violate certain patent laws and has not been sufficiently tested in randomized trials.  For that matter, neither the New York Times nor the Washington Post, arguably the nation’s two best newspapers, have done a single story (to this author’s reckoning) focusing on China’s efforts to assist in the 2014-15 Ebola crisis.  Admittedly, journalism in these circumstances is exceptionally challenging.  And yet, both these papers seem quite fixated on revealing all other aspects China’s expanding global influence, so perhaps this area also deserves some attention.