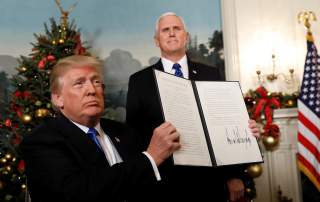 The Trump administration stated that shifting the U.S. embassy from Tel Aviv to Jerusalem, a maneuver that will occur next week, is in the “best interests” of the American people in a private briefing Friday morning. So far, the administration added, preparations are proceeding smoothly.

The ceremony next week in Jerusalem—which President Donald Trump, Vice President Mike Pence and Secretary of State Mike Pompeo passed on, but will be attended by Jared Kushner, Ivanka Trump and Treasury Secretary Mnuchin—follows the U.S. decision this week to exit the Iran deal.

Conservative activists in the United States and Israel cheered the developments on Thursday.

The move to Jerusalem promotes “the American interest for peace and stability in the region,” an administration official said. “We’ve recognized the obvious: despite the best of intentions, after fifty-one years since the Six Day War. … The Israeli-Palestinian conflict is no closer to a solution.” The official said the embassy, long sought by and even called the “crown jewel” of Middle East policy by conservatives, is one of several “leverage points” that “will create a better dynamic for peace.”

“The Palestinians essentially had a veto on the recognition of Jerusalem as the capital of Israel,” said the official, assigning their side leverage “in a way that’s not helpful.”

A viewing party will be held on the day of the ceremony, Monday, May 14, for all interested Trump administration officials in the Executive Office Building in Washington.

It was disclosed that Israeli Ambassador David Friedman will continue splitting his time, as he has from the beginning of his tenure, between Tel Aviv, the location of the Defense Ministry and other offices, and Jerusalem, the location of the president’s office and the Knesset.

Friedman’s apartment is in Jerusalem.

The administration shot down assertions that a number of allied countries were passing on attending festivities and events related to the opening.

“The opening of the embassy is a bilateral celebration between Israel and the United States,” said a Trump official; no other diplomatic corps were invited.

The Israeli Ministry of Foreign Affairs is holding a separate event Sunday night, but the United States could not specify the guest list.

The administration said it was taking every precaution for safety, and said it was consistent with U.S. values to honor all peaceful protests.

But officials castigated Hamas for protests that employed violence or incendiary imagery.

The administration above all else Friday morning sought to cast the dual moves by President Trump -- moving the embassy, and withdrawing from the Iran nuclear deal -- as successful in shifting the paradigm in the region and securing Israel’s continued security.

“We had yesterday the Bahrain foreign minister tweeting … [about] Israel's right to self-defense against Iranian aggression. So, I think this wraps up any notion that this has isolated Israel in any way in the region,” an official said.