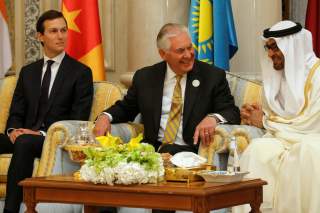 In October Jared Kushner made a secret trip to Saudi Arabia. Ever since the revelation of the trip, controversy has swirled around it. Kushner has made a peace agreement in the Middle East a priority and, indeed, Al-Monitor is reporting that Israeli prime minister Benjamin Netanyahu may be receptive to an American peace proposal. Now, the White House is strenuously denying a report by defense reporter Mark Perry in The American Conservative that Senior Advisor Jared Kushner likely greenlit—without consulting the State Department—controversial moves by Saudi Arabia. The National Interest has not independently verified the report, but the issue is attracting considerable attention.

For its part, the White House is unequivocal: “Any interactions Jared has with the Saudis goes through the interagency process,” an administration official told me by phone Tuesday. “That report is complete and total nonsense.”

Kushner traveled and met with Crown Prince Mohammed bin Salman (commonly referred to as “MbS”), heir apparent and an ascendant power player in the kingdom, late last month. “Their conversations focused on Israeli and Palestinian peace,” the White House says.

But others are calling that into question. And the State Department and Secretary of State Rex Tillerson’s office declined to deny the report, after repeated attempts to reach at least three different press officials in Foggy Bottom Tuesday. Perry states that Tillerson was blindsided by Kushner. According to Perry, “More crucially, Tillerson’s views are sharply at odds with a White House that has shown a willingness to take Saudi claims at face value.”

“Man, this is about the least controversial piece I’ve written in about two years,” Perry told me by phone. “I agonize over these pieces: I don’t put them out there lightly.”

Says TAC editor Robert Merry, who is a former editor of the National Interest and a respected presidential historian: "We stand by our story."

The secretary “wasn’t only angered by Saudi Arabia’s failure to give the U.S. a heads-up on their Lebanon plans,” Perry’s report alleges. “[Tillerson] suspected that the White House knew of the plan for Hariri ahead of time, but failed to tell him. The culprit, as had been the case of the Qatar crisis, was Jared Kushner, the president’s thirty-six-year-old son-in-law.”

There can be no doubting that Saudi Arabia has been flexing its geopolitical muscles since Kushner’s visit and embarked upon a purge of the Saudi elite. But is it really linked to Kushner or is the connection only in the eyes of the critics? One person who has attested to Kushner’s potential importance in the Middle East among Arab leaders is former president Jimmy Carter. Carter, who negotiated the 1978 Camp David Accords between Egypt and Israel, told the New York Times earlier this month, “I’ve seen in the Arab world...the high esteem that they pay to a member of one’s own family.” For now, the jury is out on Kushner’s efforts in the Middle East.