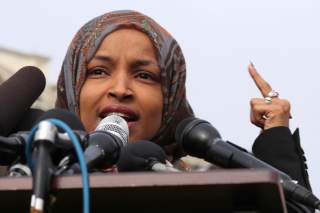 For months the freshman class of the House of Representatives has generated a disproportionate number of headlines, particularly the newly elected crop of women. From uniformly wearing white at the State of the Union address in solidarity with the suffrage movement, to their many group Instagram photos, these Democrats have eagerly donned the mantle of female empowerment and progress.

While it’s normally New York’s Alexandria Ocasio-Cortez stealing most of the media’s attention, yesterday the commentariat was focused on thirty-seven-year-old Minnesota Representative Ilhan Omar. Born in Mogadishu, Somalia, Omar arrived in the United States as a refugee at the age of fourteen. She was involved in state politics before being elected as one of the first two female Muslim members of Congress (alongside Michigan’s Rashida Tlaib), along with being the first Somali-American elected.

Omar is no stranger to controversy when it comes to one of her most outspoken issues: the Israeli-American relationship. On the campaign trail she was criticized for tweeting in 2012 that “Israel has hypnotized the world, may Allah awaken the people and help them see the evil doings of Israel.” Omar is a supporter of the Boycott, Divestment, and Sanctions movement.

Then Sunday evening, in a response to Pulitzer Prize-winning journalist Glenn Greenwald’s observation that “It’s stunning how much time US political leaders spend defending a foreign nation [Israel] even if it means attacking free speech rights of Americans,” Omar tweeted in response “It's all about the Benjamins baby,” a reference to a 1997 Puff Daddy song. When the Opinion Editor of The Forward (a Jewish magazine) said she “[w]ould love to know who @IlhanMN thinks is paying American politicians to be pro-Israel,” Omar responded flatly “AIPAC!” She then temporarily retweeted a response to her comments that read in part “She might as well call us hook-nosed.”

The criticism was overwhelming. Responding to a tweet that Omar should learn “to talk about Jews in a non-anti-Semitic way,” Chelsea Clinton tweeted “Co-signed as an American. We should expect all elected officials, regardless of party, and all public figures to not traffic in anti-Semitism.” The former first daughter of the Democratic Party received plaudits from Republican pundits the rest of the day. Congressman Max Rose of New York, a fellow freshman who is also Jewish, released a statement that read in part “Congresswoman Omar’s statements are deeply hurtful to Jews, including myself. Implying that Americans support Israel because of money alone is offensive enough. But to go a step further, and retweet someone declaring their pain at her sentiment is simply unacceptable.”

Republicans were even harsher. Senator Tom Cotton defended the American Israel Public Affairs Committee saying “@AIPAC promotes better understanding of the Middle East, combats the ancient hatred of anti-semitism, & strengthens the US alliance with Israel. I’m grateful for their work & I always look forward to seeing them. Thank you!” Former Ambassador to the United Nations Nikki Haley tweeted, “To see this at the UN was a fight every day. This CANNOT be tolerated in our own Congress by anyone of either party. In a time of increased anti semitism, we all must be held to account. No excuses.” Rep. Liz Cheney said Ilhan Omar should be removed from the House Foreign Affairs Committee. Senators Ted Cruz and Marco Rubio made connections to the wider views of the Democratic Party, with the former asking “Do other Dems agree?  Will media ask them? As more Dems support BDS, anti-Semitism becoming far too common,” and the latter saying that “The growing anti-Semitism from the radical left is alarming.”

Ilhan Omar was not without her defenders. Independent journalist Michael Tracey spent the day supporting her comments, saying in one tweet “It should not be controversial to observe that AIPAC and affiliated donors exert outsized influence on Congress through lobbying, donations, and other means. If you label this ‘anti-semitism,’ that's your own paranoia speaking.” Mondoweiss, the progressive Jewish news outlet, spent the day linking to old articles covering the Israel lobby and promoting John Mearsheimer’s and Stephen Walt’s 2007 book The Israel Lobby and U.S. Foreign Policy. Josh Kaplan wrote a defense of Omar’s comments in Spectator USA, saying that the pro-Israel lobby is one of many groups in Washington D.C. who use money to buy influence.

Finally, in a joint statement the entire Democratic House leadership issued a full condemnation of Congresswoman Omar’s statements. “We are and will always be strong supporters of Israel in Congress because we understand that our support is based on shared values and strategic interests,” read the statement. It continued, “Congresswoman Omar’s use of anti-Semitic tropes and prejudicial accusations about Israel’s supporters is deeply offensive. We condemn these remarks and we call upon Congresswoman Omar to immediately apologize for these hurtful comments.”

Hours after Nancy Pelosi sent out the statement, Ilhan Omar issued her own apology:

“Anti-Semitism is real and I am grateful for Jewish allies and colleagues who are educating me on the painful history of anti-Semitic tropes. My intention is never to offend my constituents or Jewish Americans as a whole. We have to always be willing to step back and think through criticism, just as I expect people to hear me when others attack me for my identity. This is why I unequivocally apologize.”

She ended this unequivocal apology by closing it with “At the same time, I reaffirm the problematic role of lobbyists in our politics, whether it be AIPAC, the NRA or the fossil fuel industry. It’s gone on too long and we must be willing to address it.”

Regarding the entire controversy and the overwhelming reaction, Vox editor Matthew Yglesias tweeted, “Congressional leaders of both parties really did a good job today of debunking the notion that pro-Israel groups wield disproportionate influence on Capitol Hill.”