Who Attacked a Russian Military Base with a 'Swarm' Strike? 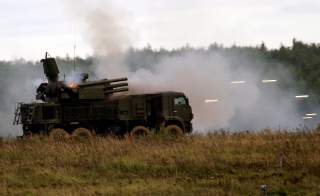 Russia is pointing fingers in all directions as it attempts to decipher who, exactly, attacked the Khmeimim air base and Tartus naval base in Syria by deploying a massed flight of what appear to have been home-made GPS-guided drones. The coordinated attack marks the first time that drones have been used en masse—and may well mark a dangerous new moment in the history of technology and warfare.

None of the thirteen bomb-laden drones made it to their targets—the Russians repelled the makeshift unmanned strike aircraft either by using anti-aircraft missiles or by intercepting them with electronic warfare to take them under direct control. In addition, Russian television is showing extensive footage of Russian attacks on the village of Muazzara from whence the drones were fired.

Moscow seems to believe that Syrian-based insurgent groups had foreign help, including satellite guidance. Indeed, Moscow has implied that the United States, Turkey and Ukraine are involved in the attacks. In the case of Turkey, however, the Kremlin quickly backtracked. During a meeting with news editors in Moscow, Russian president Vladimir Putin explicitly said that Turkey was not involved and did not directly finger Washington. According to Putin, “Those were provocations aimed at disrupting the earlier agreements, in the first place. Secondly, it was about our relations with our partners—Turkey and Iran. It was also an attempt to destroy those relations.We have a perfect understanding of that and will act in solidarity.”

“It is impossible to develop such drones in an improvised manner,” Maj. Gen. Alexander Novikov, head of the Russian General Staff's Office for Unmanned Aerial Vehicle (UAV) Development, told reporters on Jan. 11. “They were developed and operated by experts with special skills acquired in countries that produce and apply systems with UAVs.”

The Russian Defense Ministry does not dispute the fact that much of the hardware used to construct the fixed-wing drones—which have a range of roughly 60 miles and carried 10 bomblets each—is commercially available. Moscow, however, is suggesting that the manner in which the aircraft were designed, built and launched—not to mention their specialized munitions—serves as a potent indication that the group that launched the attack had outside assistance.

“In order to produce these drones, such components as engine, servo units, and electrical batteries could be bought on the market,” Novikov said. “However, assembly and use of these components in the joint system are a complicated engineer task demanding special training, scientific knowledge, and practical experience of producing these aircraft.”

Further, Moscow argues that the software needed for coordinated launch efforts and precise targeting of the Russian bases would have required specialized navigational data—precise beyond what is available freely on the internet. “Special software is required for using fire means of the drones,” Novikov said. “Insurgents needed to receive sharp coordinates of targets and take into account numerous parameters as altitude, flight speed as well as wind direction and speed in order to reach necessary strike effectiveness.”

The bottom line is that insurgent groups have technical capabilities far beyond anyone expected—and the Kremlin is unwilling to accept that insurgents could have developed such a capability independently. “Such lethal devices require special expertise, practical skills and operating experience in the sphere,” Novikov said. “The fact that terrorists have received assembly technology and programming technology is the evidence that this threat stretches far beyond the Syrian borders.”

The Russians apparently know that the attack was launched from Muazzara, in the Idlib de-escalation zone. Moreover, the Russians apparently know which group was responsible for the attack—likely Ahrar-Ash-Sham. However, the Russians did not back off from an earlier implicit accusation that the United States had a hand in the attack. “It is a strange coincidence that during a UAV attack on the Russian military facilities in Syria, a US Poseidon reconnaissance aircraft was cruising for more than four hours over the Mediterranean Sea at an altitude of 7,000 meters,” a Russian Defense Ministry source told the TASS news agency on Jan. 9.

More recently, the Russians have implied that Ukraine might have had a connection to the attack. “One should pay attention to munitions carried by the drones,” Novikov said. “These are 400g improvised explosive devices with fragmentations (small metal balls). The effective area of such munitions is up to 50m. Each drone carried ten munitions. Preliminary researches have showed that the PETN, which is more powerful than RDX, was used as explosive basis in munitions. The PETN is produces by a number of countries, including Ukraine at the Shostkinsky Chemical Plant. This explosive material cannot be produced in an improvised manner or extracted from other munitions.”

Olga Oliker, senior adviser and director of the Russia and Eurasia Program at the Center for Strategic and International Studies, told The National Interest that some of the Russian accusations seem excessive. “I would also point out that Russia’s statements run counter to the idea that Turkey, Russia, and the US want to be effective about deconfliction and crisis management in Syria,” Oliker said. “One hopes that in a crisis, all parties assume that the other(s) is(are) not trying to start/escalate conflict, and because of that, the system ‘fails safe’ and doesn’t escalate. So even if you wonder if the other guy is helping the group that just attacked you, you don’t immediately start with a public accusation. If the Russians—or Americans, or anyone else—is looking for opportunities to accuse the other party, the chances that the system ‘fails dangerous’ go up.”

Meanwhile, even if the Russians have some valid concerns about how the attackers obtained their weaponry, Moscow’s strategy of casting accusations in all directions is in part retaliation for what the Kremlin considers to be unfounded assertions made against it. “I would speculate that there was something about the precision of the targeting that made them think that the attackers had help of some sort,” Oliker said. “And, I think, a certain amount of general paranoia feeds this, too and as the U.S., Turkey, and Russia all support different parties in the Syria war, if any of the three is attacked by a Syrian group, they may naturally wonder if that group’s outside sponsor was somehow involved. More cynically, I suspect there may also be a perception that the Americans—and Ukrainians—accuse Russia of spurious—in their narrative—things, so turnabout is fair play. But it does seem a bit like grasping at straws at this point.”

A number of western analysts believe that Moscow may be underestimating the sophistication and technical expertise of modern insurgent groups—or conversely overestimating the difficulty of acquiring the technology to launch such an attack. The Pentagon predicted such a threat earlier in its Joint Operating Environment 2035: The Joint Force in a Contested and Disordered World document.

“It is actually surprising that this sort of drone attack has not already happened more often,” George Beebe is director for intelligence and national security at the Center for the National Interest—formerly director of Central Intelligence Agency’s Russia analysis—told The National Interest. “The technology is widely available commercially, and contrary to Russian assertions, the technical expertise required to mount this kind of attack is not particularly sophisticated and is fairly widespread. The U.S. made drone strikes a key part of its counter-terrorist operations at a time when few countries could match our capability, but we did so with seemingly little regard for what would happen when our state adversaries and non-state actors inevitably began getting their hands on the technology. The attack in Syria is a preview of what might soon be pointed at the U.S.”

Unmanned systems expert Samuel Bendett, a researcher at the Center for Naval Analyses, agreed with that assessment. Unmanned aircraft technology is proliferating rapidly and is no longer confined to military and intelligence circles. “Not ‘anyone’—but sophisticated UAV education and knowledge is spreading and more and more people are starting to get access to what was once very classified and proprietary data, including technologies that enable UAV flight and operation,” Bendett said. “Making a UAV frame is not that complicated.”

So while the Kremlin might claim that terrorist groups are not capable of building weapons of such sophistication, the world has entered a brave new era where almost anyone has access to devastating weapons. The threat will only continue to grow.

In that sense, Novikov is exactly on target, so to speak. “Such lethal drones can be applied by terrorists in any country, targeting not only military objects,” Novikov said. “To eliminate such threats, it is important to start addressing it today, and organize cooperation of all interested sides at international level.”

And indeed, it will take a coordinated global response to prevent these weapons from spreading further. The Syria attack may simply have been the start of a dangerous new era.