Who Benefits from the Rift Between Germany and America? 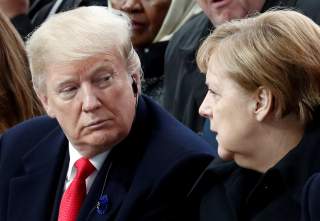 The United States has just determined the treaty on Intermediate Nuclear Forces (INF), mainly so because the aggressive impulse of Russia’s revisionist strategy has not diminished in recent years. At the same time, the predictable outcry in Berlin about American escalatory policies and a new nuclear arms race merely reveals a lack of strategic finesse as to how to confront Russia’s frighteningly clear plans to redraw, and remake, Europe’s geopolitical map.

Ironically, if Germany sided with America on Nord Stream 2, it would effectively threaten one of Russia’s economic lifelines and thereby cleverly alienate Vladimir Putin from Donald Trump, against the latter’s pro-Russian intentions. A significant transatlantic side-effect of such German finesse would be to tie down Trump’s anti-NATO inclinations and provide much-needed strengthening of Eastern NATO members. Most of whom have grown suspicious of Chancellor Angela Merkel’s intentions. After all, the recent French-German compromise on the need to apply EU regulations has not altered the strategic picture as it left the Russian state-firm building the pipeline to conclude, “This is good news for Gazprom.”

Currently though, the reality looks distinctively different. When Putin invaded Crimea in 2014, Americans and Europeans put their hopes in Merkel. They presumed that Merkel’s upbringing in East Germany, her command of the Russian language, Berlin’s economic weight and Obama’s blessing would render her an effective crisis manager.

Miss Merkel’s Russia policy has been twofold since then. On the one hand, Germany’s impressive economic power has provided her with the sticks of (EU) sanctions; on the other hand, often ignored, she has offered Putin (a lot of) carrots by signaling that he may rely on her guaranteeing the continued building of pipelines through Eastern Europe, such as Nord Stream 2 (which will provide 20 percent of Berlin’s gas imports), despite stark objections from the latter. Her argument that the pipelines have no political connotation and are exclusively about (private) business has aimed to abort the debate about them—albeit unsuccessfully.

Notwithstanding Merkel’s achievements, the record of her strategy vis-à-vis Putin must now lead to a recognition that Berlin’s appeasement policy has failed. While often downplayed, America already warned Europe of new Russian nuclear forces, such as the INF breaker 9M729, in 2014. Indeed, Putin has no intention of changing. Look at Crimea, a burgeoning stockpile of tactical and strategic nuclear weapons directed at Europe, constant disregard for the Minsk agreements, the Skripal attack, the Azov Sea, daily (cyber) threats towards smaller Eastern European states and the pernicious wooing of Trump—Putin has made it clear, time and again, that he will not accept the end of the Cold War as the final verdict of history. In fact, the moment in which America will be absorbed in a war in East Asia, which is no longer unlikely, Putin will seize his opportunity and militarily reverse the international rule-based order and its Western geopolitical map. While there may come a time to talk to Putin or his successor at some point in the future, now is not the time. Merkel should therefore change course now and use the pipelines as coercive tools. In other words, Germany (and others) should blockade the pipelines and open them only if Moscow dramatically alters its overall view of, and approach to, Europe. In the meantime, U.S. gas is readily available.

Whether she will, remains unclear, though. For instance, while speaking in Davos recently, she referenced Max Weber’s famous speech about the nature of politics, held in Berlin exactly one hundred years ago. But politics, or strategy for that matter, has never only been about compromises and “slow, strong drilling through hard boards,” as Merkel has stressed, according to Weber; rather, at times it is much more about choosing and seizing the right moment for decisive action.

Some suggest that, after fourteen years in power, she may be burnt-out and thus no longer able to undertake a strategic turnaround of her longstanding policy regarding Russia. But by far the biggest obstacle for change is that she wholeheartedly despises Trump and his domestic and foreign worldviews. Nowhere was that clearer on display than when she reminded her audience, in the presence of the incumbent U.S. president, that late president George H. W. Bush had imbued the international rule-based order with supreme value. While her remarks were certainly well-intended, Merkel appeared to ignore today’s realities and, more importantly, she provided a disservice to this order by widening the personality, and consequently, the transatlantic gap even further, thereby needlessly playing into Putin’s hands. But outright dismissing any proposals of “the Donald” is not a strategy. A strategically more effective way of strengthening the transatlantic West would be to recognize the failure of her own appeasement policy and choosing U.S. gas over Russian gas, thereby alienating Putin from Trump and strengthening NATO’s cohesion. Additionally, siding with Trump on his post–INF policies will further deepen Putin’s reluctant disagreement with POTUS.

Against the conventional wisdom held in Berlin, Trump has offered Merkel the keys to safeguarding NATO—possibly unintentionally.