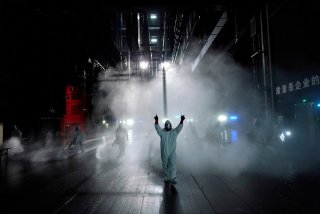 WHEN IT became clear that the “Grand Alliance” that defeated the Axis powers during the Second World War would not endure into a postwar “Pax Americana,” American strategists and policymakers were forced to confront the realities—and potential costs—of engaging in an adversarial geopolitical and ideological contest with the Soviet Union. They soon came to understand that defeat would imperil not only the security of the United States but the very “American way of life.” To forge effective strategies to contain the USSR, it would be necessary to contemplate risks and possible losses. With the introduction of nuclear weapons into the mix, it was understood that any clash with the Soviets could be quite destructive in terms of American lives and property. Yet America’s Cold War strategic thinkers did not simply throw up their hands and declare the task to be insoluble. Instead, they came up with the framework for the cost-benefit analysis of superpower competition. From the “concept of tolerable loss” developed by General Robert Richardson to the writings of Herman Kahn, Cold War strategists understood the importance of finding ways of preventing unpleasant outcomes from becoming catastrophic ones. Lampooned by musicians such as Tom Lehrer or spoofed in such films as Dr. Strangelove, this way of thinking about the unthinkable helped to guide U.S. administrations to successfully navigate out of the Cold War with the United States as the sole remaining superpower.

After the collapse of the USSR, American strategists embraced the hope that the application of democratic peace theorems, aided and abetted by globalization, would obviate international rivalries in the twenty-first century by incentivizing rising and resurgent powers to accept their positions within a U.S.-led and managed international system. But countries like China or Russia want to revise that system in directions that the United States does not wish to proceed. While we are nowhere near the conditions of the twentieth-century Cold War, the assessment of the 2018 National Security Strategy—that the world has returned to conditions of “great power competition”—is valid. Yet, while “great power competition” is the new flavor of the month in the U.S. national security community, where are the twenty-first-century versions of Herman Kahn, coldly calculating what and how much America must be prepared to risk to retain its position in the world? For Americans, great power competition remains, for the most part, a bloodless bumper sticker where the United States expects to compete and prevail against its competitors without paying much of a price. The problem, however, is that other great and middle power rivals—China, Russia, Iran, and others—have come to play—and have been prepared not only to pay but also to inflict costs on Washington.

AT THE start of 2020, China’s inability to contain a lethal coronavirus outbreak in Wuhan inflicted the COVID-19 pandemic on the world. And while the virus is not a “weapon of mass destruction” on the scale found in Cold War arsenals, the deaths attributed to the virus in the United States are equivalent to the casualties that would have resulted from the detonation of a small nuclear device in an American city. Whether we like it or not, the coronavirus pandemic is now part and parcel of great power competition, a reality, again, recognized by our competitors. Speaking at the United Nations General Assembly in September 2020, Russian foreign minister Sergei Lavrov complained, “The attempts of some states to use the current situation in order to promote mercenary, momentary interests are evident, to settle scores with undesirable governments or geopolitical rivals.”

The virus has already inflicted its damage on the United States. The challenge for American strategists is how to prevent the pandemic from further weakening the United States and strengthening its rivals. However, there seems to be a curious disconnect on the part of American strategic thinkers, between discussing how great power competition plays out in economic statecraft (the Belt and Road Initiative, the race to build a 5G network) or in gray-zone competition (in cyberspace, for instance) and the unwillingness to address how the damage caused by coronavirus may be turned to American advantage. Perhaps this is a reflection of a lingering idealism (as expressed in spring 2020 by Bill Gates) that while adversaries may choose to hack into each other’s computer systems, when it comes to disease, we can still hold out hopes for a World War II-style grand alliance bringing the nations of the world in common cause to fight a global plague. It may also be that the prevailing narrative—as captured by American expatriate journalist Thomas Chatterton Williams in his reporting from Paris over summer 2020 for The Atlantic—to see the U.S. response to the pandemic as an overwhelming failure while overestimating the success of others in coping with it, shifted the focus away from the more important consideration: not whether the United States has been more successful in dealing with the coronavirus, but whether the virus is inflicting greater costs and challenges for others. As much as many Americans believe that the United States has utterly failed in its response to the coronavirus pandemic, does that justify the assessment of Vladimir Putin, speaking at the Valdai forum in October 2020, that the United States has lost its exceptionality and that the balance of global power is shifting, especially in favor of China and Germany? In other words, have we reached a point where COVID-19 is imposing intolerable or unacceptable losses for the United States—or have other countries reached that point first?

Revisionist powers like China, Russia, and Iran were once considered to be presenting challenges to America in key regions of the world. Some even went so far as to suggest that they were on the verge of displacing the United States. With all our domestic preoccupations, it may be tempting to look inwards but today we have a unique opportunity to pursue geopolitical advantage. A strategist, after all, is called to identify courses of action with a serious chance of leading to satisfactory outcomes—including in times of war or national tragedy.

IT IS important to separate the generally negative assessment of the response of the U.S. government to the coronavirus pandemic in terms of domestic health policy from how the United States has leveraged COVID-19 in terms of the global balance of power. Indeed, the assessment that the United States has been a geopolitical loser from COVID-19 rests upon two assumptions: that other countries have recovered faster from the deleterious impact of the virus and that the United States squandered a chance at global leadership in responding to the pandemic. During the spring and summer months of 2020, pundits repeatedly predicted that other countries would recover faster from the negative effects of the pandemic than the United States, and that the mantle of global leadership would pass to Beijing or Brussels or even some sort of Sino-European partnership.

None of these prognostications seem as plausible six months later as a second wave of the virus exposes shortcomings all around the world. For all of the talk of how key European and Asian countries would be well along in their recovery, that reality has not occurred. As Russian State Duma speaker Vyacheslav Volodin briefed Putin, “There is no secret that we are running budget deficits and economic growth rates are in decline, just as in other countries.” China claims that it will post a modest rate of growth for 2020—around 2 percent—but this bit of good news does not make up for the various shocks COVID-19 has delivered to the Chinese system.

Of America’s great power competitors, Russia appears to have been hurt the most by the pandemic. Russia itself has been battered by both the first and second waves of the virus, with nearly two million cases that have tested a brittle health care system. After confident announcements over the summer that Russia’s Sputnik-V vaccine would be in place to secure the health of Russians, Putin admitted in the fall that problems resulting from the lack of equipment and industrial capacity would hamper the production and distribution of the vaccine. Moreover, in the wake of a costly energy price war with Saudi Arabia in spring 2020, the pandemic has collapsed global demand for energy, dropping prices below the budgetary break-even point. Russia’s “rainy day” funds can cover budget deficits, but the pandemic will cut into Russian defense spending and on state investments in the new Arctic infrastructure projects on which Putin is hoping Russia’s great power future can be secured.

As for filling the supposed void of U.S. leadership, what events over the course of 2020 have repeatedly demonstrated is that no other major power is willing to bankroll any such aspirations by providing global goods at their own expenses. Pepijn Bergsen of Chatham House has observed the continuing divisions within the European Union and the reluctance of a number of EU states to “sending their taxpayers’ money” to other members of the Union—not to mention to other countries outside the bloc altogether. The European Union cobbled together a joint pandemic response, including the provision of financial aid to member-states, but, as European Commissioner for Budget and Administration Johannes Hahn recently noted in comments to the Financial Times, “This initiative the European Council agreed to in July can really be a game-changer, but it all depends on how well we implement it. We are by no means through.”