Who Congress Should Really Listen to on Foreign Policy: Voters 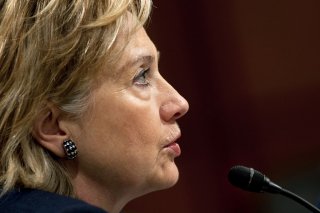 Think the public doesn’t care about foreign policy? Ask Barack Obama, who built his 2008 campaign on a foundation of popular anger over Iraq. Yet, Congress—the people’s representatives and the branch closest to the mood of the country—routinely cedes foreign policy decision-making to executive branch bureaucrats.

Like everything else, the Founders subjected foreign policy power to checks and balances, but Congress routinely leaves its most powerful tools fallow. Now and then, the House of Representatives threatens to withhold funds for a significant foreign policy issue (e.g. Iraq), and, occasionally, the Senate will block an ambassador about whom nobody cares. But otherwise, the Congress seems to throw its hands up and give the executive free reign.

Syria presents a looming civics lesson. All indicators point to a Clinton presidency, which means a push for no-fly zones in Syria. Congress had better be careful. Voters may not support a no-fly zone, and if Congress becomes complicit in pushing one forward, the country's politics will look far Trumpier than even now.

Unless Congress relearns how to influence foreign policy, the country will sleepwalk into Hillary Clinton’s proposed half-baked military solution just because the think tank community wants it and because it appears to be the opposite of President Obama’s Alfred E. Neuman approach to Syria. If public opinion gels against it, the GOP will pay dearly at the polls. Congress needs to do its political due diligence. Be wary of following experts over a cliff.

The first thing Congress should do is knock off the nonsense that resistance to no-fly zones means someone is an isolationist, pro-Russian or okay with genocide. Those are infuriating arguments for opponents (i.e. voters) whose concern typically revolves around a no-fly zone’s efficacy—why are we doing it?—or mission creep.

The GOP has still not come to terms with Iraq. Witness Sen Rubio. He ran for president on a platform that the Iraq war was a good thing and that Syria needs similar medicine.  Understandably, voters view GOP foreign policy with a skeptical eye. “What is the goal?” "How do no-fly zones achieve it?" “Would this not only reprise the 1990s creeping mission against Saddam Hussein?” If the public approves of those answers, proceed.

Yet, teasing out these answers falls to Congress. The executive branch will not do it.  Remember, they have experts who think they know the answer. Congress must start small.  Define the threat. Pass legislation spelling out that there are multiple issues in Syria: ISIS, Assad, and Russia. Make clear that no-fly zones address the latter, and do not let the administration conflate the threats.

Teasing out those questions will require Congress to make better use of hearings. Congress must relearn the art of holding them. Carefully conducted, hearings should powerfully amplify a message and frame political contrasts. Beltway wonks relish a good game of gotcha, but using basic policy questions (e.g., “Who do you want to achieve in Syria?”) is a better way to embarrass and pressure the executive.

Incidentally, message to Congress: think tanks are not your audience; voters are. Hearings should generate headlines. Congress needs to invite better witnesses—not just think tank experts—and ask better questions. Members must stop asking questions that generate minutiae. Nobody cares, and, besides, that is why Congress has staff. Ask questions that prompt answers voters care about.

Here, topics matter, too. Here’s one: Obama’s Syria policy creates a situation where Iran has thousands of ground troops, Russia bombs with impunity, we stand at cross purposes with our NATO ally Turkey, and we expend enormous effort to force our Sunni Arab allies in the Gulf to stand idly by and observe a Sunni Arab genocide. This strategy, such that it is, has an obvious problem. Eventually, our Sunni Arab allies will involve themselves, and they will stop listening to us. The corollary is that Assad labels all dissenters as terrorists and kills them, so when our Gulf Arab allies do lose all patience with us, their only remaining potential partners on the ground will be ISIS and Al Qaeda. Surely, the public cares about a strategy that will force our allies into the arms of Al Qaeda.

Congress can do more than just hold hearings. Without dispute, the president is the chief diplomat, but that does not mean Congress cannot communicate with our allies. Invite Gulf Arab allies to address Congress and hold consultations. Do what our diplomats cannot do and explain our political constraints. Ask them, “Given those constraints, how can the United States and its allies defeat ISIS?”

In reality, Clinton should welcome this as she helped plant the seeds of Obama’s Syria policy while secretary of state. No president wants to admit failure, and, with Obama planning to remain in Washington D.C. after his presidency, she may be loath to criticize him. Realistically, she may chafe at Congress’ efforts. Good. Congress can do this seven times, once with each Gulf Arab country. If Clinton still refuses to work with Congress, it can start highlighting the immigration crisis caused by Syria and start inviting our 28 NATO allies, one-by-one to talk about it.

Heretofore, Congress has done little more than appeal to virtue and hope that voters pressure the president and his experts to change course for having a lack of it. Half a million dead Syrians speaks volumes their relative immunity from political pressure, though.

Corralling moral outrage is not enough. Congress needs to relate the foreign policy to the public.  Syria presents plenty of issues that people care about: immigration, giving allies no choice but to work with Islamic radicals, potential mission creep that could see the United States reprising some of the 20 year Iraq saga, cost, and so on.

Even if the voters do not get animated about Syria wonkiness, they will start reacting to the domestic implications. George Washington made this point multiple times in his Farewell Address when talking about "enlightened" public opinion. But that only works—Congress’ check on the Executive only has traction—when Congress enlightens it. That does not mean educating them or trying to spark moral outrage; it means highlighting political contrasts and relating the issues to a local audience. Nobody should excel at that more than members of Congress, but currently they do not.