Who is Fred Fleitz? 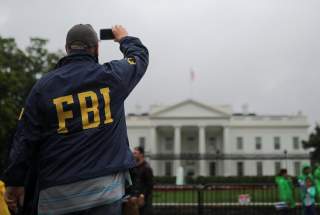 Upon publishing the article, “Iran Hardliners Are Lining Up Behind The Bolton Plan to Leave the Deal,” in the National Interest last fall, I was immediately attacked, on Twitter, by one man: Fred Fleitz.

My article in question detailed how Fleitz’s employer, the Center for Security Policy, had aligned itself with a hardline plan on Iran authored by Bolton, then outside the White House, at the urging of former White House Chief Strategist Steve Bannon. I had interviewed Fleitz’s boss, Frank Gaffney, weeks before.

The article detailed parts of the interview, as well as noting the unusual alliance with Bannon, who was at times referred to in the press as “Trump’s dove.”

For his part, Gaffney has harbored a long-standing fixation with the Muslim Brotherhood, going so far as to accuse prominent Washington figures as being agents of the group—including Center for the National Interest board member Grover Norquist.

I alluded to these obsessions in the piece and didn’t expect much of a response because it was an old feud.

Fleitz went ballistic. In tweets that now appear to be deleted, he referred to his C.V. as a CIA veteran, and attacked my standing to report on the established fact of Gaffney’s wacky crusade against Norquist because of my lack of intelligence community experience.

His other comments aren’t worth relaying.

It is this figure that will succeed the staid Gen. Keith Kellogg as NSC chief of staff.

Kellogg now works for Vice President Pence, as of late April, after being passed over for the National Security Advisor job itself in favor of Bolton. Kellogg’s scuttled candidacy was relayed to me by a former senior White House official.

I haven’t had further interactions with Fleitz, and a one-off defense of his boss might not be predictive of a coming combative tenure at the White House. But Fleitz’s hiring signals three developments clearly: Bolton’s propensity to tap hardline loyalists; Bolton’s readiness to associate with Iran and North Korean regime change advocates; and Bolton’s assiduous staffing of Russia investigation critics.

Fleitz’s hiring came parallel to the White House acquisition of Sarah Tinsley, who worked for Bolton’s super PAC, and Garrett Marquis, who had been serving as Bolton’s spokesman outside the Trump administration.

Contrary to Bolton, Fleitz did not cut an enormous figure on the cable news circuit prior to joining the National Security Council.

But an interview on Fox from December is instructive. On that program with Martha McCallum he called the Russia probe a “Democratic trap.” He also touted his close friendship with Michael Ledeen, who co-authored a book with embattled former National Security Advisor Michael Flynn, Bolton’s predecessor.

Ledeen has said that Iran, not Iraq, should have been the first-order priority for the Bush administration’s war on the “axis of evil” in 2003. In his book, he floated Iranian complicity in 9/11 and wrote: “When you hear ‘Al Qaeda,’ . . . It’s probably wise to think ‘Iran.’”

The Treasury Department announced fresh sanctions on the country Wednesday.