Who Pays for Uncle Sam’s Deficits? 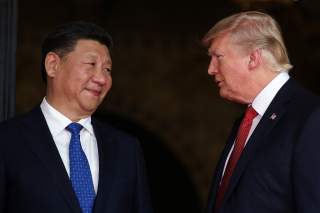 United States President Donald Trump continues to make a big deal of American trade deficits with China despite such bilateral deficits or surpluses being irrelevant. They are irrelevant in part because a significant amount of what Americans buy from China includes components imported by China from other countries. However, what should Americans think about the more important global U.S. trade deficit in April 2018 of $573 billion, up from $520 billion the previous year from May 2016-April 2017? What would happen if the United States could get rid of it and how might America do that?

The short answer comes from the fact that the U.S. trade deficit more or less financed Uncle Sam’s fiscal deficit. In fact, foreigners own almost half of the cumulative outstanding U.S. Treasury debt of $14.84 trillion (i.e., $6.17 trillion). Virtually the only way to get rid of American trade deficits is to get rid of the U.S. fiscal deficit. During President Trump’s first year in office, however, the federal government’s deficit rose from $585 billion in 2016 to $666 billion in 2017 and is projected at $804 for 2018.

At the end of April, the U.S. public debt was $21 trillion or 109% of America's total gross domestic product (GDP). Of that, $15.3 trillion was held by the public, and the rest was primarily held by the Federal Reserve Banks and the Social Security Trust Fund. The U.S. government paid $458.5 billion in interest on its debt outstanding in the most recent fiscal year of 2017. As interest rates rise over the next few years, this will at least double over the next decade. China holds about $1.2 trillion of this debt, meaning that it has helped the U.S. government finance its debt to that extent.

The U.S. fiscal deficit (which is the flow of new debt per period) was $666 billion—3.5% of GDP—for the Financial Year 2017, which ended in September. If America's budget balances over the business cycle as it should, the United States should have had a surplus of about that much at this point because the economy is fully employed. The forecast deficit for 2019 and beyond is one trillion dollars per year as far as the eye can see even with a Republican Congress and Administration. This is not sustainable and will eventually collapse of its own weight.

Money spent by the government is at the expense of the other ways that money could have been used. Usually, the money government spends is taken away from other would-be uses by taxing the public and using those taxes to finance their spending. Unfortunately, this is not normal anymore, and instead, the U.S. spends more than its tax revenue. This means that the money borrowed to cover deficit spending is also taken away from other uses. To see the relationship between U.S. trade deficits and fiscal deficits, Americans need to review who pays for these government expenditures not financed by tax revenue—who finances U.S. deficits?

If broad categories are used, there are four potential sources of such financing. The first is the Federal Reserve. America's central bank buys (finances) government debt when it wants to increase the money supply. During the great recession, the Fed bought a vast quantity of debt (around $4 trillion) but paid interest to banks that keep their "excess reserves" at the Fed to keep this so-called "base money" from increasing the broader money supply. Normally through public deposits at banks, these purchases by the Federal Reserve would typically produce a substantial increase in the monetary supply. The Fed has now started a program of gradually selling most of that debt back to the market—by not replacing it as it matures over time—meaning it will not be a source of deficit finance for many years.

The second source of financing could come from the general public spending less and saving more in the form of treasury debt purchases. In the three years before the great recession (2005-7) the personal savings rate was about 3% of GDP. That jumped to 6% in 2008 but is now (2017) back down to 2.4%. So increased saving did not finance the government’s $666 billion deficit in 2017.

The third source of financing could come from reduced private investment. When investment falls to finance government spending, it is called "crowding out" and reduces the economy's output in the future. At the bottom of the great recession in 2009, America's gross private domestic investment was $1.9 trillion per year rising steadily to $3.2 trillion in 2017 despite a very slight dip in 2016. Thus deficits were fortunately not financed by a reduction in private investment, and this was thanks to foreigners.

So who put up the money to pay for the U.S. government's spending in excess of its tax revenue? The answer is foreigners did—including China. How do foreigners get the dollars they need to invest in America., including in U.S. treasury debt? To accumulate these dollars, foreign countries must have a trade surplus by selling more to the United States than they buy from America. They can also receive these dollars as investments from the U.S. in the form of capital outflow. For instance, in the fiscal year 2017, the United States had a trade deficit of around $550 billion dollars, and in 2016 it was $502 billion. As mentioned, America's fiscal deficit this last year was $666 billion dollars, and in 2016 it was 585 billion. Thus most of the financing of U.S. fiscal deficit came from America's trade deficit with the rest of the world. Steve Hanke of Johns Hopkins University has summarized these data annually for the last 41 years in a handy table.

If President Trump wants to reduce America's trade deficit with the rest of the world then bilateral deficits—such as with China—are irrelevant as only the global total matters. Trump and America's spendthrift Congress should reduce the U.S. fiscal deficit. This is badly needed, whatever America's trade deficit is. The U.S. economy adjusts at all margins (interest rates, exchange rates, etc.) until the governments financing needs are met. In fact, as I've noted earlier, America should actually be running a fiscal surplus in this full employment phase of the business cycle.

You might wonder why investors in the rest of the world are so eager to invest in the U.S. when U.S. interest rate is so low. Ten-year government bond rates in the U.S. are currently around 2.9% as of June 25, 2018. That is very low compared to say Mexico at 7.7% and Brazil at 11.0%. This is in part because U.S. bonds are still considered safer, with less exchange rate and default risks, than those of Mexico and Brazil. However, with U.S. federal debt at 109% of America's GDP and raising this low-risk premium will not last forever. In Canada, where the government debt to GDP ratio was a modestly more respectable 89.6% at the end of 2017, its ten-year bond rate is 2.35%.

A more important source of foreign demand for U.S. debt derives from the dollar’s role as the primary foreign exchange reserve asset. Because so much of world trade is priced and paid for in U.S. dollars, individuals, firms, and governments hold precautionary balances of dollars just as Americans hold balances of dollars in their bank accounts or piggy banks to make payments between paychecks. Official foreign exchange reserves alone (those held by governments and their central banks) currently amount to $11 trillion, over 60% of which is in U.S. dollars. These dollar foreign exchange reserves are invested mainly in "relatively" safe U.S. government securities.

While governments generally accumulate foreign exchange reserves for the usual precautionary reasons, it is also true that some have gathered more than can be justified for preventive purposes. For example, in the early 2000s, China intervened massively in the foreign exchange market to prevent its currency from appreciating, which would have made China's exports more expensive in the U.S. and its imports cheaper in U.S. dollar terms. By 2007 China had a current account surplus that was 10% of its GDP. As a result of this mercantilist, export promotion policy China's foreign exchange reserves skyrocketed from less than $0.2 trillion U.S. in 2000 to around $4.0 trillion in 2014. As a result of significant capital outflows from China, last year its foreign exchange reserves fell from $4 trillion to $3 trillion by the beginning of this year as it intervened in the reverse direction to prevent its currency from depreciating. In fact, in the first quarter of 2018 China had its first current account deficit since joining the World Trade Organization (WTO) in 2001.

Therefore, in addition to reducing deficits, and strengthening enforcement of the rules of the WTO on China, the international monetary system would benefit from replacing dollars as the primary international foreign exchange reserve asset with the IMF’s Special Drawing Rights.

Dr. Warren Coats is a fellow at the Johns Hopkins Institute for Applied Economics, Global Health, and the Study of Business Enterprise.