Who Speaks for Afghanistan’s Women Under the Taliban? 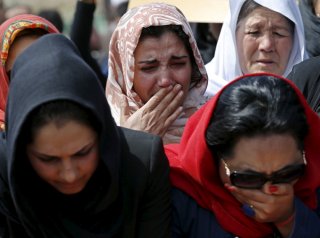 Over the last weekend, hundreds of Afghan women belonging to Kabul’s Shaheed Rabbani Education University marched the streets of Kabul holdings placards and signs. This march was undertaken in support of the Taliban, its strict interpretation of Islam, its strict gender segregation rules, and its structure of governance that guarantees women second-class status.

Conveniently, while the new Taliban regime has banned public demonstration there was no opposition to the pro-regime women’s rally. If footage of the march is anything to go by, the gun-trotting members of the Ministry for the Propagation of Virtue and Prevention of Vice went to extra lengths while providing cordons and a smooth passage to these burqa clad women as they marched towards their destination—the Shaheed Rabbani Education University.

Later, these burqa-clad pro-regime demonstrators filled the university’s auditorium and spoke at length extolling the virtues of the conservative laws and why it is good for Afghan women.

This march and the debate that took place afterward by the marching women were poignant for two reasons. First, the demonstration, held on the twentieth anniversary of the September 11 attacks, was a stark reminder of how, despite two decades and more than $780 million spent promoting women’s rights, all Afghan women don’t seem convinced of the liberal idea of gender equality. Second, it questioned the very efficacy of the West’s engagement in Afghanistan, which perpetually maintained “women’s rights as a reason for continuing the war in Afghanistan” long after the Taliban was toppled in 2001.

Once we go past these two key observations there are several other fundamental issues relating to Afghan women and their critical views towards the new power formulation that we simply cannot ignore.

The Future of “Us”

It would seem that the politics of sisterhood is a complicated affair in Afghanistan. Just like the Taliban is beset by infighting, the country’s women seem to be a divided lot. A few of the participants who subsequently addressed the audience made it a point to criticize those Afghan women who have recently opposed the new government, its ideological disposition, and its structure of governance.

Some of the pro-Taliban women speakers made it evidently clear that “they [those protesting against the Taliban’s regressive position on women’s rights] do not represent all of the women of Afghanistan.” While demanding that all women in Afghanistan fall in line with the new ideological disposition, another speaker asked the country’s women to “obey the Taliban’s new dress code for women, uphold the segregation rules introduced by the regime and be good citizens.”

Of the hundreds of placards and signs that the pro-Taliban women’s rally sported, one was particularly striking. It read: “Women who left Afghanistan cannot represent us.” This sentiment was echoed by the first female speaker at the rally. Covered from head to toe, she warned, “We are against those women who are protesting on the streets, claiming they are representative of women.”

Granted, the whole march and the ensemble could have been a Taliban public relations stunt. How else would one decode one of the banners in the rally that read: “We are satisfied with attitude and behaviour of Mujahideens!” The entire gender rights issue in Afghanistan has become polarized. It is becoming an ideological battle, where one group of women protesters are protesting another group of women protesters. At the same time, these competing narratives are being sponsored by two sets of ideological patrons—one from within and the other from outside.

The Struggle for Afghan Women’s Soul

Plenty of us would like to argue that this was a stage-managed occasion. It could be that, in all likelihood, the participants were forced by the Taliban to take part in such a rally. Perhaps the participants were under duress and had no choice but to carry pro-Taliban slogans and express their solidarity with the new regime’s ideology. Granted, in a world dominated by fake news the pro-Taliban women’s march might have been an orchestrated affair. It could also be that these women were perhaps brainwashed and simply parroted the voice of the preeminent power—as is usually the case with the vulnerable constituencies while living under authoritarian regimes anywhere else in the world.

Then there are some alternative views that speak of the transformational attitudinal change of people who have lived under the shadows of war and perpetual domination for generations to consider. While not entirely discounting the pro-Taliban sentiments of some Afghan women, some observers have come to point out that “they are like birds born in cages who are so conditioned by their imprisonment that they have come to associate flying as an illness.”

Then there are others who have pointed out that such marches hid beneath it a deeper secret—most marchers and participants were Taliban men clad in abayas and burqas. But before we disregard this event as banal and absurd or laugh it off as a sham march, we also need to ponder the possibility that this was a genuine expression of a constituency of Afghan women’s sentiments under the current disposition.

Could it be that in a tradition-bound society such as theirs that the majority of Afghan women are generally comfortable with the idea of having a position in the society that we consider second-class status? Lest we forget every Talib is borne out of a woman. They have sisters, wives, and mothers at home. Could it be that these very women are perhaps sympathetic to their male relatives’ patriarchal, toxic masculine worldview? If women in some contemporary “open” societies can treat their girls as less equal than boys and engage in female infanticide, the mainstream Afghan women’s acceptance of gender equality is a reflection of that trend albeit in another cultural and geographical setting.

Women to the Rescue

The struggle of Afghan women to find a place of their own under the Taliban’s rule is likely to be a long and arduous one. Take, for instance, the views of Marjana Sadat, a freelance journalist who has worked with Voice of America and other media outlets. She said she was out shooting at Kabul University on August 15, the day the Taliban took over. But witnessing their violence and brutality she soon “realised that these men have a hatred, a grudge against women, and that we will never be able to return to normal.”

While the struggle between pro- and anti-Taliban Afghan women continues, it is worth asking: Who has the right to speak for the Afghan women and their rights in this new Afghanistan? Whose is the authentic voice? What should be our cosmopolitan responsibility in relation to Afghan women’s rights question? Should the Afghan women quietly accept the new restrictions on their previously enjoyed rights and liberties as a fait accompli?

Whatever view the Taliban holds on the rights of the country’s women, it cannot escape some hard realities. Nearly 43 percent of the country’s 38 million people are women. If the Taliban is serious about successful governance and seeks to achieve a semblance of progress in the country, it cannot accomplish those objectives by terrorizing its women and treating them as chattel—only good for giving birth. Similarly, those Afghan women who support the Taliban’s restrictions on women’s rights and freedom also need to be mindful of the fact that they are complicit in pushing society into a medieval setting.

It is deeply ironic that ever since the Taliban’s takeover of Afghanistan, the country’s men have not protested the new regime and its draconian rules. Whatever peaceful demonstrations there have been—be it for the protection of women’s rights, against Pakistani interference in Afghanistan’s domestic affairs, or in support of the Panjshir resistance—they have all been orchestrated and undertaken by Afghan women. Perhaps they are the last line of defense against the country sliding into the abyss and the only hope for its future.