Who Wants What in the Syria Negotiations 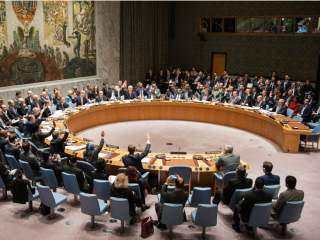 On Friday, John Kerry convened a high-level session of UN Security Council member states’ foreign ministers to build on the diplomatic momentum that came from the October and November Syria talks in Vienna. Late afternoon Friday, Kerry, Russia’s Sergei Lavrov, France’s Laurent Fabius and the UK’s Philip Hammond reached agreement on a draft Security Council resolution, recognizing the Geneva II communiqué as the guiding principles of a possible settlement, and endorsed the timeline for such a process agreed upon in Vienna last month.

While upon initial glance the resolution text is more a canonization of the status quo than any substantive change, there’s more than meets the eye. First, in a sign of unanimity, the Security Council reaffirmed both the understanding reached at Geneva II (a secular representative democratic Syria) and the timeline for reaching a political settlement (elections within eighteen months and a transition government agreed in six months). Despite pressure by Tehran to void critical components of Geneva II, Iran's efforts to push for a national unity government headed by Bashar al-Assad instead of a transition along the Geneva communiqué were foiled.

Second, the resolution recognized Saudi Arabia’s steps in organizing the opposition for the expected January Vienna talks between the opposition and President Assad’s government. While differences remain, namely between Iran, Turkey, Russia and Saudi Arabia over who constitutes the legitimate opposition, recognition of the Kingdom’s efforts to build unity amongst the political and armed opposition is a positive step. While the Kremlin may have its objections, Moscow didn’t seek to invalidate the Saudi process in the resolution text. Their recognition of Jordan’s role in defining which groups should be defined as a terrorist group, instead of as an opposition group, is important as well.

Third, the resolution endorses a ceasefire to begin concurrently with the political negotiations. While such a ceasefire is a trying feat to reach under normal circumstances, it will be even harder with differences between the U.S.-led anti-ISIL campaign and the Russia-Iran campaign over which groups are considered terrorist groups and therefore excluded from the ceasefire. Amman has made small steps to bridge these differences, but concessions will need to be made to ensure that any ceasefire reached isn’t derailed by differences of interpretation.

For example, the draft resolution recognizes the UN’s role in monitoring and implementing the ceasefire between Damascus and the opposition, but avoids touching on how the UN should operate in areas where the opposition is blended with groups such as Ahrar al-Sham, which Moscow recognizes as a terrorist group and has targeted.

Despite these areas of closer agreement, the most critical point of contention—President Assad’s future—remained unresolved. The Riyadh-organized opposition insists that Assad should have no power in the mutually agreeable transitional government. This position stands in sharp contrast to Russia and Iran, who have not supported any moves to condition Assad’s tenure in power at these negotiations.

The United States, the UK and France have taken somewhat softer positions. White House officials have expressed publicly and privately a willingness to consider Assad staying in power during a transition, if there’s an agreed-upon end date to his tenure in office. President Obama acknowledged at his end-of-the-year press conference Friday that Russia and Iran’s “equities” need to be considered in any political transition in Syria. While Paris has privately indicated openness to consider Assad’s role in a transition, foreign minister Laurent Fabius insisted on Friday in New York that Assad must go at the end of the transition and that such an understanding should be reached in these negotiations.

Regional governments’ positions have varied. Saudi Arabia and Jordan have expressed willingness to consider President Assad having a role in the transition for a limited time, if enough power is devolved away from him. Senior regional officials have indicated they would support an associate of Assad taking part in a transitional government but that Assad himself cannot be part of the transition.

These positions are also reflected in the various parties’ views on the UN elections endorsed in the resolution. While the resolution text outlines a UN monitored election, composed of Syrians in country and those in the diaspora, it leaves unresolved Assad’s fate post-transition and whether he can run in the elections. Optimistically, with these elections being monitored by the UN and have to be endorsed by the transitional government of mutual consent of both sides, one can potentially assume that he wouldn’t win reelection and his fate would be decided this way. Pessimistically, as members of the opposition point out, Assad may find a way to hold onto power and thus don’t see it possible to sign onto a political process with the Syrian president still being part of it.

These sticking points, along with the broader challenges even on issues where the parties find closer agreement, leave one less optimistic that the negotiating parties can reach a settlement of Syria’s civil war in the timeline outlined in the resolution. That said, if all the parties go into the January talks without preconditions on either side and with a commitment to the timeline, there may be an opportunity to build diplomatic momentum to bridge these gaps.

Assad’s fate, though, will continue to bedevil this process. If it is true that Moscow could be willing to ensure that Assad would play no role in the Syrian government post-transition, that would be a positive step. However, no signs indicate that Tehran has come to this position and it remains to be seen how much influence Russia can exert on Iran to adjust its stance. President Assad’s reported end-of-year visit to Tehran could be an opportunity for Ayatollah Khamenei to have a frank discussion with the Syrian president about his future—or it could be an opportunity to show support for Assad despite Iran’s growing battlefield losses.

With little appetite in the White House to put more military pressure on reaching a settlement, 2016 will be a year of seeing if diplomacy, as seen most recently in New York, can bring an end to almost five years of bloodletting. In lieu of this, the battle lines will continue to harden to the benefit of ISIS.

Andrew J. Bowen, Ph.D., is a Senior Fellow and the Director of Middle East Studies at the Center for the National Interest.